New sidewalks, street lights and other improvements have been added to the lower end of Niagara Street.

But that hinges on a decision in a downtown courtroom Friday.

The state wants to demolish the Shoreline Apartments, a cluster of corrugated concrete units it claims are structurally unsound, leaking and costly to heat, and replace them with new low-income housing. Many also consider the complex's Brutalist-style of architecture to be ugly.

But a former tenant and a preservationist are trying to stop those plans from going forward.

John Schmidt was the last tenant to leave the Shoreline Apartments on Jan. 12, after being escorted out by three Buffalo policemen. He and Terrence Robinson, a member of the Buffalo Preservation Board, want a State Supreme Court judge to annul the city's Planning Board's approval of the redevelopment plan.

They also want to set aside the Buffalo Preservation Board's approval to demolish the apartments, claiming local, state and federal regulations were ignored.

But some other former tenants said the demolition and redevelopment are overdue.

"I think the buildings have pretty much served their purpose. The physical plant is deteriorating," said Stephen Williams.

Williams is one of 172 tenants or families Norstar Development USA moved to other low-income housing to clear the way for demolition and the new housing. He gives Norstar high marks.

"They were diligent property managers," he said. 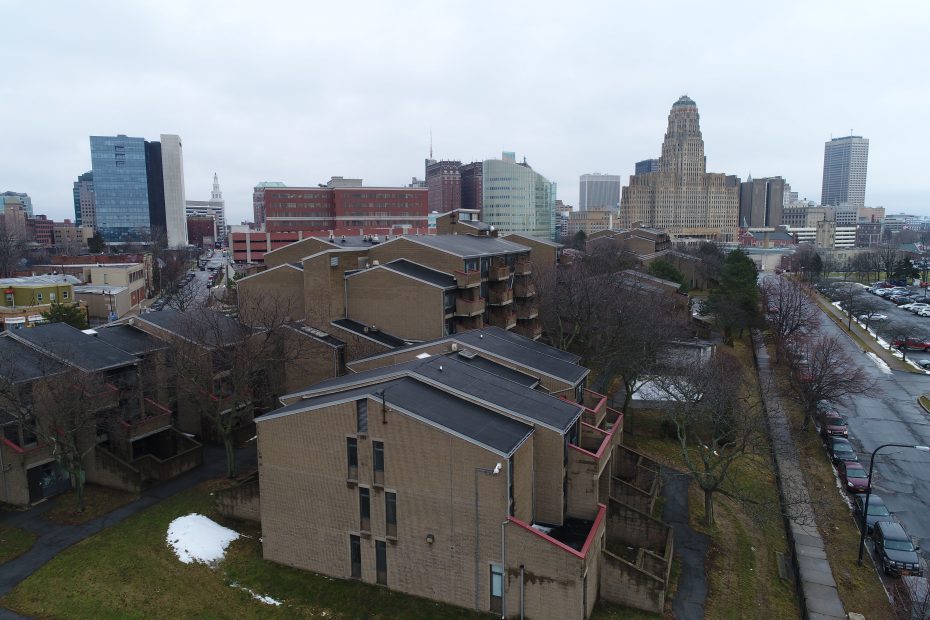 An aerial shot of the Shoreline Apartments taken by a drone. (Derek Gee/Buffalo News)

Modernist architect Paul Rudolph designed the Shoreline Apartments. But even with Rudolph's lofty reputation, city and state preservation authorities approved the demolition in part because of the apartments' deteriorating conditions and because of the costly repairs required.

Five of the run-down buildings were torn down in 2015 to make way for new public housing. Demolition of the remaining 16 buildings is expected to begin later this year if Norstar is successful in court.

That would set the stage for new low-rise apartments and townhouses, totaling 214 one-, two- and three-bedroom units. They would be expected to be ready for occupancy in 2020.

Shoreline Apartments were completed in 1971 by a state agency as subsidized, low-income homes. Hundreds of acres on the West Side had been laid bare in a slum-clearance project that began in the late 1950s, a familiar sight from the Northeast to the Midwest.

That left plenty of land for Rudolph to design the housing complex. Still, much of what he designed – including a community center, public space and school – never were built.

Rudolph, a former dean of the Yale School of Architecture, designed the fortress-like Earl W. Brydges Library in Niagara Falls that opened in March 1974. Like Shoreline, it, too, suffered from water damage.

The problems experienced in Niagara Falls were well known to Shoreline residents.

"When it would rain, it would leak through almost every single window, and the patio door as well," said Migdalia Sanchez, who moved out of her apartment and is now living in one of the new units on Carolina Street.

There were other problems, too, Sanchez said. Dampness made the paint bubble. The patio was cracking. The rooms were dark. The sounds of neighbors transferred loudly between apartments.

The interconnected buildings, with their dips and turns, also created a security problem for police attempting to catch people involved in criminal activity.

And then there was the heating.

"It was built with electric heat in the 1970s, when it was thought Niagara Falls would give everyone cheap electricity forever," said Linda Goodman, senior vice president of Norstar Development USA, the property's owner since 2005. "The buildings have not been operationally sustainable." 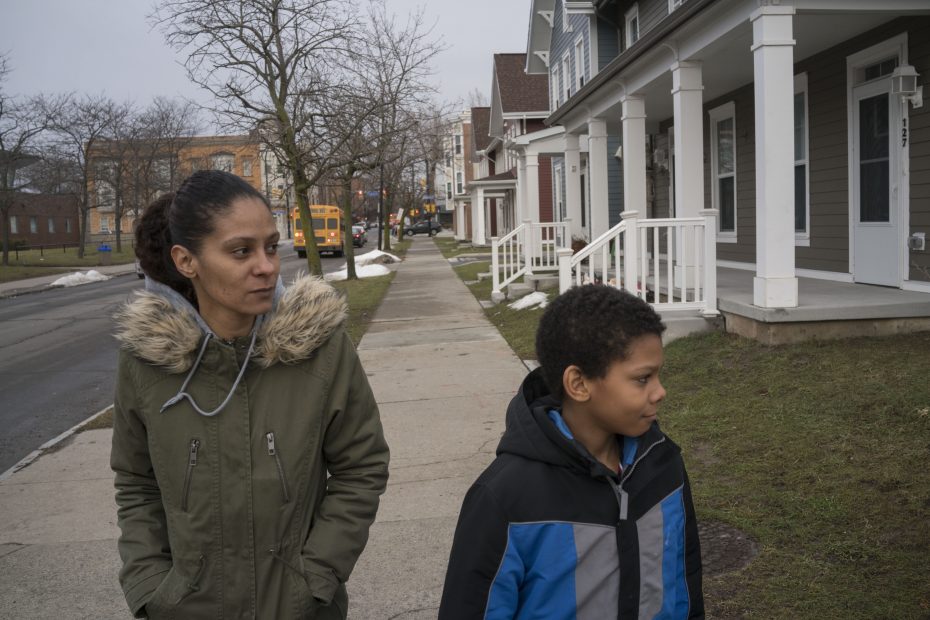 Migdalia Sanchez walks with her 10-year-old son Malikai outside their new apartment on Carolina Avenue in Buffalo. They moved in one year ago after being relocated from the Shoreline Apartments. (Derek Gee/Buffalo News)

When Shoreline opened, it had 472 units. That number dropped to 337 in 2004, after 89 units were closed due to a lack of funds for repairs. The complex also suffered through the years from deferred maintenance.

Goodman said the only good solution was to tear down the old buildings and replace them with new ones.

"We all believe that in order to preserve quality affordable housing in the downtown business corridor, we need to build new housing for our residents," she said.

Tenants were moved under a relocation plan and given financial assistance. Many moved into New York State Homes and Community Renewal-administered affordable housing units. The majority were eligible for and offered Section 8 vouchers.

All of the new units will be classified as affordable housing. Former residents can reapply to move back but must qualify under the new tax rules.

"Based on our last review, all the tenants do qualify," Goodman said.

Schmidt, the last tenant at Shoreline, was a long-haul trucker until he became disabled after a series of heart attacks in 2006. Now 59, he has been on permanent disability, but recent health improvements have allowed him to take work as a security guard.

Schmidt is currently living with friends while waiting to move into an apartment at North and Elm streets. He said he may put in an application to move into one of the new buildings when it becomes ready, but doesn't see the need for them.

"There isn't anything wrong with the buildings," Schmidt contended, shortly after moving out. "These buildings were built to last 100 years, and they would have if they hadn't been deliberately destroyed by Norstar."

Schmidt blames a "corrupt" political financing system, suggesting political contributions made by Norstar allowed the project to go forward. He offered no evidence that had occurred.

Goodman said the company offered Schmidt a comparable apartment and a stay in a hotel if he had to wait for the apartment to become available.

Terrence Robinson, a member of the Buffalo Preservation Board, also believes there were political machinations afoot.

But Robinson said he became involved with the legal case principally because he believes Rudolph's architectural work is worth saving.

"His work is not exactly my cup of tea, but he was a significant architect," Robinson said.

"What really hooked me was when I did a visual inspection and looked back from the tower at the end of the marina where you can see the whole quadrant of downtown Buffalo," Robinson said. "It actually reflects the influence of the Shoreline apartments, and their geometric, cubist look.

"Their presence also gives Buffalo a full palette of architecture," he said. "Everyone talks about Frank Loyd Wright at the start of the 20th century, but this completes the 20th century piece with major American architects all the way through. It's not just significant in and of itself, it's significant in completing a full catalog of our major architects."

The Buffalo Preservation Board has a history of going to bat for beleaguered preservation projects. But the members didn't this time.

The majority of the board voted to approve demolition of Rudolph's Shoreline Apartments.

"A lot of people felt they were inappropriate as public housing, and didn't deserve landmark status," said Paul McDonnell, the Preservation Board's chairman. "They had deteriorated to a point where they would have been expensive and difficult to renovate – much more than if they were built in a conventional style."

McDonnell said the many problems afflicting that site added to the thumbs-down vote, even though it was determined to be eligible for inclusion in the National Register of Historic Places in 2008. And Brutalism, he acknowledged, is not a popular architectural style many preservationists want to rally behind.

"Brutalism is not necessarily an appreciated style," McDonnell said.

The state Office of Parks, Recreation and Historic Preservation also concluded the buildings no longer had a realistic future.

"It is unquestionable that the loss of this massive work by Paul Rudolph will have a profound impact on Buffalo's architectural legacy," John Bonafide, director of the Technical Preservation Services Bureau, wrote Norstar in March 2016. "However, it is also evident that Rudolph's visionary but inflexible design of the complex limits reasonable opportunities to correct the structural and environmental issues associated with it."

Instead, the state office recommended "meaningful mitigation measures" to "offset the loss of this resource." That's since been determined to be a public kiosk and the exhibiting of a fragment from the site.

Sanchez, meanwhile, said she's thrilled with her new home near the corner of Niagara and Carolina streets.

"It's a big-time improvement," Sanchez said. "My gas and electric are really low, I never feel the cold air from outside, my kids and I are are happy with tons of closet space, including two walk-in closets."

She's also excited to have a washer and dryer in her apartment instead of sharing one, and a dishwasher.

As for the old apartments, "I am happy they are knocking them down," Sanchez said.

"It was so easy for the rats and cockroaches to go from one apartment to the next, it was insane," she said. "The maintenance people tried their best, but with all the apartments interconnected they couldn't really do much."