One of my duties as your designated eater is to seek out worthwhile new dining opportunities. Another is highlighting restaurants that have been making people happy for decades.

That's what led me to the Old Orchard Inn, serving from its East Aurora hillock since 1931. "The last of the great escapes," its website calls it. Old Man Winter dimmed its pastoral pleasures somewhat, but after teetering up the sloping path from the iced-over parking rink to the front door, I was certainly glad I escaped unscathed.

What drew me was the promise of old-fashioned goodness, like chicken fricassee, which I had first enjoyed from a Fanny Farmer turn-of-the-century recipe. Fricassee was present when my predecessor reviewed the restaurant two decades ago, and it remains on the menu today.

When the dish arrived, I was reminded that it may be unfair to expect present-day plates to measure up to my time-gilded memories of past delights. 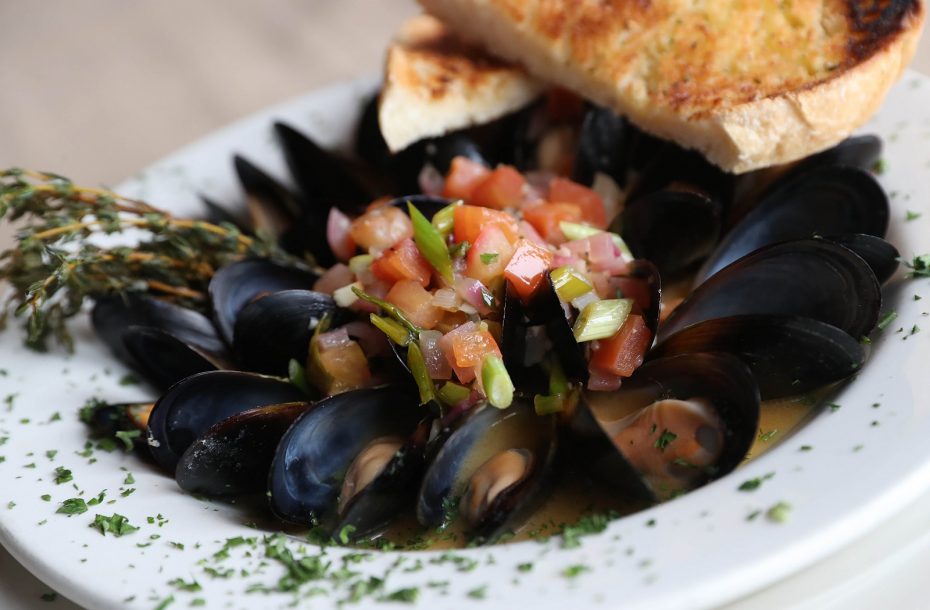 Old Orchard Inn's steamed mussels are one pound of mussels in a broth with Roma tomatoes, green onions, fresh garlic and a hint of thyme. It is enhanced with sweet cream butter and served with toast points. (Sharon Cantillon/Buffalo News)

From its décor to its central draw, everything at the Old Orchard Inn is seasoned with age. Built as a hunting lodge in 1901, converted to a tearoom in 1931, was a half-century old before it was purchased by its current owners, the Romanello family. Once operators of Romanello's Roseland and Romanello's South, the family has run the East Aurora restaurant for 20 years.

Maybe with all that history, everyone knows how the place works. But when I walked in the door on a busy night, there was no one to greet me and I didn't know where to stand. Eventually a staffer saw me looking lost and sorted me out, with a table in the bar room, where a pair of lanterns in an oxen yoke hangs over the bar.

There, a waitress took our drink orders. A generously proportioned gin martini ($7.75) was served two-handed, its stemless glass suspended in a larger glass of ice cubes. She was otherwise scarce, taking our food order about 30 minutes after my guests arrived. A basket of chewy baguette and ramekin of butter arrived soon after.

In other places, the menu has been updated, sometimes to negligible effect. A half rack of baby back ribs ($20) braised in chile, lime and ginger got Napa cabbage slaw. That was a fresh touch, and the slaw was a refreshing change, but I couldn't detect the interesting braising partners on the tender ribs. We asked for ahi tuna sashimi ($15), but it never appeared, on the table or our bill.

Smoked gouda and lobster dip with pita points ($14) sang a sultry, indulgent dairy-seafood duet. Crab cakes ($13) were well-browned and mildly flavored. Eggplant wings ($12) were oddly watery inside a stout crumb coat. I still ate a few, proving once again that I am susceptible to anything fried, dipped in Frank's hot sauce and served with a vat of chunky blue cheese dressing. 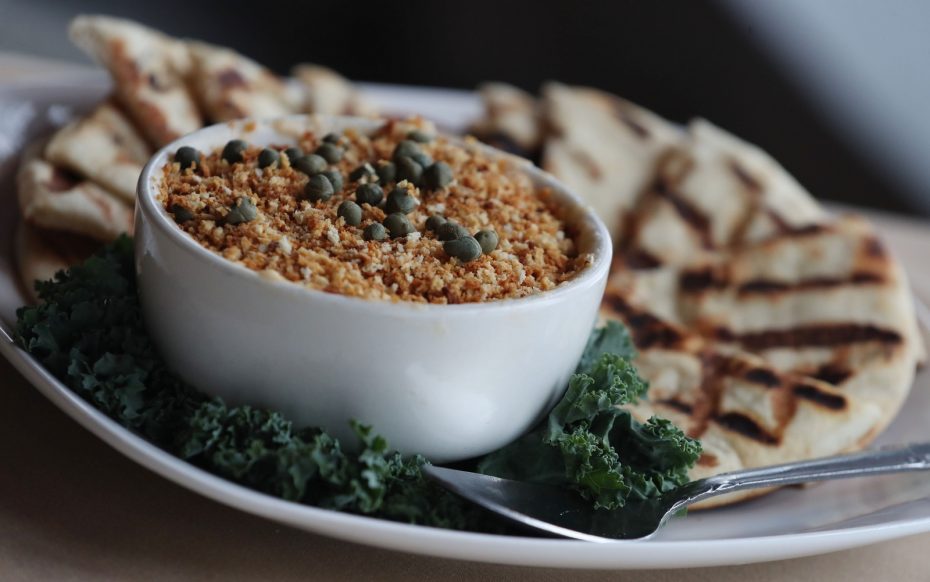 The smoked gouda lobster dip is a creamy dip featuring smoked gouda cheese and chunks of lobster served with Roghani nan and topped with a few capers. (Sharon Cantillon/Buffalo News)

A spinach salad with hot bacon dressing, pecan-crusted goat cheese, beets and hardboiled eggs ($12) was a grab-bag of flavors and temperatures. The beets were cold, the goat cheese and dressing tasty but room temperature.

Entrees were more consistent. A New York strip ($36) with frizzled onions was well-seasoned, arriving medium instead of medium-rare. A plate called Cab Calloway ($36) was my favorite, filet medallions with grilled shrimp, garlicky sautéed spinach and gorgonzola sauce, kicky enough to bring my fork back. 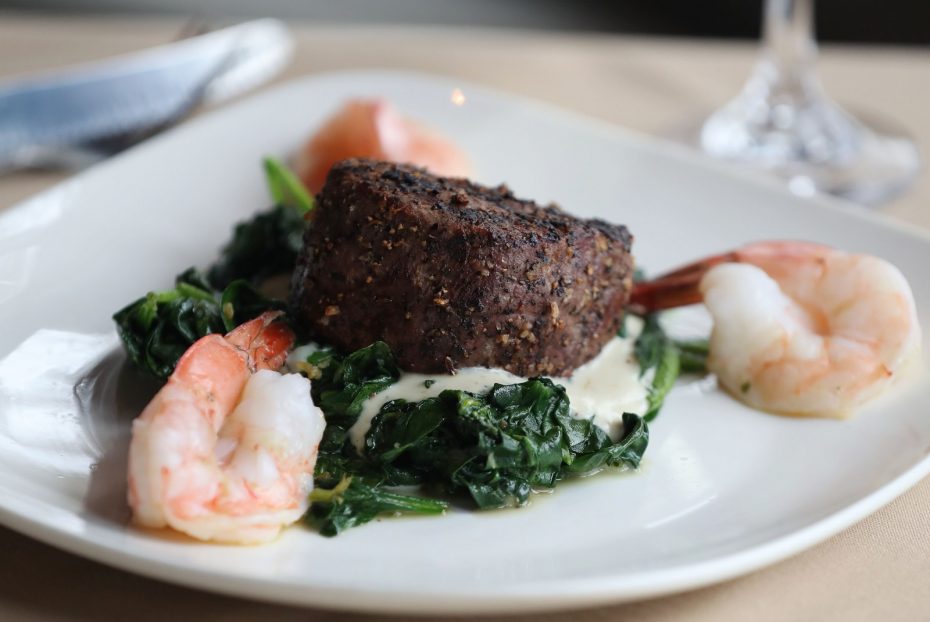 The Cab Calloway is 6 ounces of the best filet mignon they offer backed up by a grilled shrimp ensemble. It's served on a bed of sauteed spinach with a gorgonzola cream sauce. (Sharon Cantillon/Buffalo News)

A side of sautéed zucchini and summer squash was mushy and room temperature. Mashed potatoes perked up with horseradish were a delicious departure from the ordinary.

Chicken pot pie ($19), was exactly what I hoped for: a crock of creamy chicken stew with carrots and peas topped with bronzed puff pastry. That chicken fricassee ($20) wasn't. It was a heaping helping of partially boneless skinless chicken breast in a mild chicken gravy, on biscuits.

Nothing broke its beige monotony, not a mushroom, or onion, or the tone change of dark meat. The cranberry relish alongside it and other entrees was a fresh, brilliantly flavored consolation. 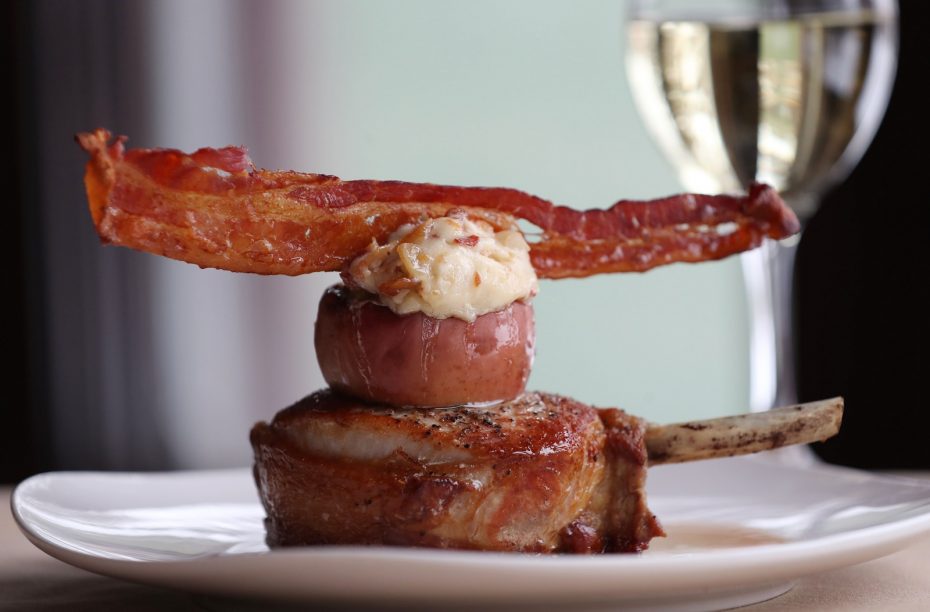 For dessert, we enjoyed a peanut butter pie ($6), a Lemon Angel, meringue with lemon curd ($6), and an excellent bread pudding with bits of figs, orange and spice with caramel and crème anglaise sauces.

Overall, I would have been happier with swifter service and warmer meals. I'm all in favor of old-fashioned food, if that label truly applies: food fashioned the old way. Trying the new version of the old favorite too often makes me wish for a time machine for dessert. 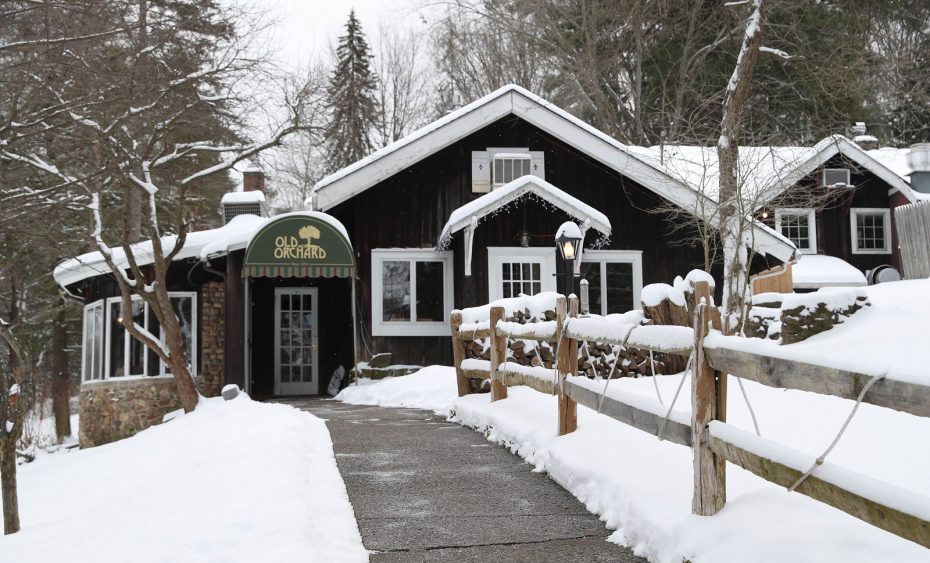 The Old Orchard Inn is nestled in a beautiful country setting at 2095 Blakeley Road in East Aurora. (Sharon Cantillon/Buffalo News)