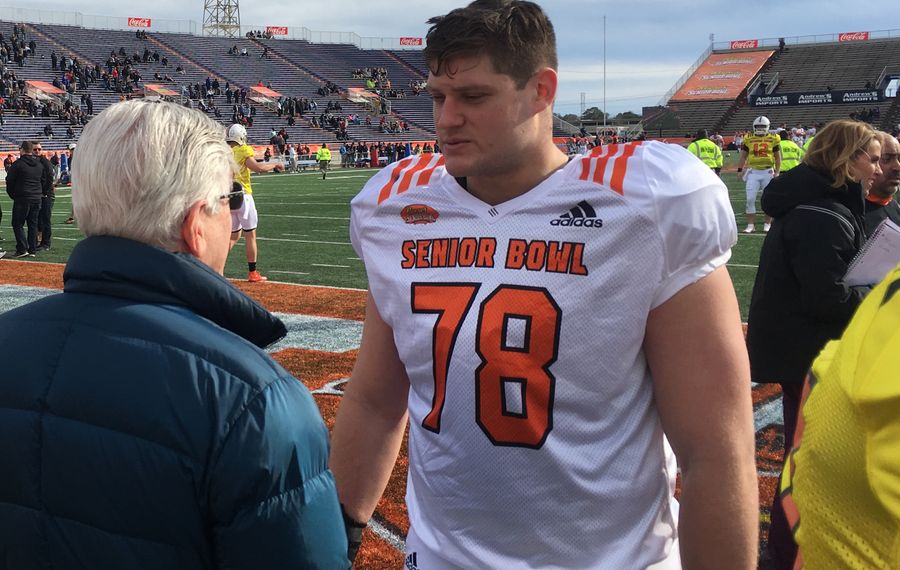 Army offensive tackle Brett Toth is the anomaly among offensive line prospects at the Senior Bowl.

While most college linemen have spent most of their careers backing up as pass protectors in spread offenses, Toth has spent his entire college career going forward as a run blocker.

Army's triple-option offense ran the ball on 92.4 percent of its plays this season.

"It's definitely adversity," Toth said of adjusting to a pass protection. "It's obstacles. But we wouldn’t be here if we weren’t capable of overcoming those obstacles. For me personally it's just repetitions, making up for lost time."

"I want to say last week I definitely pass-set more times than I did the entire season," Toth said. "It's just kinesthetic with your body. You've got to get used to the different movements. It just takes a lot of dedication and focus."

Toth is viewed as a late-round draft pick and may not be picked at all because he has to serve another two years in the Army. He's the first Army player to play in the Senior Bowl in the 67-year history of the all-star game.

However, he's the kind of person any team would be lucky to have in its organization.

"That's my last concern right now," he said of his draft stock. "My first concern is: 1, putting out a good name for West Point, and 2, to develop myself as a player and a person."

Toth's father served six years in the Navy. One of his grandfathers was an Air Force bomber pilot.

"I went to West Point intending to do at least five years of service," Toth said. "I credit what I've become today as a man to West Point. I'm excited to do my two years."

Toth will be able to participate in a team's minicamp this spring because he will be on a 60-day leave after he graduates on May 22.

And he figures to be a quick learner. He's a physics major with a nuclear engineering concentration. He scored a 780 out of 800 on his math SAT exam coming out of high school.

"Brett Toth has been in a three-point stance going this way (forward) his whole career," said Senior Bowl director Phil Savage. "Now all of a sudden he's in a two-point stance trying to protect the edge. That's going to be a real eye-opening experience, but he's got the athletic ability to do it."

Top TE out: North Dakota State tight end Dallas Goedert, a potential first round draft pick and the top player at his position in Mobile, had a short week. He suffered a strained hamstring on one of the first pass plays of Tuesday's practice. He's out for the week.

Also out due to injuries Tuesday are: Western Michigan CB Darius Phillips (ankle), UMass TE Adam Breneman (hamstring) and Virginia ILB Micah Kiser (knee). Kiser won the Campbell Trophy, known as the Academic Heisman. He has a 4.0 grade-point average while pursuing a master's degree in higher education, and he was the Atlantic Coast Conference leading tackler three years in a row. He's a middle-rounds prospect.

"I love coach Daboll, he's awesome," Bozeman said. "He makes us refer to him as Dabes. He's from the pros, so he's more laid back. In college it's usually coach, that's what you're calling them. He interacts with us a lot, figures out what's good for us as an offense, what we like, what we don't like."

Alabama ran a varied running attack, with power or gap schemes designed to outnumber the defense at the point of attack, along with inside zone runs and some outside zones. But it was a departure from the style of the previous year, when coordinator Lane Kiffin (now at Florida Atlantic) ran an outside zone scheme.

"We used to major in outside zones," Bozeman said. "This year we were more majoring in gap schemes. I'm a big fan of it. A lot of it depended on the type of defense we were facing. We faced more four-down last year than 3-4, so we ran a lot of gap scheme at them."

With one hand, Griffin looks to continue journey of defying odds into the NFL