By Scott Cacciola and Victor Mather

LANSING, Mich. — After an extraordinary seven-day hearing that drew more than 150 young women to speak out publicly about sexual abuse they said was committed by Dr. Lawrence G. Nassar, the former team doctor for the American gymnastics team, a judge sentenced him on Wednesday to 40 to 175 years in prison.

Judge Rosemarie Aquilina, who had opened her courtroom to all the young women who wanted to address Dr. Nassar directly, and forced him to listen when he pleaded to make it stop, handed down the sentence, saying to him, “You’ve done nothing to deserve to walk outside a prison again.”

“It is my honor and privilege to sentence you,” she said, and noting the length of the sentence, added, “I just signed your death warrant.”

Given an opportunity to address the court before sentencing, Dr. Nassar apologized and, occasionally turning to the young women in the courtroom, said: “Your words these past several days have had a significant effect on myself and have shaken me to my core. I will carry your words with me for the rest of my days.” Several women sobbed in the gallery as he spoke.

Just before sentencing Dr. Nassar, the judge read parts of a letter that he had submitted to the court last week, in which he complained about his treatment in a separate federal child pornography case and wrote that his accusers in this case were seeking news media attention and money. “Hell hath no fury like a woman scorned,” he wrote in the letter. There were audible gasps from the gallery when the judge read the line.

Dr. Nassar, 54, was accused of years of molesting girls as young as 6, many of them Olympic gymnasts, under the guise of giving them medical treatment. In November, he had pleaded guilty to sexually abusing seven girls. He has already been sentenced to 60 years in federal prison for child pornography convictions.

The case, though, and its ramifications are far from over. It has ignited outrage in the sports world and beyond, leading to the resignation this week of the chairman and several board members of the governing body for gymnastics in the United States, USA Gymnastics. Last week, the organization cut ties with the training center at a remote Texas ranch where many cases of abuse occurred.

There have also been calls for the resignation of the president Michigan State University, where Dr. Nassar spent decades on the faculty and treated its athletes, as well as members of the United States national gymnastics team. The NCAA on Tuesday formally opened an investigation into the university’s conduct.

A number of civil lawsuits have also been filed.

The sentencing hearing itself garnered much attention for extending over several days, streamed live on the internet, to allow for what are known as victim impact statements from girls and women who he is accused of molesting over the years. Many of the victims had not previously identified themselves. Initial plans to conclude after four days were altered as more women who have accused Dr. Nassar of abuse came forward.

Judge Aquilina was a fierce advocate for the victims, often praising or consoling them after their statements. The hours and hours of victims speaking candidly about their abuse unexpectedly turned the hearing into a cathartic forum. Dozens of women who had remained silent came forward with accounts of abuse. 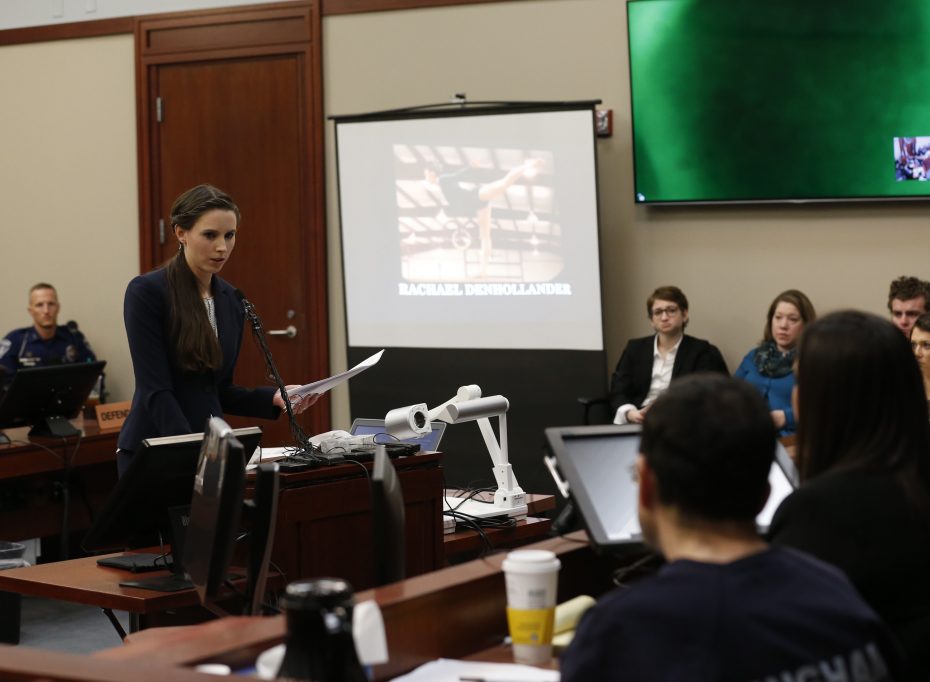 Rachael Denhollander, who was one of the first women to come forward with public accusations against Dr. Nassar, was the last to speak at his sentencing hearing. (Jeff Kowalsky/AFP/Getty Images)

Among those who have accused him are the Olympic gold medalists Aly Raisman, McKayla Maroney, Gabby Douglas, Jordyn Wieber and Simone Biles.

The final three of 156 victims spoke on Wednesday. Rachael Denhollander, who was one of the first women to come forward with public accusations against Dr. Nassar, was the last to speak at his sentencing hearing. “Larry is the most dangerous type of abuser,” she said. “One who is capable of manipulating his victims through coldly calculated grooming methodologies, presenting the most wholesome and caring external persona as a deliberate means to ensure a steady stream of young children to assault.”

Judge Aquilina praised Ms. Denhollander for opening the floodgates. “You are the bravest person I have ever had in my courtroom,” she said.

“Imagine feeling like you have no power and no voice,” Ms. Raisman said in court on Friday. “Well, you know what, Larry? I have both power and voice, and I am only just beginning to use them. All these brave women have power, and we will use our voices to make sure you get what you deserve: a life of suffering spent replaying the words delivered by this powerful army of survivors.”

“I was told to trust him, that he would treat my injuries and make it possible for me to achieve my Olympic dreams,” Ms. Maroney said in a statement read by a prosecutor on Thursday. “Dr. Nassar told me that I was receiving ‘medically necessary treatment’ that he had been performing on patients for over 30 years.”

“Dr. Nassar was not a doctor,” she said. “He in fact is, was, and forever shall be a child molester, and a monster of a human being.”

As part of a lawsuit settlement, Ms. Maroney had signed a nondisclosure agreement with USA Gymnastics that would have caused her to be fined more than $100,000 for speaking about the abuse. After several celebrities offered to pay the fine for her, the organization said it would not fine her, and she was able to make her statement.

Ms. Wieber made a statement in person on Friday, saying, “Nobody was protecting us from being taken advantage of. Nobody was ever concerned whether or not we were being sexually abused.”

Dr. Nassar objected to the many statements, saying that Judge Aquilina had turned the hearing into a “media circus.” The judge dismissed his complaint. “Spending four or five days listening to them is significantly minor, considering the hours of pleasure you had at their expense and ruining their lives,” the judge replied.

A lawsuit has been filed by scores of victims against Dr. Nassar, USA Gymnastics, the sport’s governing body, and Michigan State University, where he worked.