On Monday, Jan. 14, 1985 I arrived at WIVB in something of a funk. The winter up to that point hadn’t been a total dud for a meteorologist new to Western New York, but not much was happening.

I think I had a low-grade fever, the blahs had invaded my soul, and as far as I knew coming into work it was going to be a gray, dull week.

Then, along came the National Weather Service in Salt Lake City to exorcise my funk.

It so happens the Salt Lake City Forecast Office took it upon itself to compose an extended range discussion on weekdays. My bleary eyes went first to this discussion and, I’m paraphrasing now, I read “upper air pattern ominously shifting toward a long-wave amplitude analogous to that of December 1976-January 1977.” BOOM! My funk was eviscerated and Adrenalin began to flow.

After poring through what data and primitive model output was available back then (it didn’t seem so limited at the time), a couple of hours later I was convinced that come around Saturday, some part of Western New York was going to get blasted.

To this day, I’m not convinced I would have seen these signs so early had it not been for the Salt Lake City discussion, so I remain historically grateful.

I went on the air at 6 full of something and vinegar about this huge pattern change, and probably was over-energized over the whole matter. After all, a big lake-effect storm was one of the dreams which brought me to Buffalo from my second tier position for five years in Detroit. It now appeared such a storm was coming to fruition.

By the next day and for the rest of the week, I calmed down and remained steady in advising folks our lives would be shaken up by the pattern change on Saturday. Thankfully, the incoming data supported a pretty high confidence forecast each day that week.

By Thursday, the Buffalo National Weather Service began issuing special weather statements on the storm, and followed with a Winter Storm Watch on Friday, and then upgraded to a Warning. Game on! I The storm was our lead story Friday night. We were predicting high winds, blinding snow, and a brutal wind chill following passage of an arctic cold front Saturday morning.

It so happens, our newsroom had a Saturday morning meeting with our Cleveland-based consultant at the old Saratoga restaurant on Delaware Avenue. While we snacked, curtains were drawn while we were still on the warm side of the cold front, and we watched endless video tapes of other stations in other cities doing things differently than we were doing them here. It took on a yadda yadda quality for me.

I really wanted to open the curtains and see what was going on outside. The cold front should have busted through, and this guy just kept talking. FINALLY, he took a break, I opened a curtain, and Delaware Avenue had vanished in a whiteout.

Our consultant decided it was a must that Jacquie Walker and the new weather guy — I’d gotten here in August, 1984 — needed to get out there and go live at 6. As the storm roared, photographer Don Yearke drove Jacquie, our consultant, and me to the airport in blinding snow with drifts on the roads in a rear wheel drive van!

Sidebar: In Detroit, a much less snowy city, all of our vans and wagons had four-wheel drive. But here, management had the vision to buy rear wheel drive vans. Is there anything on wheels with worse traction? Duh. Yearke was driving aggressively, and I asked him “Aren’t you going a little too fast for this?” His response: “If I slow down, we’re DEAD.”

Buffalo in the '80s: When 'Grab a six-pack' became our mantra

The live shot went off well outside the terminal with an unbearable wind chill and spectacular blowing snow. We survived. That day, temps fell to the single digits and more than 15 inches fell at the airport.

As winds shifted to more westerly at night, the lake snow slipped into the Southern Tier for Sunday. But on Monday, winds backed to southwesterly and sprayed Western New York and the Niagara Frontier even more ferociously. The day dawned with a record low of -10 degrees, and as the morning unfolded the even-worse-than-Saturday conditions resulted in the first blizzard warning since 1977.

A retired National Weather Service staffer told me the Buffalo office was loathe to issue such a warning because of the large loss of life in 1977. They didn’t want to use that specific term from which real alarm would ensue.

But winds gusting over 50 mph and wind chills in the extreme range (-50s under the old wind chill index would be -30s today) forced their hand. There were both large scale, or synoptic and small, or mesoscale processes in this storm so that instead of the more common narrow band of lake snow, five counties were paralyzed by the Blizzard of 85. 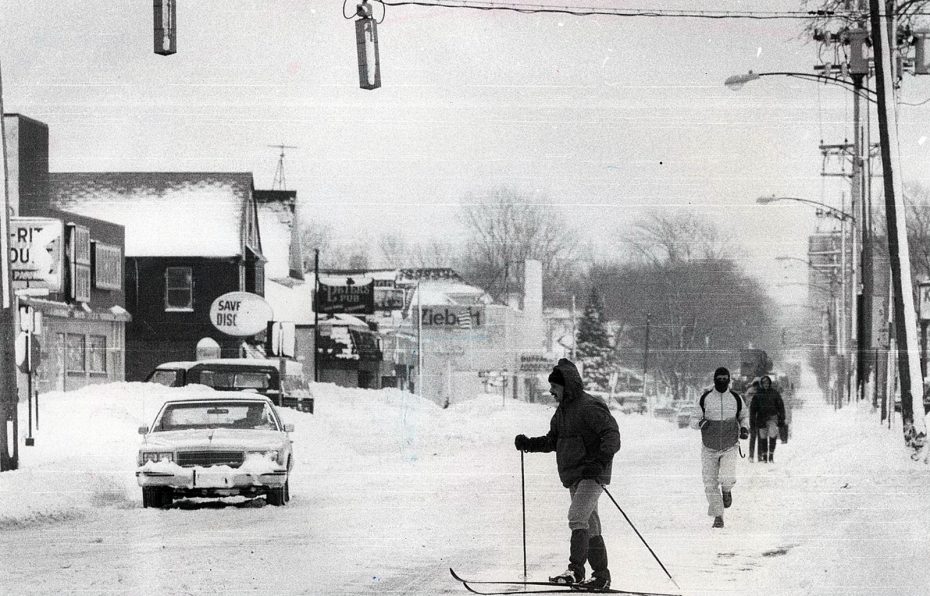 Skis were appropriate for the journey across the street of Kenmore and Engelwood avenues. (News file photo)

Buffalo had a travel ban for a week so plows could slowly dig out, and on Super Bowl Sunday, Mayor Jimmy Griffin uttered his famous comment to “Stay inside, grab a six-pack and watch a good football game,” to nudge people into staying off the roads. All in all, about 33 inches of wind-driven snow piled up.

An all-about-me aside: On that Blizzard Monday, WKBW weatherman Tom Jolls simply couldn’t make it to the city from his rural Southtowns home, a true rarity. My recollection is WKBW made Danny Nevearth keep interrupting the ABC Monday Night Movie.

Our consultant told me a focus group with dominant Channel 7 viewers a few weeks later indicated they got so annoyed with the constant interruptions (no fault of Danny’s), a lot of them switched to watch Bob Newhart and saw me for the first time. We were interrupting only on the half hour.

Their reaction, he said, was favorable about this new guy unknown to them until that night. The disruptive, roaring storm remains one of the most important forecasts of my career.

We won’t talk about the October Surprise, OK?

*Related: But if you wanted to read about the October Surprise, here are memories of those who lived through the storm.