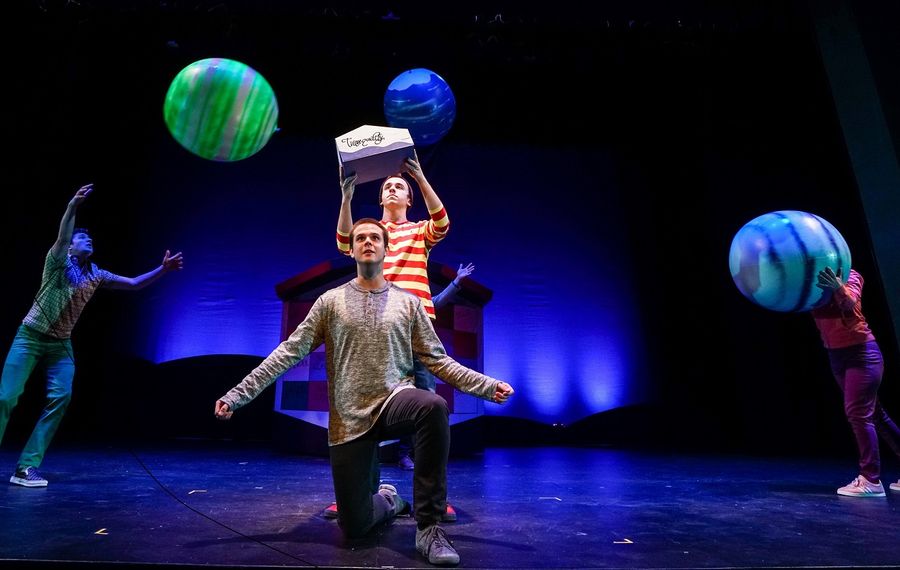 Mark Twain would never have written "Tom Sawyer" had he been living in present-day America, because there is no such thing as a boy with nothing to do but explore, search for treasure and have all kinds of dangerous adventures.

Today young Tom would be shuttling from swim practice to his soccer game after having his music lesson but before getting his homework done. His childhood would be so scheduled that he may, like 12-year-old Simon Ives in "The Boy on the Edge of Everything," wish that he could go to a place that had nothing there at all. Nothing to see, nothing to do, nowhere to go but into the quiet and calm company of one's thoughts.

And now through Feb. 4, Theater of Youth takes you there with Simon. "The Boy on the Edge of Everything" is this season's fun and insightful play for older children, with characters who may be just like them.

The story opens with Simon and his classmates, all so busy doing everything expected of them that they don't have time to find out who they are. Simon knows he's not happy, pointing out that the words "Home" and "work" shouldn't even go together, when he gets the lesson that opens up a universe of possibility for him.

In an otherwise boring science class, the teacher introduces the concept that the universe is still expanding right now, spreading into territory where there isn't anything yet. And if there isn't anything there, Simon muses, there must be a line, a border to the universe, an edge to everything. And on the other side, nothing. What a great place that must be!

And while Simon, played with perfect angst by Bobby MacDonell, dreams of this marvelous nothing, the play zooms us away to a house that actually is on the Edge of Everything, and the quirky boy (Dan Urtz) who lives there.

Urtz, most recently seen at TOY as Charlie Brown in the Christmas show, brings that same square-peg sensibility to his funny little alien, who has been watching the universe from its sideline since forever. But unlike Simon, he has had quite enough of nothing.

Obviously, these two guys simply have to get together, so playwright Finegan Kruckemeyer concocts a freak of family physics to deliver Simon across the cosmos to the Boy's house. But even then, it takes awhile for the boys to adjust to the idea that they have gotten exactly what they wished for.

Director Chris Kelly shows a deft touch for balancing the comic with his characters' search for clarity and comfort, and TOY's cast serves the story well. MacDonnell doesn't let Simon's anxiety overwhelm his likeability, and Urtz's Boy has a light touch with his pragmatic magic.

Nick Stevens gets to play both an insecure bully and Simon's loving but obtuse father, and draws laughs in both roles. Brendan Didio is cast as both Simon's younger brother and a classmate, and makes himself look close enough in age to his characters that he could be performing them from memory.

Amy Jakiel, the only woman in the cast, gets to be the mom, the teacher and, refreshingly, the tough tomboy girl in the class. In every role somehow keeps the young men in line.

The show is recommended for kids age 11 and older, and that means all the way up to parents who might see a little of themselves in the overbooked family, one where everyone talks and nobody listens. Their stress all comes to a head in one frustratingly funny scene in which Simon tries to explain the philosophical breakthrough he has achieved while Mom and Dad second guess him and decide he's either having girl problems, "night" problems, or wants to be an astronaut.

The 12-year-old boy who saw the show with me – a swimmer and soccer player who was in a science club and takes music lessons, but, unlike Simon, doesn't do them all at once -- enjoyed almost every minute of the show, smiling knowingly at the jokes and at the difficulties the characters were going through, and he was pretty sure his slightly younger siblings would like it, too.

"The Boy on the Edge of Everything"

Presented by Theatre of Youth at the Historic Allendale Theatre, 203 Allen St., through Feb. 4. For tickets, go to theatreofyouth.org.