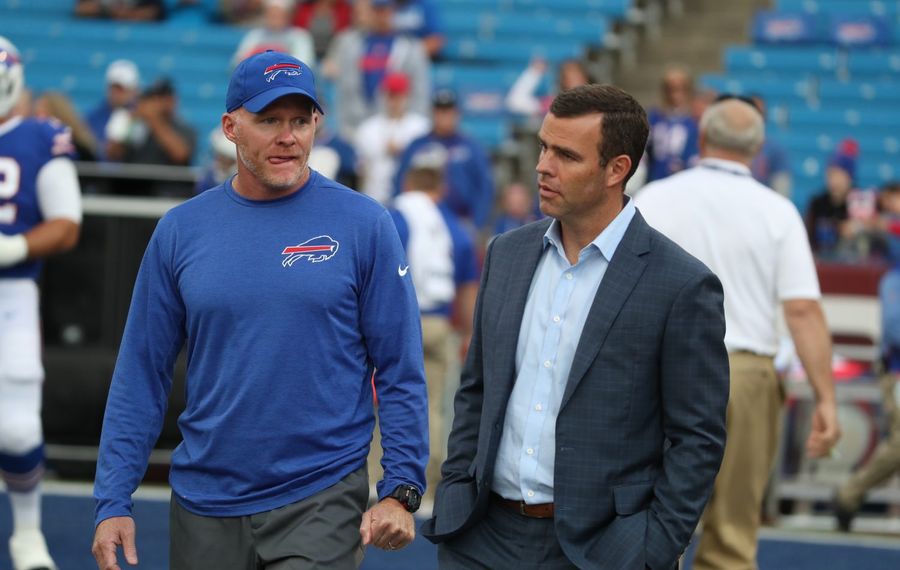 Buffalo Bills General Manager Brandon Beane met with reporters at the Senior Bowl Tuesday and was asked about the possibility of moving up in the draft for a quarterback.

Beane dropped some gems – did you know that to trade up into the top five, the Bills would have to really love the player? Or that for the Bills to trade for a pick, the team that owns it would have to make it available? Or that it's possible a team asks for more than the Bills want to give up? – but the most interesting thing he said was that the Bills are "still a ways away" from finalizing their rankings of the quarterbacks in the draft, which is why he hasn't had any conversations with other teams yet about a potential trade up.

"I'm not there yet," Beane said. "I think there's still too much to do. You got free agency and all that. There's a lot of questions that are unanswered on our own roster."

Speaking of evaluating quarterbacks: Since the Bills haven't finished evaluating the available QBs yet, that goes hand-in-hand with this news: Coach Sean McDermott was "noncommittal" Tuesday on Tyrod Taylor's future with team.

"I'm not going to get into Tyrod's future," McDermott said at the Senior Bowl. "Like I mentioned earlier, we're still going through our evaluation. Those decisions will come at some point down the road."

For new Bills OC Brian Daboll, a Buffalo native, returning home "means everything": Daboll also met with media at the Senior Bowl. He shared his thoughts on the City of Good Neighbors, McDermott's mandate to score more and his thoughts on play calling. Here's what he said about his offensive philosophy:

"You have to be multidimensional. You have to be able to throw it when they know you're going to throw it and you have to be able to run it when they know you're going to run it. That's the toughest thing in the National Football League, because each week, it's such a demanding amount of time in terms of preparation and going through the week and then getting to play a really good opponent. Regardless of who you play, every team in professional football is good. So at the end of the day, whether it's gap schemes, zone schemes, drop-back passes, play-action passes, you need to have all those things. And then each week, you go ahead and you evaluate the team you're playing and what you have, and try to put the best plan you can together to give yourself a chance."

Tuesday was also meat-market day at the Senior Bowl: Draft prospects got their measurements taken Tuesday. If you geek out over quarterback hand size, here you go. Josh Allen may be the quarterback for you.