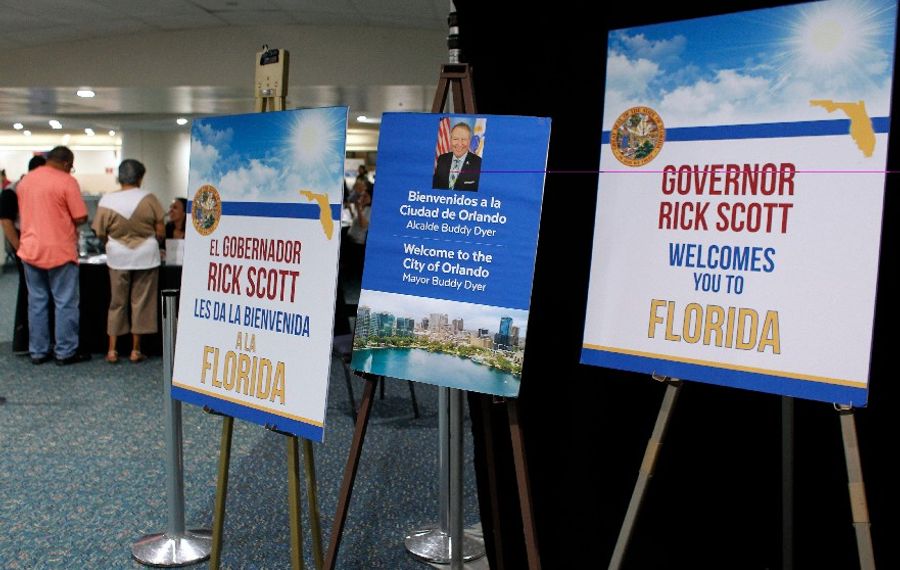 Ever since his 1992 book, “Earth in the Balance,” former Vice President Al Gore has been sounding the alarm about global warming and climate change that could lead to catastrophic flooding in coastal areas and “extreme weather events.” His 2006 Oscar-winning documentary, “An Inconvenient Truth,” went further, calling the environment, “really not a political issue, so much as a moral one.” “Inconvenient” put forth an impressive collection of data and portraits showing that:

With three “500-year storms” hitting Texas, Florida and Puerto Rico in just one month, Gore’s worst fears about climate change driving tragedy appear to have been right. But for all the devastating physical impacts of these hurricanes, there may be an overlooked political effect: A mass migration of predominantly Democratic Puerto Rican citizens to Florida could tilt the nation’s No. 1 battleground state away from the Republicans on a semi-permanent basis. Should this come to pass, Hurricane Maria will be an “external Black Swan event” that changed American history – and a vindication of Gore’s vision.

The basic theory on global warming is that human activity – such as heavy industry, heating and cooling offices and homes and transportation – uses enormous amounts of fossil fuels (oil, gas and coal). The resulting pollution pumps carbon emissions into the atmosphere and water.

The carbons have two effects: they raise the temperatures of the air and water and they form an artificial “greenhouse” that keeps heat from escaping. As Earth’s population grows and more fossil fuels are used, the more heat is generated and trapped. Hence, the term “global warming.”

A news release from NASA in early 2010 noted: “Except for a leveling off between the 1940s and 1970s, Earth’s surface temperatures have increased since 1880. The last decade has brought temperatures to the highest levels ever recorded, and the last year of the decade (2009) was tied for the second-warmest year in the modern record, a new NASA analysis of global surface temperature shows … we find that global warming is continuing unabated.”

Critics reply that, for literally centuries, Earth has gone through warming and cooling cycles long before the steam engine was invented. So, human activity may be little or no factor in the changing weather patterns. Also, a warmer climate may help certain regions like the Upper Midwest and Canada.

President George W. Bush said in 2001 that he opposed the Kyoto Protocol on reducing emissions because “it exempts 80 percent of the world, including major population centers such as China and India, from compliance, and would cause serious harm to the U.S. economy.” Bush added that he believed that efforts to abate the impact of global warming would be more effective than a huge effort to curb emissions.

Any decent high school science teacher will know that the surest way to speed up a chemical reaction is to heat it. The people living in the Caribbean Basin and the Gulf of Mexico area have just received a lethal demonstration of this scientific principle. For all of recorded history, trade winds from Africa have brought tropical storms and hurricanes to the South Atlantic. That is nothing new. What is new is that hotter water and air temperatures cause these storms to boil and speed up, thus making them more powerful.

Hurricanes Harvey, Irma and Maria were not the most deadly in U.S. history (the Galveston hurricane of 1901 caused over 6,000 deaths in America’s worst natural disaster, and over 1,200 died in 2005’s Katrina) due to better safety standards and emergency response systems. However, they were the costliest as estimates of their total damage are over $300 billion, roughly the gross domestic product of Denmark – or the state of Wisconsin. There were so many cars destroyed by these storms that auto stocks began a sharp rally soon afterward because nearly a million cars will have to be replaced in the South. So many homes were damaged that homebuilders are putting pressure on the Trump administration not to deport any immigrants because they will need more construction workers.

So much for the obvious physical and economic damage. Now for the possible political effects. Since Ronald Reagan’s retirement in 1989, the nation’s three most populous states have gone in starkly different directions. California went in a more liberal direction (the “Left Coast”), Texas more conservative and Florida became the ultimate battleground.

A brief political history of Florida is in order. As a state that seceded during the Civil War, Florida was part of the “Solid Democratic South” that voted for almost every Democrat from Grover Cleveland in the 1880s to Franklin Roosevelt four times in a row. But with the advent of air conditioning and jet travel, the Sunshine State began to change rapidly after 1945. The new urban areas of Florida (Miami, Tampa-St. Petersburg, Orlando) were filling up with new middle-class migrants and retirees who brought their Republican voting habits with them. Dwight Eisenhower in the 1950s became the first Republican nominee to win Florida twice. Since then, wealthy American transplants have helped key Republican victories there.

Then in the early 1960s, the Castro Revolution in Cuba brought in roughly 1 million fiercely anti-Communist refugees who also added to Republican strength. By 1968, with the defection of white (Southern) Democrats in the Panhandle area, Florida became a Republican stronghold like most of the South. (Older white retirees from the Midwest continue to flock to the Gulf Coast, also boosting Republican prospects). From 1968 to 1988, Democrats carried the Sunshine State just once with native Southerner Jimmy Carter in 1976, though moderate Democrats continued to do well at the local level.

But beginning in 1992, Florida changed dramatically once again. A huge influx of more working-class retirees from the Northeast (especially older Jewish voters) began to make the state much more competitive. President George H.W. Bush’s margin here dropped from 22 points in 1988 to just 2 in 1992. In the seven national elections since 1990, Democrats won three narrow victories (President Bill Clinton in 1996, President Barack Obama in 2008 and 2012). Republicans won three hard-fought victories (Bush 41 in 1992, Bush 43 in 2004 and President Trump in 2016) and the 2000 election was so close that it was only resolved after a furious 36-day recount that ended with the Supreme Court awarding the state’s decisive electoral votes to Bush by the tiny margin of 537 votes out of nearly 6 million. In those seven elections since 1990, both parties have averaged 48 percent of the total Florida vote. Talk about too close to call! With a Democratic Northeast and West Coast balanced off by a Republican Midwest and South, all this means that the likely word for someone who wins Florida is “president.”

Into this intensely close partisan standoff are coming Puerto Rican migrants by the thousands. Ever since Puerto Rico became an American possession in 1898, Florida has had a small Puerto Rican population due to its proximity to the island. But they have been dwarfed and overshadowed by the Cuban-American community. In the 1990 Census, Cubans were nearly 40 percent of Miami, while Puerto Ricans were a mere 3 percent.

But since then, problems on the island caused a steady migration of Puerto Ricans: in the 2010 census, the Puerto Rican share of Florida’s population had more than doubled to almost 5 percent. Since earnings are roughly 30 percent higher for Puerto Ricans in Florida than on the island (and poverty rates twice as low), perhaps this migration was to be expected. As a special report by the City University of New York noted: “All in all, employment opportunities and higher earnings seem to be the main characteristics of the growing Puerto Rican population in Florida.” The census estimated in 2014 that the Puerto Rican population in Florida had passed 1 million for the first time – only a few percentage points below Cuban-Americans. And that was before Hurricane Maria hit.

Maria devastated the island, leaving over half the people without electricity for months. Jenniffer Gonzalez Colon, Puerto Rico’s delegate to the House of Representatives, commented on the aftermath: “Puerto Rico’s main source of income is not tourism, it’s manufacturing – pharmaceuticals, medical devices, electronics, computers. That means when you have zero revenue because of no power on the island, the already weakened economy is going to get worse.”

With no power or jobs, no wonder Puerto Ricans are moving to Florida in droves. University of Houston political science professor Richard Murray estimates that the current exodus off the island will bring 1 million new Puerto Ricans to the Sunshine State by 2020.

Not all of them will vote, but those who do are likely to be Democrats: a special exit poll by Latino Decisions found that 72 percent of Florida Puerto Ricans voted for Hillary Clinton over Trump.

Nor is that partisan split likely to change. There was a widespread perception on the island that the Trump administration was more responsive to Hurricane victims in Texas and Florida.
Since Puerto Ricans are already American citizens, they are immediately eligible to vote. They appear to be skipping Miami (where Cubans predominate) and concentrating in the Orlando area where service jobs, especially in the tourism and health care sectors, are widely available. If a million Puerto Ricans move to Florida by 2020, that would mean about 400,000 new Puerto Rican voters. A repeat of Hillary’s 3-to-1 margin from 2016 would add a net 200,000 votes to the Democratic ticket – in a state Trump won by less than 120,000.

For decades, Gore has warned that the environmental fallout from global warming could be catastrophic. Now, the political fallout is likely to be dramatic as well. On HBO, Bill Maher recently joked to Gore that with rising sea levels due to global warming, “we could lose Florida, and who knows more about losing Florida than you?” Gore bristled, complaining about an inaccurate recount in 2000. But if the hurricane-induced migration from Puerto Rico turns Florida into a Democratic state, the former vice president may get the last laugh.

Patrick Reddy is a Democratic political consultant from California and author of the forthcoming “21st Century America.”