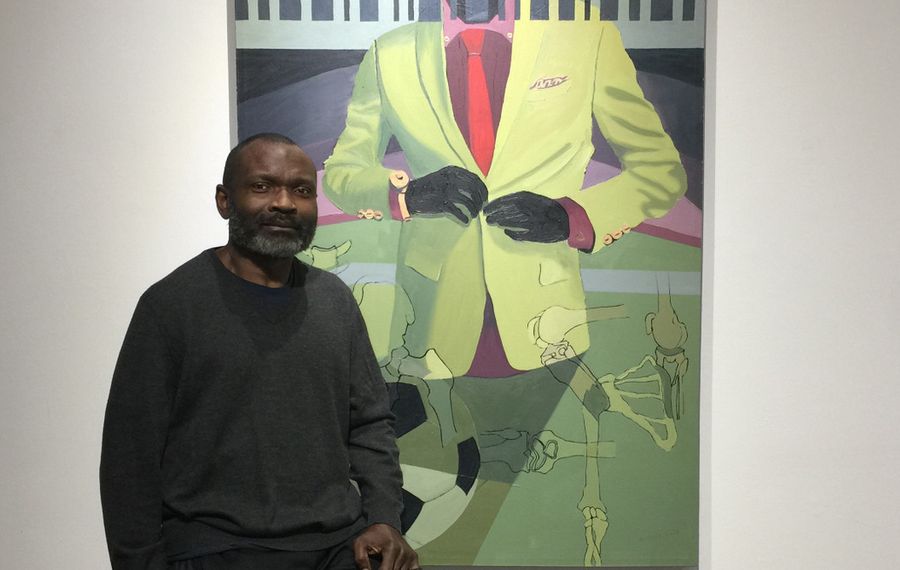 Each painting by the Ghanaian artist George Afedzi Hughes, an associate professor of painting at the University at Buffalo, is a series of worlds within worlds.

His canvases from the early 2000s, now spread across the walls of Buffalo Arts Studio, contain bloody patchworks of inscrutable terrors: Human skulls and cubist faces share space with canine heads, pasted photographs or news clippings. A British redcoat with a severed head anchors one canvas, that is  scrawled with vague words and phrases hinting at the continued hold of colonialism over African lives and traditions.

By contrast, the artist's more recent work, also on view in the Buffalo Arts Studio show "George Hughes: The Politics of Identity," feel about 100 degrees cooler. They feature graphic portrayals of Ghanaian soccer players, accented by imagery of human anatomy, African geography and references to the excessive wealth those players amass.

For Hughes, the transition from a bloody colors and severed heads to cooler tones and seemingly more polite symbols comes from the subject: not the bloodshed of colonialism, but its more subtle effects.

"When I paint, sometimes I want the paint itself to emulate the theme that I'm trying to render, or the content," Hughes said. "So the explosive paintings usually deal with violence. The recent ones are more calculated, because wealthy people don't just become wealthy by accident. Everything is calculated."

Soccer seemed a natural subject for Hughes, who grew up like many in Ghana obsessed with the sport.

"We all played soccer," he said. "In the afternoon and after school, we would literally go out and find teams to play with. And our parents did not monitor our play time the way it's done in the states." 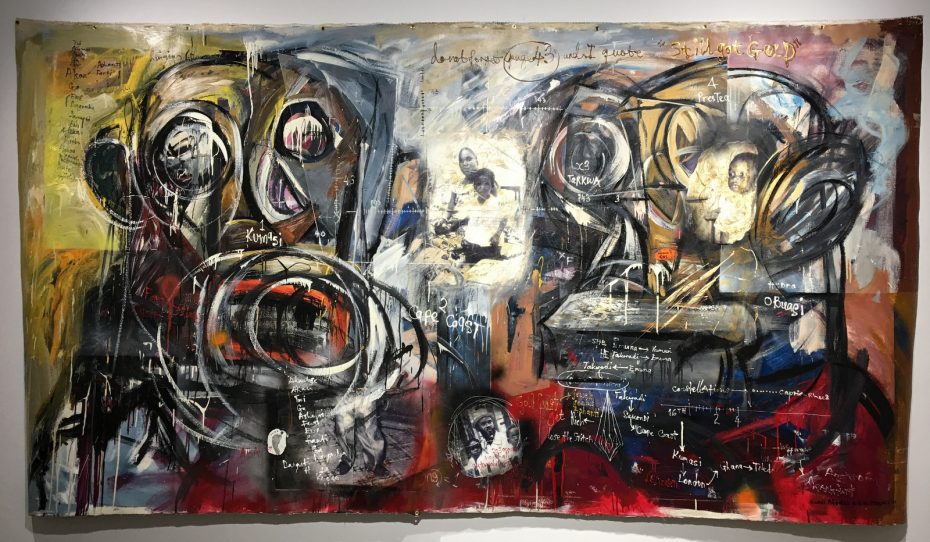 A 2001 painting by George Afedzi Hughes hangs in the Buffalo Arts Studio gallery through March 3.

Hughes' childhood interest in soccer continues today, but his concerns about it have changed. His paintings, if obliquely, explore the way Ghanaian players are recruited and paid by the lucrative European leagues. But when those players return to play for their home country in the World Cup, Hughes notes, they rarely perform as well because of poorly organized teams with fewer resources than their European rivals.

His paintings, in some way, are an attempt to capture and comment on this dichotomy.

"Over the years I've realized that, especially in developing countries, the attitude toward soccer somehow reflects the way they govern," Hughes said. "I also see soccer as the way generals who plan a battle, the coaches who plan a football game, there are certain tactics that they use. If you have a great team, and you have bad coach, it's hard to win."

Some of Hughes' paintings also more directly comment on racism in the soccer world, especially one uncharacteristically straightforward piece featuring a soccer ball sitting on a green field next to a half-peeled banana.

"There are times when the black players are kicking the ball, and someone will throw banana onto the field," he said. "So race issues, like being taunted by the spectators, also feature in my work."