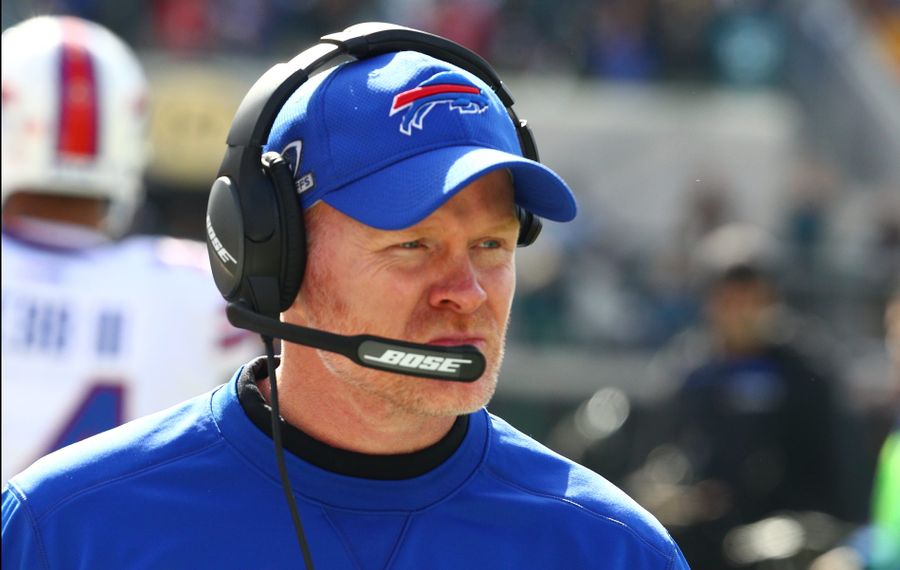 MOBILE, Ala. — Sean McDermott was noncommittal Tuesday about Tyrod Taylor's future as quarterback of the Buffalo Bills.

"I'm not going to get into Tyrod's future," the coach told reporters between practices for Saturday's Senior Bowl college all-star game. "Like I mentioned earlier, we're still going through our evaluation. Those decisions will come at some point down the road."

McDermott also wouldn't commit to possibly making more changes to his coaching staff beyond replacing offensive coordinator Rick Dennison with Brian Daboll. There has been speculation that the Bills could make a switch with their quarterbacks coach, a position David Culley filled last season.

"At this point, it's really still early," McDermott said. "We'll see going forward. We're still going through our evaluations, (General Manager) Brandon (Beane) and myself. So I know we've got a number of good coaches on our staff. It was fun to be around those guys this season and learn from them and grow together."

However, McDermott did give a basic mandate to his new coordinator.

The Bills ranked 22nd in the NFL in points during the 2017 season. They were 29th in total yards and 31st in passing.

Asked if it was fair to say the Bills need more production out of the quarterback position, McDermott hardly delivered a ringing endorsement for Taylor.

"I thought the quarterback position, in particular Tyrod and then Nate (Peterman), did some good things," the coach said. "I've mentioned before the work ethic, the intangibles that Tyrod brings to the table are very much appreciated and a big part of how we did things this year and what we were able to do. I thought he did some good things. Overall, we'll continue to evaluate where we are and what's right for this organization moving forward."

Although McDermott wouldn't discuss the type of scheming the Bills' offense would do under Daboll, he said he was attracted to the winning pedigree he developed as an assistant coach in two stints with Bill Belichick of the New England Patriots and in his previous position as offensive coordinator for Nick Saban's national-championship University of Alabama team.

"I've known Brian for a number of years," said McDermott, who first met Daboll when McDermott was a player at William & Mary and Daboll was a restricted salary coach there. "He's been around winning, both at the NFL level and at the college level. And when you look at his history, he's known as a quality teacher, a bright offensive mind. And when you look at what he's done over the years, coaching different positions, been a coordinator before, so he really embraces that growth mindset that we look for.

On the shoulder surgery that wide receiver Zay Jones recently underwent: "He did have the surgery. It was something that came up in the exit physical. All signs are good at this point. We look forward to getting Zay Jones back and a healthy Zay Jones."

On the future of veteran defensive tackle Kyle Williams: "I've spoken highly of Kyle and I'll continue to speak highly of Kyle. He's done a lot for this organization. He's a great person and great family man. Those, like the other decisions, will come at some point down the road here. I continue to evaluate our situation."

On what he looks for when meeting with quarterback draft prospects: "You go from A to Z and you start with just the person and try to get to know their DNA a little bit more. When you look them in the eye, how they handle questions. In a lot of ways, it's no different than some of the other positions we'll talk to. Obviously, the importance of that position and what it means to scoring points and being successful as an offense. I understand that part of it. But that's part of the process that I enjoy, getting to know these young men besides what's on the field. That's part of this process and part of what we'll do at the combine, as well."

Spotlight is on QBs for Senior Bowl week