The Frizlen Group and Yots' Common Bond Real Estate will formally open the new 34-unit historic rehabilitation project at 170 Florida St. later this week, after more than a year of construction work from November 2016 through the end of last year.

The $6.5 million project includes a mix of one- and two-bedroom apartments, along with 2,000 square feet of office space for Preservation Studios, a historic preservation consulting firm owned and run by Yots and his partners, Derek King and Mike Puma.

Rents range from $900 to $1,450 initially, and the developers said that "leasing has been steady" since November, when it began, with 12 of the units already leased, and the rest expected by May 1. "We weren't sure what to expect with the onset of winter and the holidays, but we've been pleasantly surprised by the initial interest in the units," Yots said. 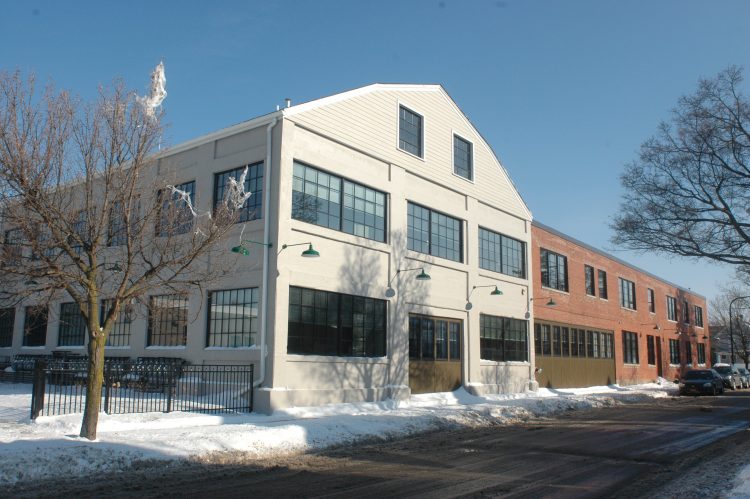 “Construction went very smoothly ... and we delivered the project on time and on budget, for the most part,” Frizlen said.

Under the project, the development team – which also includes Frizlen as architect and general contractor BRD Construction – renovated the two-story former George A. Otis Bed Manufacturing Co. building, which was constructed in 1911. The project was financed with a $500,000 Better Buffalo Fund loan, plus historic tax credits purchased by Berkshire Bank.

That's when a predecessor of Otis, the N.P. Chaney Co., began building the concrete portion of the facility, as the company grew to become one of the largest mattress makers in the U.S. The brick and tile buildings were added between 1923 and 1925, along with other additions and outbuildings over several decades. The building was used to make plastic products during World War II, and was later used by other manufacturers before it was sold.

The 46,000-square-foot building and secondary buildings sit on 1.5 acres extending to Jefferson Avenue.

"This project is very important for the East Side of Buffalo and its transformation into a walkable neighborhood," Frizlen said.

The new apartment building - which will be managed by Frizlen's son, Jason - is close to Canisius College but also to the Metro Rail station at Delavan, making it convenient for University at Buffalo's South Campus, as well as the Buffalo Niagara Medical Campus and downtown Buffalo, the developers have noted.

Frizlen and Yots are also starting a new project on the West Side, with the $6 million conversion of the former New York Central Freight House at 68 Tonawanda St. into apartments and commercial space. Work by BRD is expected to begin by mid-2018, with completion within 12 months.