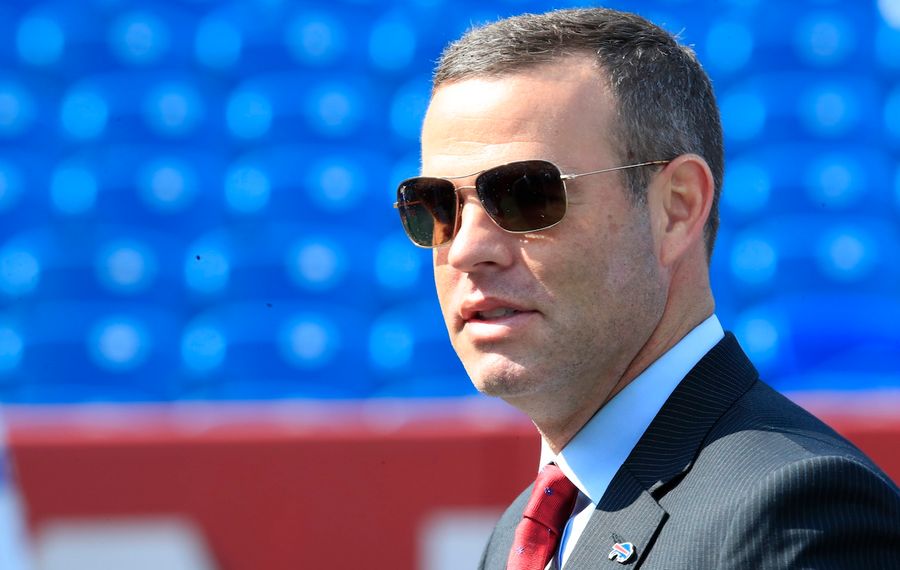 MOBILE, Ala. – The Bills are going to let their evaluations of the 2018 draft class – not their obvious need – dictate whether they try to move up in the first round to pick a quarterback.

They won't make a trade that does not make sense – meaning a deal that smacks of desperation.

They have a long way to go in the evaluation process before they even think about whether they should move up.

Bills General Manager Brandon Beane made those general statements – in so many words — after Tuesday's practice sessions at the Senior Bowl.

Bills fans have 12 weeks to chew on the Bills' quarterback debate leading up the NFL Draft on April 26. It's the obsessive question facing the Bills because they do not have a franchise QB and they have two first-round picks (Nos. 21 and 22) to use as possible trade-up leverage.

Beane shared some of his big-picture draft philosophy at Ladd-Peebles Stadium. He said any player must merit a high draft grade, regardless of need, before he would even think about trading up.

"We've got to do a good job with all positions of putting a value on where they belong," Beane said. "If you put a quarterback, a guy at the top you think he's a top-five guy, that's one you'd make a move for. But that's any position. That comes with a hefty price to be able to do that from 21 or 22, where we're at. So we're not saying we would do that. To go up there, we'd have to really feel good about it."

Beane acknowledged it might be very difficult for the Bills to move way up. The top two teams in the draft, Cleveland and the New York Giants, both need quarterbacks. Denver at No. 5 and the New York Jets at No. 6 also need QBs. Of course, one or more of those teams could fill their need through free agency.

"At the end of the day, anything that's for sale, it's only for sale if somebody is willing to move it," Beane said. "I know there's going to be all these hypotheticals. This is how the Bills could do this; this is what it would take. But you have to have a partner if we decided it was worth it . . . to move up there."

"Even if you want to move to two or three or four or five whatever number it is, they have to be willing to do it," Beane said. "And they may ask for a king's ransom that does not make sense for us. Again, we have to have a partner if we were ever choosing to move up or move down. Who knows what will happen? We're still a long way from doing that because we haven't put a final value on each of these players."

A big part of the evaluation process is the meetings that teams conduct with the draft prospects. Beane said he likes the quarterback depth in the 2018 draft but stressed that is a preliminary opinion.

"It looks pretty good," Beane said. "I've yet to get to meet any of these guys. We're just starting that process. A lot of these guys have a lot of physical tools, but there's guys every year that have physical tools that when you get down to March and April you go: 'Ahh – I don't know. I'm not sure.'

"I'll have a much better idea once we get through the combine, the pro days and then visiting with them, even bringing them in for a visit," Beane said.

Asked what he needs to see to buy into a QB prospect, Beane said: "The quarterback is such a layered piece. Obviously, you have to have all the physical tools. You guys have heard me talk about making plays from the pocket and things like that. But you've got all the intangibles, the leadership. Do they make guys around them better? What's their command? Have they taken snaps from center?"

Beane said he and his scouts have a lot of work to do before making their draft board.

"It's a quarterback league, let's be honest," he said. "You have to make sure you're comfortable. That's why you have to do the due diligence in the fall. This is the next step, the Senior Bowl. The next step's the combine, then pro day. We have to do everything before we put a value on these guys. If you put a value up here – that means you feel comfortable going up there to get them whatever position it is. We're still a ways away from doing that."

Beane said he has not had even casual conversations with any other general managers about possible draft-pick trades.

"I'm not there yet," he said. "I think there's still too much to do. You got free agency and all that. There's a lot of questions that are unanswered on our own roster."