Defending state Division I champion Williamsville North obviously knows what it feels like to be truly No. 1.

That's why being ranked first in the state in January means little to the Spartans and longtime coach Bob Rosen, who has guided the program to five state championships since its inception in 1990. There are still plenty of games on the docket, including those ever-so-meaningful-postseason ones next month.

"That ranking means nothing," Rosen said. "That's just a fictitious thing. … It's winning your last game that matters.

"Years ago it meant something maybe when we first started getting ranked but winning the last game and continually getting better throughout the year is important."

The unbeaten Spartans took steps in that direction earlier this month, rallying for a 3-2 win over past nemesis Niagara Wheatfield and also getting the better of reigning state Catholic champion and longtime rival (dating back to the league's Original Eight days) St. Joe's.

North has 11 returnees from last season on its 23-player roster. That includes seniors Brett Sardina and Andrew Bruno, who rank Nos. 1 and 2 in scoring in the entire Fed. Sardina also leads the league in goals. Senior defenseman Griffin Green logs a lot of minutes night in and night out. Matt Bielinski and Anthony Trigilio also are returning big-game players. Riley Moyer has successfully adjusted from backup to starting goaltender for the Spartans, leads the league in minutes played and has a 2.28 goals-against average.

Dan Mancuso is back as an assistant coach with the Spartans after a five-year hiatus to focus on coaching his sons' teams.

Of course there is not a shortage of teams looking to knock North off its perch.

"It's been an up-and-down kind of season," Lancaster coach Kevin Miller said. "We were able to knock off some good teams early on and had some humbling losses. The boys are growing. Hopefully we fix a few mistakes we made earlier and move forward toward the end of the season."

Ryan Voight and Riley Dirschberger are the scoring leaders for the Legends. Alternate captains Zach Foley and Jacob Jackson anchor the defense, while Dean Hahn and Kevin King have provided solid goaltending.

Niagara Wheatfield already battled North to a tie once this season and had a 2-1 lead in the third period of the teams' second meeting won in comeback fashion by the Spartans.  Key players for a program that has won five Section VI titles since joining the Fed in 2008 include Chace Woods, Nick Peters, Nick Breier and Christopher Tobey. Mike LoTempio has played well up front. Peyton Siegmann and Dylan Woods have pretty much split the goaltending duties.

"We're chasing North but there are a lot of teams we can't discount," said NW coach Rick Wrazin.

The line between winning and losing in this sport can be thisclose.

Take Clarence for example. The Red Devils, building off a 12-7-1 campaign, have just two wins and three ties to show for it this year. But a goal or here and there and either the ties or two one-goal defeats could potentially be victories.

"Goaltending has been strong and very often kept the game close," coach Richard Brooks said. "The team struggles to produce offense and to convert opportunities to goals." 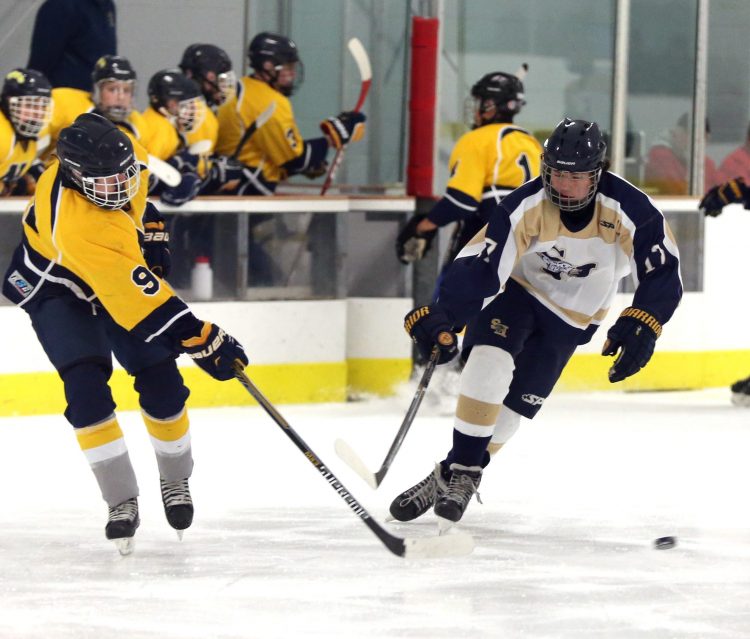 Tyler Edholm (right) and the Sweet Home Panthers are No. 1 in the state for the first time in program history. (James P. McCoy/ Buffalo News)

While Williamsville North doesn't really care about being ranked first in the state at this point, the opposite can be said for Sweet Home (10-1-1) – which climbed to No. 1 for the first time in program history last week in the New York Sportswriters' poll.

"It's been a pretty good feeling," longtime Panthers coach Dave Gerspach said. "I have six kids who've been with us for four years. Those kids are our main leaders. They've grown from OK hockey players to really good hockey players."

One of those players is Tyler Edholm, who's tied for second in the league in scoring and just became the fifth Sweet Home player to reach 100 career points. Others who have had a hand in the team's success includes alternate captain Joe Torrillo and Alex Farkas up front, and on the blue line senior captain Andrew Czyz, Danny Lund and Patrick Derisley. Mike Lisman has been solid between the pipes.

Younger players who have helped filled pieces for the Panthers include Kyle Neudorf and Blake Russo.

While Sweet Home is off to a sensational start, the schedule  gets a little more daunting. The Panthers still have a nonleaguer against Division I Bishop Timon-St. Jude, a tournament in Lake Placid and also face the one team they lost to, St. Francis. Sweet Home last won a sectional title 10 years ago and hasn't made it to the Division II final since 2010.

While Sweet Home is off to one of its best starts ever, the West Seneca schools in the higher small-schools division are showing signs that they could be tough outs in the postseason. That includes defending section champion West Seneca East, which won it all as a No. 7 seed last year. The Trojans were off to an unbeaten start until rival West Seneca West handed them the first of two losses last week.

East coach Phil Prynn's reaction to the first loss – a 4-2 defeat to West: "It's kind of like a little humble pie. … But it doesn't hurt to lose a game during the regular season and maybe it'll serve us well.

"Our goal is to win the finals again. That is what we expect of ourselves. … Our goal is not to go undefeated during the regular season."

The Trojans have 13 returnees looking to make that happen, including goalie Jagger Maving, who has a 1.67 GAA and three shutouts. He strung together a run of nine periods of shutout hockey, broken in the second period of last week's loss to West. East also has the top two scorers in Division II in Tyler Arndt and Danny Flynn. Danny's twin brother Damond Flynn helps anchor the defense, while Drew Werner is a nice two-way forward who plays physical, according to Prynn.

Meanwhile, West Seneca West also among the gauntlet of contenders within its division. The Indians rank third in their division in total goals and have spread the wealth.

Jacob Fort leads the Indians in point,s followed by Tyler Dunning. Matt Myers ranks fourth on the team in points. 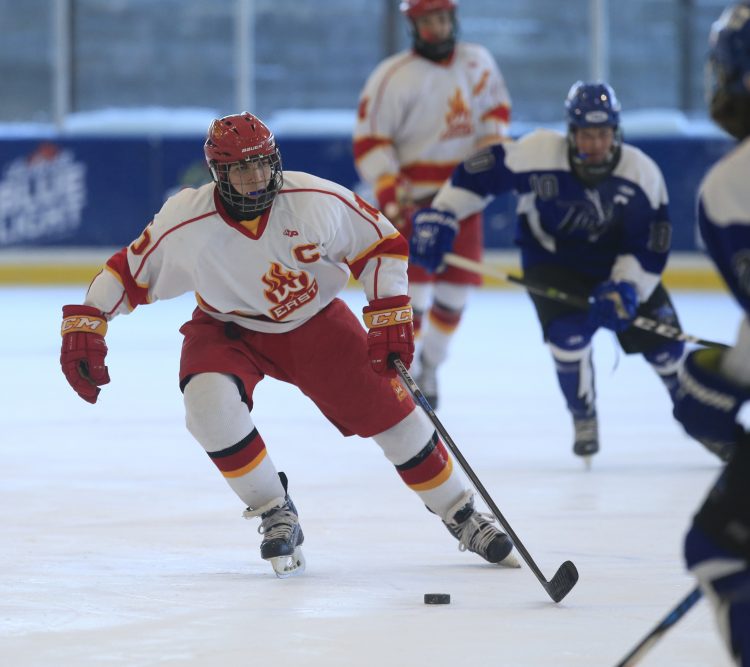 When the Division II coaches say navigating through the small-schools regular season and postseason is a gauntlet, it's not coach-speak.

West Seneca East and sectional runner-up Kenmore West proved that last season as lower seeds that played for the crown – ending a run in which either Williamsville East or Kenmore East or both had made the finals six straight years.

Those who look to thwart West Seneca East's bid for a repeat include the aforementioned Flames of Williamsville East. They won the Hilton Tournament and returnees include Sean McLeay, Ryan Mitchell, Ryan Chambers and Sam Pastore.

Kenmore East, which went through a rebuilding year last season after winning the state title in 2016, is hovering near .500 but has won two of its last three games – including a comeback 6-5 win over West Seneca West on Sunday. The Bulldogs also have beaten Williamsville East in that stretch. Freshman Dominic Cassillo leads East in goals and points, while Russ Riggio returns as captain. He led the team in scoring last year and ranks a point behind Cassillo for the Bulldogs' scoring lead.

One of the teams West Seneca East beat on the way to the championship-- Grand Island --  is definitely in the mix this year.

The Vikings hold a share of first place with the Trojans. Parker Morrow, Dylan Russo, Thomas Cecere and Nicholas Phinney lead the Grand Island offense. Jason Lupp is one of the top goalies in the league, ranking first in goals-against average (1.40) and third in minutes played.

"We've just improved our depth this year," GI coach Don Pray said. "We have two lines that can score and two checking lines and of course the play of Jason Lupp. He's first-team All-Fed last year and he's playing up to his usual standards but the league is so tight."

Kennmore West scored a huge 3-2 overtime win over Williamsville East on Monday night and is just three points behind the co-leaders in its respective division (GI and West Seneca East). Ethan Yotter's 20 points lead the Blue Devils, who also have received solid contributions from Michael Barker, Cameron Crosier and Owen Green. Green has a hard shot from the point, which helps fuel the Devils' power play. Of those players, only Crosier is new to the team. Among the other returnees for West are seniors Tim Seyfang, Matt Stewart, Keenan Kasperek, and Glenn Wirth.

A familiar face is back behind the bench at Amherst for the first time in several years. Mark Mobus guided the Tigers to their only Section VI title back in 2010. Amherst has won more games than in its previous two seasons combined with senior defenseman Nick Smith and juniors Andrew Johnson and Alex Braden leading the charge.