Buffalo bade farewell to the late Robert G. Wilmers on Monday, in a tribute filled with memories – but also calls to carry on his influential work in the community.

The M&T Bank chairman and chief executive officer died at age 83 in December, and a funeral service was held in New York City.

Monday's tribute allowed friends, colleagues and admirers to reflect on his wide-reaching impact in Buffalo, through his leadership of the bank but also his philanthropy and commitment to education.

"Bob never really considered the job done," said Rene Jones, who succeeded Wilmers as M&T chairman and CEO. "There was always more to do."

"Let's all of us who experienced Bob's love and generosity, his care and concern, let's keep working on what he left unfinished," Jones said.

Robert T. Brady, an M&T board member, said there was a theme that ran through the initiatives Wilmers and M&T supported. "The theme was this: successful businesses have an obligation to support the communities in which they, their employees and customers reside," Brady said.

When Brady was chief executive officer at Moog Inc., he was inspired by Wilmers' dedication to education, when Brady and Moog provided support to the Charter School for Applied Technologies.

"Here's my thought: if each of us were to leave this gathering with the intention to be a little more like Bob, a little more thoughtful, a little more inquisitive, considerate of others and determined to make the community around us better for everyone else, then I think that would be a fitting tribute to this extraordinary man," Brady said.

Brady, like other speakers, noted how Wilmers went about his business in a low-key manner. "Bob was an icon in the banking industry and he never acted like one," he said. 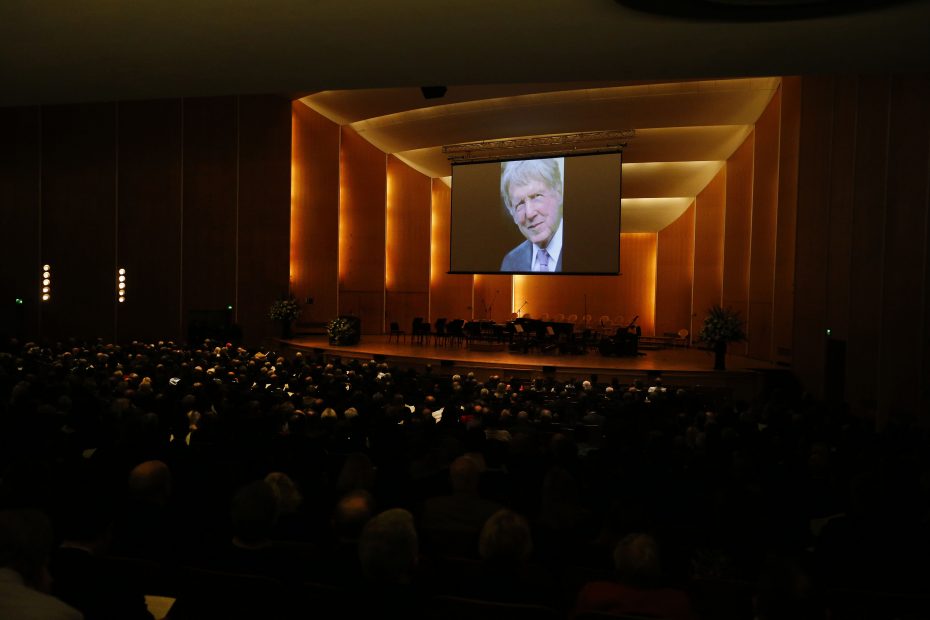 People pack Kleinhans for the celebration of the life of Robert Wilmers. (Mark Mulville/Buffalo News)

Buffalo Mayor Byron W. Brown met regularly with Wilmers after taking office, and considered him "a mentor, confidant and friend." He said Wilmers was supportive of diversity, and stepped in to ensure an African-American businesswoman obtained a loan from M&T to buy a radio station, after getting turned down by other banks.

Wilmers' son, Christopher Wilmers, said his father's "love affair" with Buffalo began when he and other investors started buying up stock in M&T. He would tell his son the events that led to him being named CEO of M&T were "totally fortuitous."

"He got lucky, and so would Buffalo," Christopher Wilmers said.

Wilmers was from New York City. But whenever someone he met asked him where he was from, "he wouldn't hesitate," Christopher Wilmers said.

" 'Buffalo,' he would say, with a big, proud smile on his face. For it was here that he made his biggest dent in the world, and of those accomplishments, except maybe family, for which he was the proudest," he said.

Bishop Richard Malone of the Catholic Diocese of Buffalo said Wilmers has ingrained his spirit of generosity in M&T's organization. "Western New York, we all know, is a far, far better place because of his presence, his leadership, his benevolence, his example," he said.

Along with the spoken tributes during the one hour and 45 minute event were performances by Buffalo Philharmonic Orchestra musicians and the Westminster Presbyterian Church Choir. Wilmers was known for his support of arts and culture.

"For decades, Bob worked to ensure the health and survival of our orchestra," said JoAnn Falletta, the BPO's music director. "Sometimes tough love was required to keep us in line. But he never gave up."

"I can say without a doubt, that if we had not had Bob's love and dedication, our Buffalo Philharmonic would not be here at Kleinhans," she said. "This beautiful hall would be dark and silent."

Amid the serious reflections about Wilmers were touches of humor. The mayor dodged challenges from Wilmers to play squash. Seemingly everyone had the experience of being invited to lunch with Wilmers and answering his countless probing questions.

Jones, a longtime M&T executive, recalled the phone calls he got at home at nights and on weekends from Wilmers. Sometimes his wife and daughters would answer the phone first and talk to Wilmers.

"I can hear my youngest now: 'Hey, dad. It's your work friend.' That's the way Bob was," Jones said.