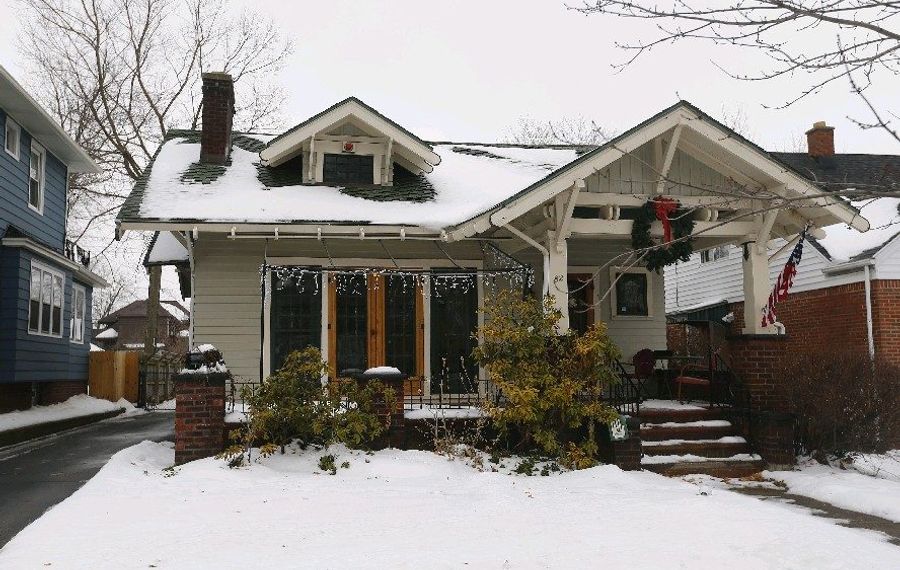 Paul McDonnell practices what he professes: conservation and protection of historic structures.

Not only has McDonnell served as chairman of Buffalo’s Preservation Board for the past six years, he also is founder and president of the Campaign for Greater Buffalo History, Architecture and Culture and gives architectural tours during the summer aboard the organization's “Open Air Autobus.”

But recently, he ratcheted up his efforts even more: He petitioned the Preservation Board to designate his craftsman bungalow home a local landmark.

“My thinking is we’re all stewards of our houses, and I really want to make sure that when I’m gone the historic fabric of the home is kept for future generations,” said McDonnell, who has owned the home since 1996.

Board members approved McDonnell’s request this month. They agreed that the single-family home met three criteria to be listed as a local landmark. For one, the building is a contributing structure to the University Park Historic District. Also, the design of the house is a "fine and accurate" example of the craftsman style. And thirdly, the dwelling is architecturally significant.

The house, at 82 Allenhurst Road, sits within the Historic District, which was added to the National Register of Historic Places in 2011, said McDonnell.

Developed by Anthony Huck in 1913, the University Park Historic District is a slice of the city’s University Heights neighborhood. The triangular-shaped University Park community is in the northeast corner of Buffalo on portions of Larchmont Avenue, Niagara Falls Boulevard, Radcliffe Road, University Avenue, Allenhurst Road, Pelham Drive and Capen Boulevard between Main Street and Kenmore Avenue.

McDonnell’s craftsman bungalow is one of the neighborhood’s 252 homes. The original owner appears to be Edward Hoehn, a confectioner with a business address at nearby 3504 Main St., according to the 1929 City of Buffalo directory. Constructed in 1921, the residence is an example of the craftsman style prevalent in the United States from 1900 to 1930, according to paperwork McDonnell filed with the Preservation Board. The style lent itself well to the prefabricated homes with components that were simple, could be mass produced and transported by railroad to the building site. Thousands were sold by retailers such as Sears & Roebuck and the Aladdin Co.

McDonnell's house has maintained most of the historic details that define the style, including a broad, low-sloped roof with wide, unenclosed eaves projecting well beyond the edge of the house, McDonnell said.

It also has original wood clapboard and siding, he said.

None of the other nine members of the Preservation Board has petitioned to have their homes designated a local landmark, McDonnell said. However, a majority of them live or work in national or local historic districts.

In other business, the Preservation Board has a new member. Joel Moore, a member of the Law Department for the Buffalo Board of Education, was appointed recently by Mayor Byron W. Brown to fill a vacant seat.