While other classmates at Frontier Central High School were considering applying to colleges, 17-year-old Karen A. Schultz Chapman was thinking about the military.

"I knew I wanted to get out of Buffalo and see the world," Schultz Chapman said of what motivated her to meet with military recruiters in her senior year back in 1985.

At home in Hamburg, her parents were divided on her plans to enter the military.

She took her mother's advice and signed up for the Air Force.

"My father had served in the Army Reserves and I told him the Air Force was not like that. It's a different way of life. I'm not going to be out on a ship or out in the field," Schultz Chapman said of how she succeeded in getting him to sign the enlistment papers that her mother needed no convincing to sign.

By the summer of 1986, she was in the Air Force and has never regretted her decision. Gender wasn't an issue, not even when she entered a male-dominated specialty as an aircraft mechanic.

"In my entry test, I scored highest in mechanics. If you would have asked me when I was 16 or 17 if I wanted to fix planes, I definitely would have said, 'no,' but to my surprise I loved it and was good at it."

With pride, she described herself as a grease monkey.

"I came home every day with grease on my hands, my face and coveralls. I was a mechanic."

In 1990, she deployed to Turkey for Desert Shield, which transitioned into Desert Storm, the first Gulf War.

"We did maintenance on the F-16s, refueling them, and reloading bombs and missiles," she said.

In 1996, she was again deployed, this time to Kuwait. Saddam Hussein was violating the no-fly zone above that country.

"Our stealth fighters, the F-117s, were patrolling the airspace," she said, adding that the support she and fellow mechanics provided kept them airborne.

"Everybody was proud to serve over there. That's what you were trained to do," Schultz Chapman said.

When the Sept. 11, 2001, terrorist attacks struck America, she realized it was only a matter of time before she would deploy.

"Everyone was getting deployed."

Schultz Chapman was sent to Afghanistan with a squadron of A-10 Warthog attack jets in 2005 and assigned to a base on the outskirts of Kabul, where she served as a flight chief in charge of 40 mechanics.

"We loaded the 30-millimeter Gatling guns and bombs," she said.

But the jets were old and prone to breakdowns, requiring frequent repairs.

And when Warthogs experienced mechanical emergencies during far-flung missions, the pilots sometimes landed in Iraq, requiring Schultz Chapman and her mechanics to fly into that war zone and make repairs.

She says she was fortunate.

"I never came under rapid fire. Aircraft are considered high priorities and are placed in well-protected areas. I did hear missiles going over our base and you could hear gunfire," Schultz Chapman said.

Though she did not venture from the base, she said her impression of Afghanistan was that it was primitive.

"You could see in the distance adobe homes with no electricity or running water. I would see people going down to the river and getting buckets of water. At night, you would see fires going. You got a real good appreciation for being an American. When you see people living like that, you say, 'Wow, we do live in the greatest country,' " Schultz Chapman said. 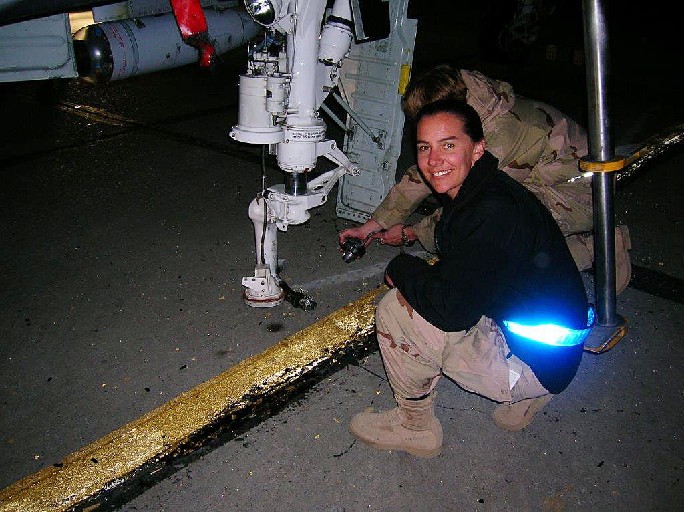 In addition to her war zone deployments, the Air Force provided her with many other assignments, enabling her to fulfill her dream of seeing the world. Some of the places included South Korea, Alaska, Japan, Germany and Israel.

After 21 years, she retired from the Air Force and earned a doctorate degree in business administration.

She now works as the dean of online instruction for Bryant & Stratton College.

That type of work is a lot different from repairing jet engines and loading bombs.

"There's no dirt under my nails now," she said. "But it is very rewarding to educate people."

As for her parents, Myra and Herb Schultz, she says they are both very proud of her accomplishments.

There's someone else who is also very proud of Schultz Chapman – her fiancé, Brad Ellis, who is also retired from the Air Force.

"When I earned my doctorate, he was especially proud of me. He saw the struggles I went through, the long nights, the long weekends. I couldn't have earned it without him. He's the one who held the household together."