One year ago, thousands of people in Buffalo joined millions of people across the country in marches held to protest the inauguration of President Trump.

On Sunday, the anniversary of the initial round of Women's Marches, thousands of protesters gathered again in Buffalo to decry the president's first 12 months in office and to promote equal rights for all.

A diverse crowd of girls and women – along with numerous men – filled a good portion of Niagara Square outside City Hall on Sunday afternoon before they marched through downtown Buffalo to call for stronger protections for abortion rights, the LGBTQ community, immigrants, the environment, prisoners, victims of sexual harassment and others.

"It's just important to protest, and be like, 'No, I'm going to stand up for my rights, and no one can take them away,' " said Carolyn Dokey, 14, a West Side resident who attended last year's march with her mother and this year's march with her father, Bill. She held a sign that read, "My Rights Are Not Up For Grabs. Neither Is My Body." 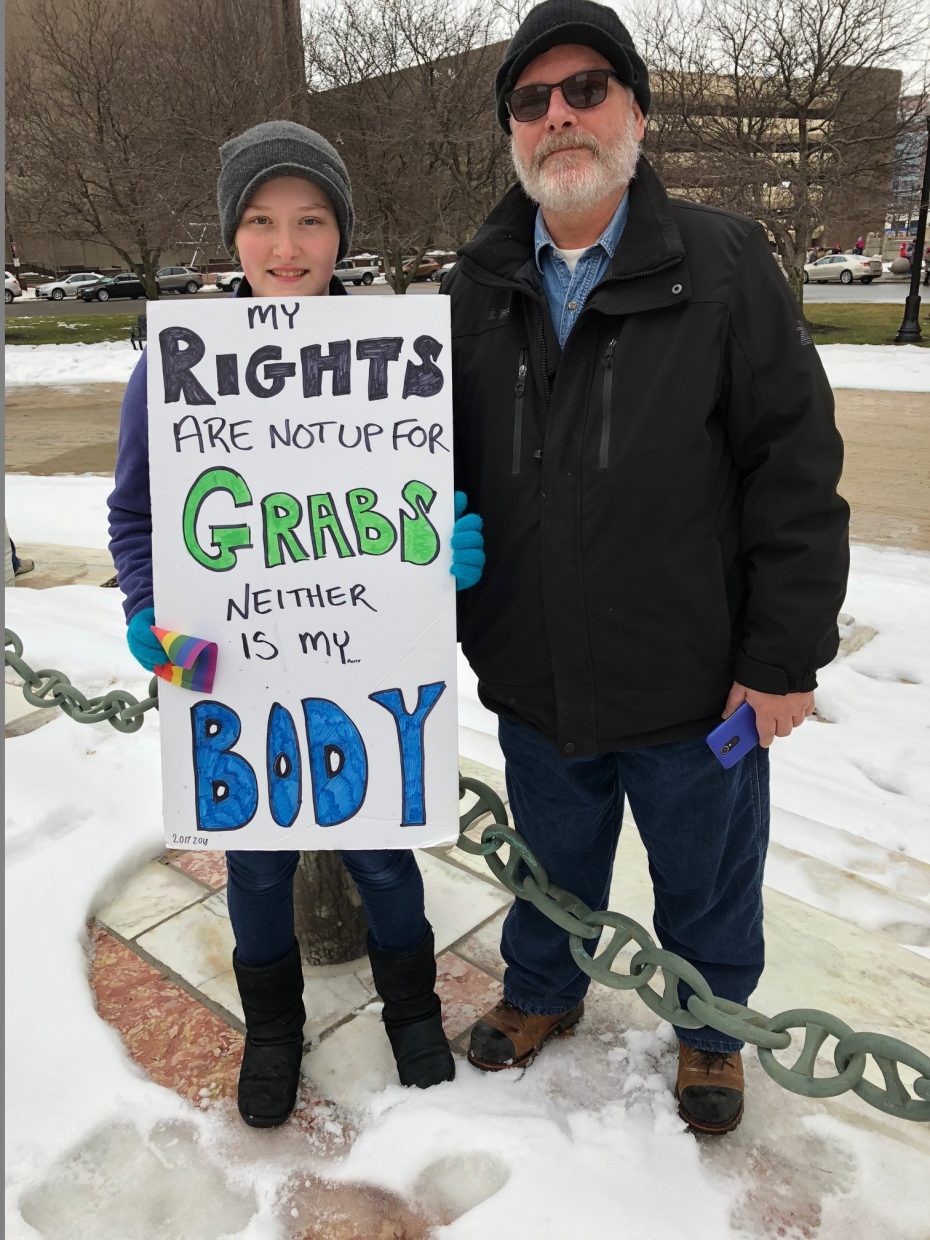 Carolyn Dokey, 14, and her father, Bill, at the rally in Niagara Square. (Stephen T. Watson/Buffalo News)

The protesters carried handmade signs with messages ranging from the defiant to the humorous, with many too vulgar for a family newspaper. A number of marchers wore the pink, knitted hats that came to symbolize the first Women's Marches, while one came as a head-to-toe Statue of Liberty.

"My hope is that it will make it abundantly clear to the current administration that what's going on now is not normal, and it is not OK," said Sherry Byrnes, who lives in North Buffalo and works for a human services organization. Byrnes, whose pink hat had "Resist" printed on it, lamented the president's judicial appointments.

An estimated 2,500 to 3,000 protesters attended the 2017 Buffalo rally held to coincide with the national Women's March in Washington, D.C. Buffalo police said about 4,500 people came out this year.

Tanya Loughead, chair of the gender justice task force for the Western New York Peace Center, told the marchers outside City Hall that they aren't content with simply seeking to return to the way things were one year ago. She said people want economic equality as well as justice for queer and transgender people, people of color and refugees.

"We want it all, and we're not settling for less," Loughead said to roars from the audience, who held up signs reading "I Love People from S---hole Countries" and "Elect a Clown, Expect a Circus." 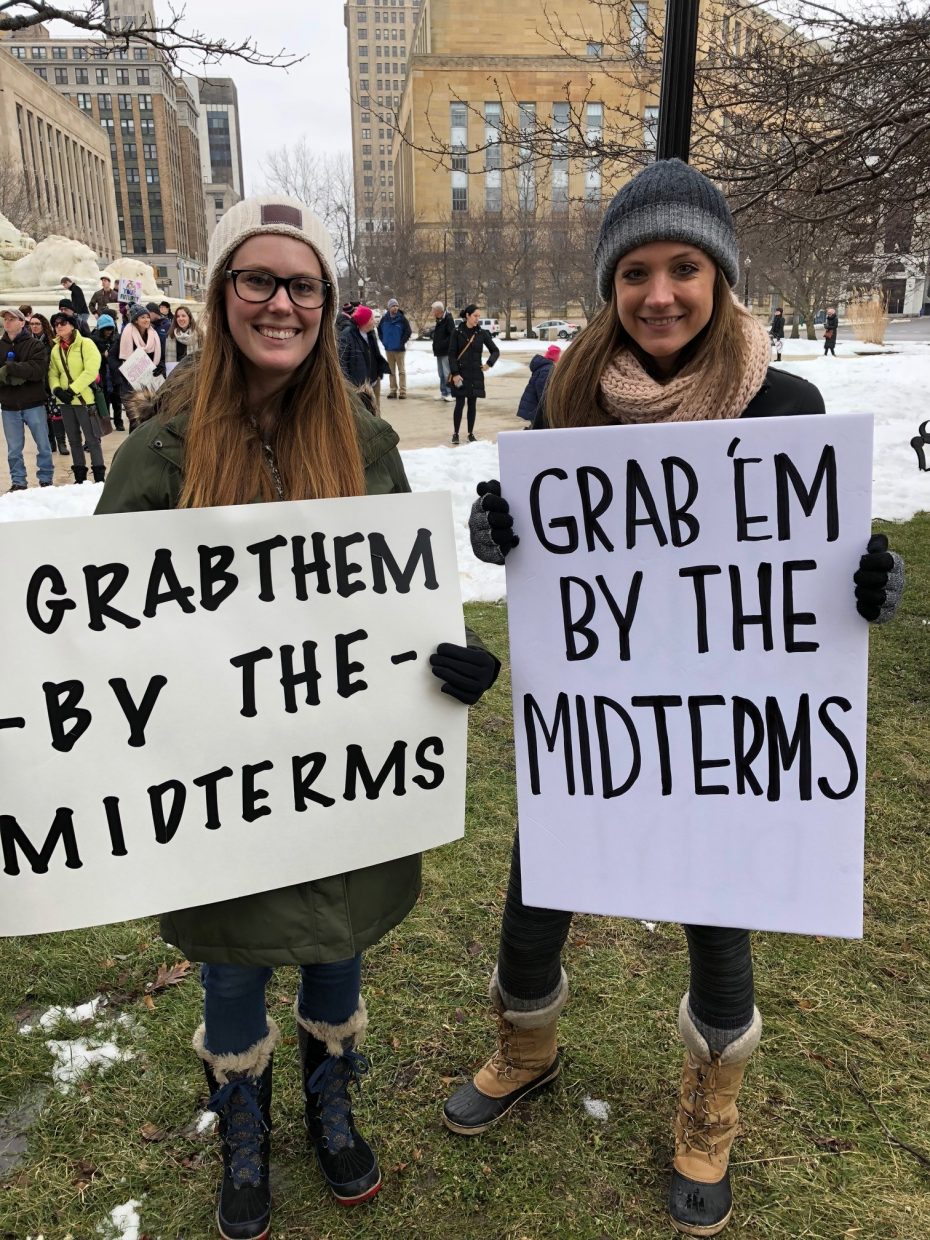 "We will take our country back from hate," Brown said.

People who gathered at Niagara Square said they came because they wanted to send a message to the president and, in some cases, to daughters they brought along with them.

Dylyn Harrison of Niagara Falls and Anna Ross of North Buffalo carried signs with nearly the same message: "Grab Them By the Mid-Terms."

"We can't back down. We've got three more years of this," Harrison said, who is worried about health care and immigrants who were brought to this country as children.

Michelle Morales of South Buffalo brought her daughter, Ahnalya, who is 2 and wore a Minnie Mouse hat.

"We're making history right now, just being here. I wanted to expose my daughter to it," Morales said. "There's something very powerful and positive and enlightening." 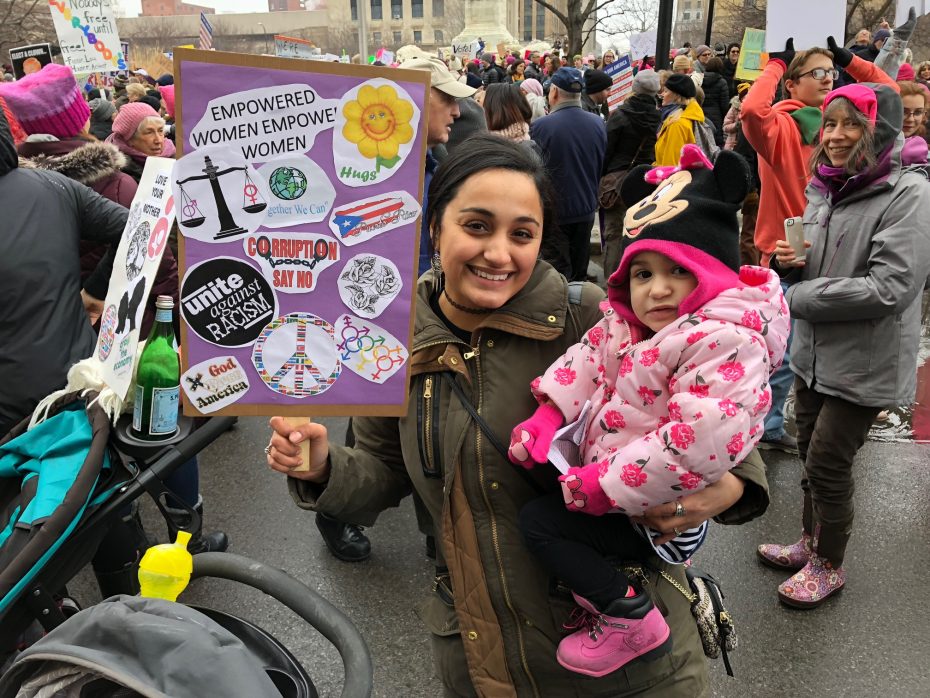 Maya Fleissner, who is 6, came from Amherst with her mother, Katie. Maya held a sign that had the words "Girl Power" written on the universal sign for women.

"It means we have power," Maya said.

After some preliminary remarks and songs from the Women's Resistance Revival Chorus, the marchers set off. Buffalo police had blocked off the street around the McKinley Monument as well as portions of Delaware Avenue, Church Street and Main Street and the rest of the route of the march.

"I believe we are more divided than we've ever been," the North Buffalo resident said. 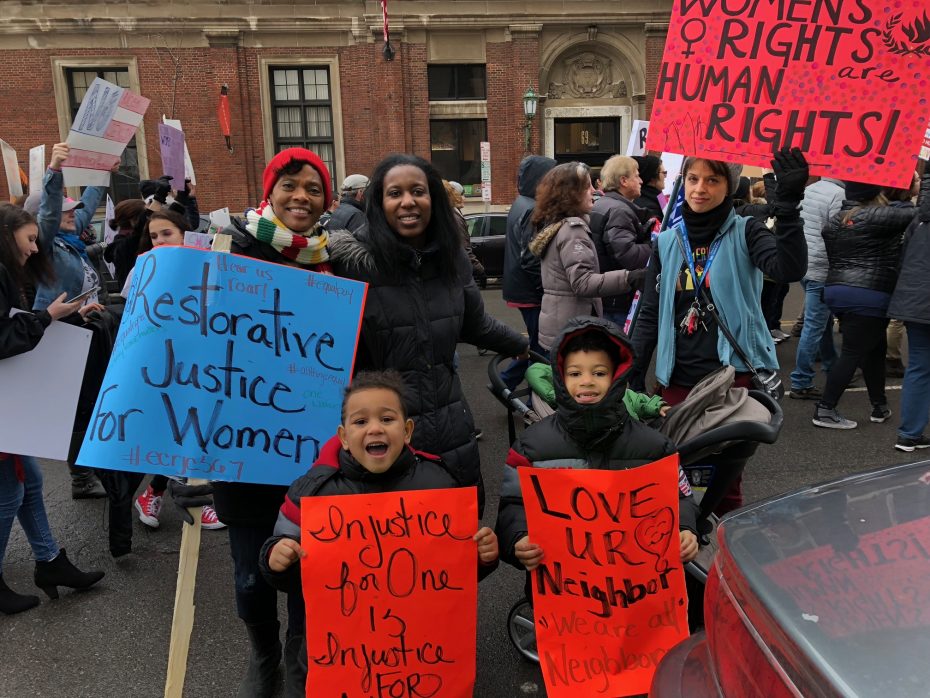 The marchers periodically stopped to listen to speakers on various issues.

Karima Amin, founder and director of Prisoners Are People Too, stood on the steps of the Erie County Holding Center and blasted Erie County Sheriff Timothy B. Howard's oversight of the jail. 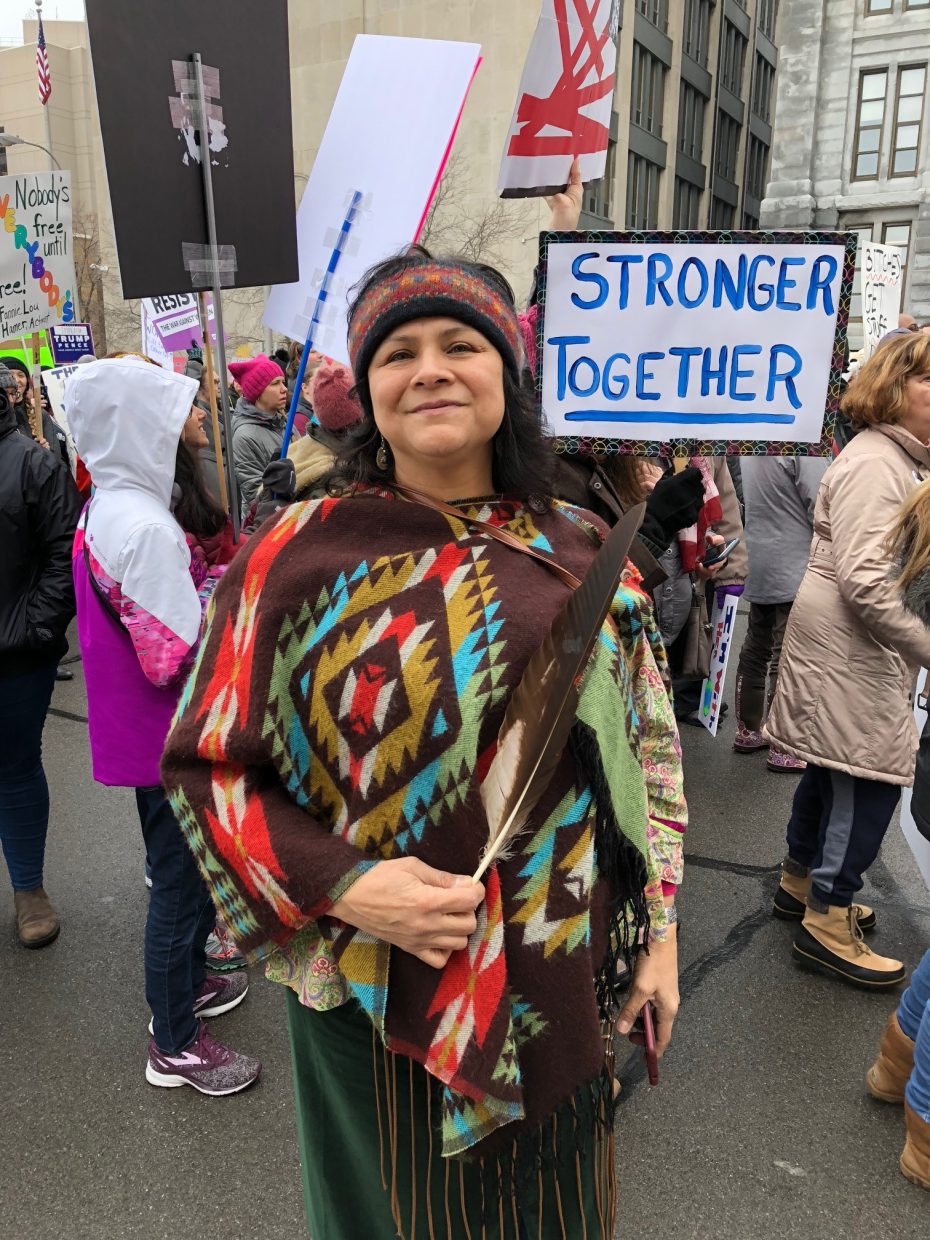 "The racism behind this wall has got to stop," Amin said, citing the inmate and prisoner deaths that have occurred during Howard's tenure. Protesters chanted, "Lock him up." Howard and his aides have defended the jail's operations.

As she marched, Jill Clause, a member of the Tuscarora Indian Nation who gave an opening address at Niagara Square, criticized Scott Pruitt, Trump's selection as head of the U.S. Environmental Protection Agency, as "a horrible choice to protect the earth."

Deb Seifert didn't have to say a word to send her message. She was dressed as the Statue of Liberty, with a torch, a crown and a plastic mask with a tear painted on it.

"I think there's been an assault on immigrants, an assault on women, and so this embodies both of those," said the West Side resident. "It's so much worse than I even imagined." 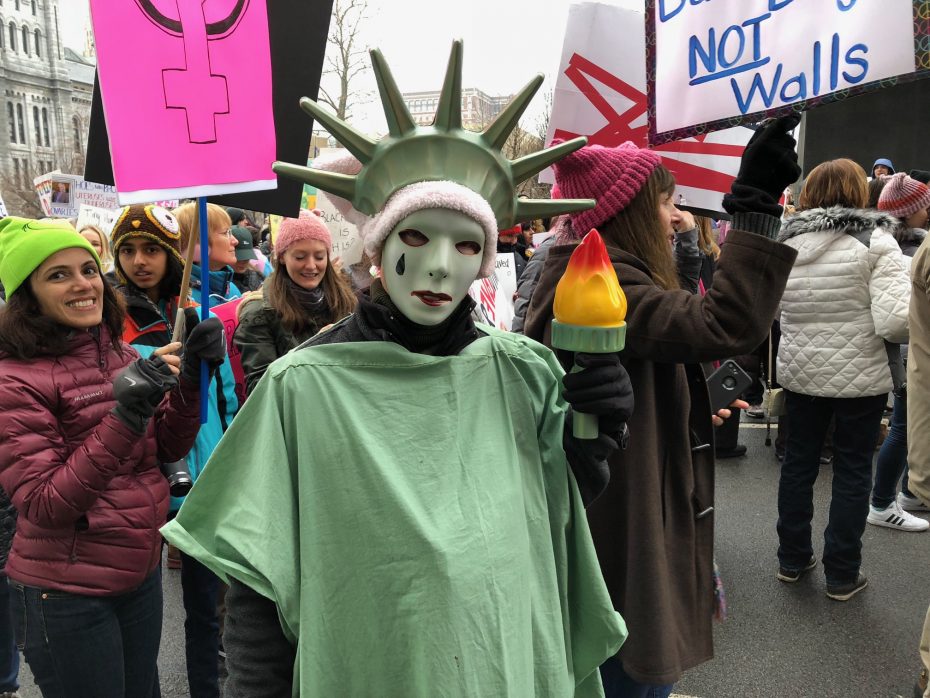