The parcel of land on Genesee Street contained a hodgepodge of abandoned gravel pits and overgrown farm fields in 1995, but Timothy Davis envisioned it as a golf course. He was 34, and Davis, a golf pro, was looking to build his second golf course in the Town of Lancaster.

"If you looked past the gravel pits and fields, there was a lot of nice settings for golf holes," said Davis, who had already designed and built Fox Valley Golf Club, about a mile away on Genesee.

Davis and a small group of workers built the course out slowly, using old equipment they repaired. In 2005, a nine-hole golf course opened with a maintenance barn. A shed was used as a pro shop. By 2006, Buffalo Tournament was an 18-hole course.

Since 2005, the Buffalo Tournament Club has opened for business each year from April through October. It offers a pro shop, parking lot, equipment garage, ninth-hole halfway house and a pavilion for tournament dining — but no clubhouse, despite at least two site plan extensions granted by the Town of Lancaster.

Davis declined to reveal the cost of his decades-long undertaking, but the Lancaster Tax Department appraised the 195-acre public golf course at $1.3 million.

"We're building it out of revenues," Davis said. "Most people spend $10 million. We did not. We didn't want to go deep into debt or have more investors, so we took our time and built things piecemeal as we went along.

"Right now I'm just trying to dig my way out of this," Davis said. "There is no pile of money. Friends gave me a small loan."

Davis in November obtained a building permit for a 3,700-square-foot clubhouse. He and a small team of workers laid the foundation in December.

"In October 2006, he was granted a two-year extension due to economic hardship in the area," said Matthew Fischione, supervising code inspector.  "In 2008, the housing bubble burst, and the clubhouse was never built, but he has done business out of the facility all along.  He is currently compliant on all inspections."

Not your ordinary golf pro

Davis was born in Iowa. He did not graduate from college, but he did attend a few, including College of the Desert, a two-year community college in Palm Desert, Calif., and Louisiana State University in Baton Rouge. At each school he made the football team as a punter and place kicker, but his passion was golf.

"I wanted to become a tour player," he said, "but I was never good enough."

When Davis moved to Western New York in 1988, he negotiated the purchase of more than 200 acres of land on Genesee for the Fox Valley Golf Club. He and a group of partners started construction, and Fox Valley opened in 1992. It was sold in 1994. 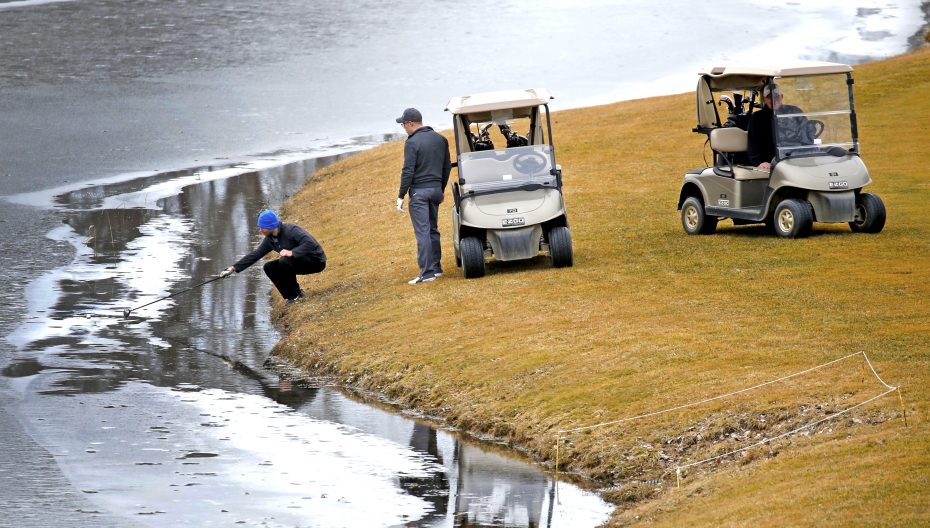 A golfer doesn't have enough reach to retrieve his ball from the ice-covered pond along the ninth hole at the Buffalo Tournament Club course in Lancaster on Feb. 21, 2017. (Robert Kirkham/News file photo)

Davis took a hands-on approach with Buffalo Tournament Club, serving more as a general manager who oversees course operations than a golf pro. To facilitate that philosophy, Davis even lives on the golf course in a Cape Cod house built in the 1950s. The detached garage "really should be torn down," he said.

"You have to be realistic in your plans," Davis said. "Have you seen how many golf courses have failed in the last 10 years? Westwood in Amherst. Brockport Country Club was sold at auction. Harvest Hill Golf Center in Orchard Park was run by the West Seneca Rotary Foundation and failed. Ross Celino bought it for a little more than $900,000 and it did well."

If you build it, will they come?

Buffalo Tournament is a public course that attracts memorial and fundraising tourneys from late May through September, he said.

"Our biggest day is Saturday, when we offer a shotgun start," Davis said. "Everybody starts at the same time. Saturdays fill up fast."

Golfers who played the course through the years witnessed a changing landscape as Davis tinkered.

"In '07 we had a tent for outings, but that blew down in '09, and we built a pavilion," Davis said. "In '08 we paved 11,000 linear feet of blacktop cart paths. Our pro shop and restrooms were in a commercial-grade double-wide trailer. We've used it for 10 years.

"Clubhouses are expensive to build."

One year Davis added a golf league, said Ronald Ruffino, who played a few tournaments at the golf club.

"It's kind of hidden," Ruffino said of the course. "They've shown progress over the years; he started to fix it up. The only thing is that the pavilion, where tournament dinners are held, is open air. If it wasn't good weather, there was no way to get away from it. That was not a good experience."

"He had a site plan review approved and was ready for [clubhouse] construction in 2017," said Fischione, the town's code inspector. "I'm really not too sure why it was never completed. It may have been he was doing it in phases."

Building or rebuilding a golf course can take years, acknowledged Thomas Ahern, general manager of Niagara Falls Country Club, a private course in Lewiston. In April 2014, Ahern began the process of rebuilding 16 of 18 greens, at a rate of one to two a year.

"Unless you have tons of unlimited funds, you need to plan it strategically," Ahern said. 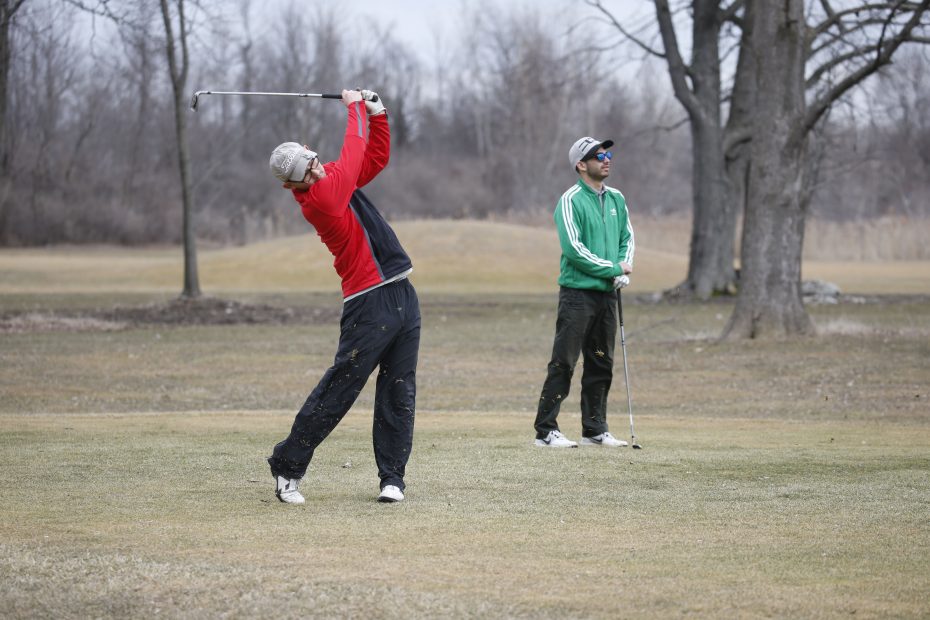 William Cansdale, superintendent of public works for the Village of Lancaster, played the Buffalo Tournament course over the years and has watched it evolve. Cansdale said he was surprised the project has taken so long.

"People come in and get site plans approved, but you don't have until the end of time to complete the development," he said.

Meanwhile, Davis said, the golf course gets a little bit better every day.

"The old gravel pit holes are down in the canyons without trees," Davis said. "Other holes run through farm fields and have a park-like setting. There is nothing contrived or funky out here. It's just good basic golf."