The former engineer with General Motors remembers reading the little ad from Lutheran Trinity Church asking for volunteers to establish a Habitat for Humanity branch in Buffalo. He stepped forward to help establish one. That was 31 years ago.

"It just seems like the more we were blessed, the more houses we were able to do," Talboys said. "And the next thing you know, 30 years have gone by."

On Saturday, the organization he helped found celebrated the construction or rehabilitation of its 300th house – a pale blue, ranch-style home on Wende Street in the Bailey Green neighborhood on the East Side.

The house now belongs to Awal Hissu, a father who came to Buffalo from Ethiopia nine years ago. With him was his 5-year-old daughter, who shyly tucked her face into her father's pant leg while dozens of people descended on his modest, four-bedroom home to celebrate the big milestone event. 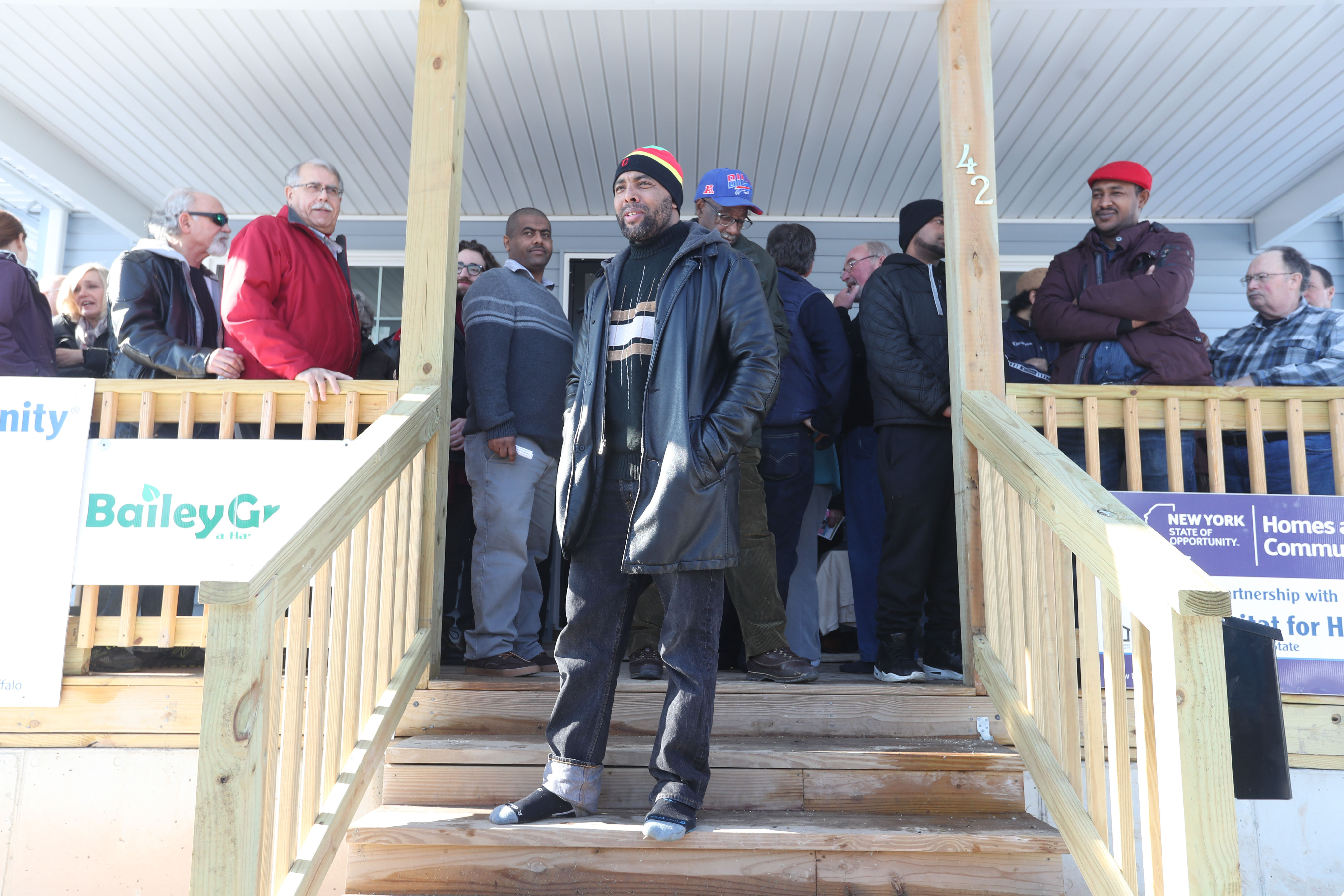 New owner, Awal Hissu, on the front steps of his home. He'll be moving in with his 5-year-old daughter Sumyen Ominew. (Sharon Cantillon/Buffalo News)

"Today, we have 300 families living in safe, affordable homes," said Executive Director Teresa Bianchi. "Communities are being lifted up because of Habitat for Humanity of Buffalo."

Talboys recalled how local residents were the first beneficiaries of homes Habitat for Humanity built in the city, before the influx of Eastern Europeans, then refugees from Africa and Asia added to the mix.

Over the past three decades, Talboys and Bianchi said, Habitat for Humanity has carried forward a Christian mission to build or rehab affordable housing with the help of thousands of volunteers, including the prospective homeowners.

Qualifying homeowners aren't given the houses. Instead, after putting in 500 hours of "sweat equity" toward other Habitat homes, as well as their own, they qualify for 30-year, no-interest mortgages that are subsidized by Habitat for Humanity.

Talboys served as president of the local Habitat from its inception to 2015, when he retired. At 77, he still serves on the organization's board. The father of two grown children, he described Habitat for Humanity as his "third child." A volunteer builder and mechanical engineer by training, he said, he eventually learned how to install furnaces.

"Doing heating systems is like playing with a giant Erector Set," he said. "And if it does help people, it's all the better."

The 300th Habitat house was built on a street that already has six other Habitat houses. Six more houses are planned for the next street over in 2019, Bianchi said. This neighborhood cluster of Habitat homes is being built with the support of Harmac Medical Products, which is located a block away at Genesee Street and Bailey Avenue.

At Saturday's ceremony, Hissu was showered with housewarming gifts. Along with a toolbox, plants, cleaning supplies and other gifts, he was handed a Bible, which Bianchi said was a gesture of the Christian organization's ongoing support for him and his family. Hissu, who is Muslim, also was invited to share one of his holy books with the organization. 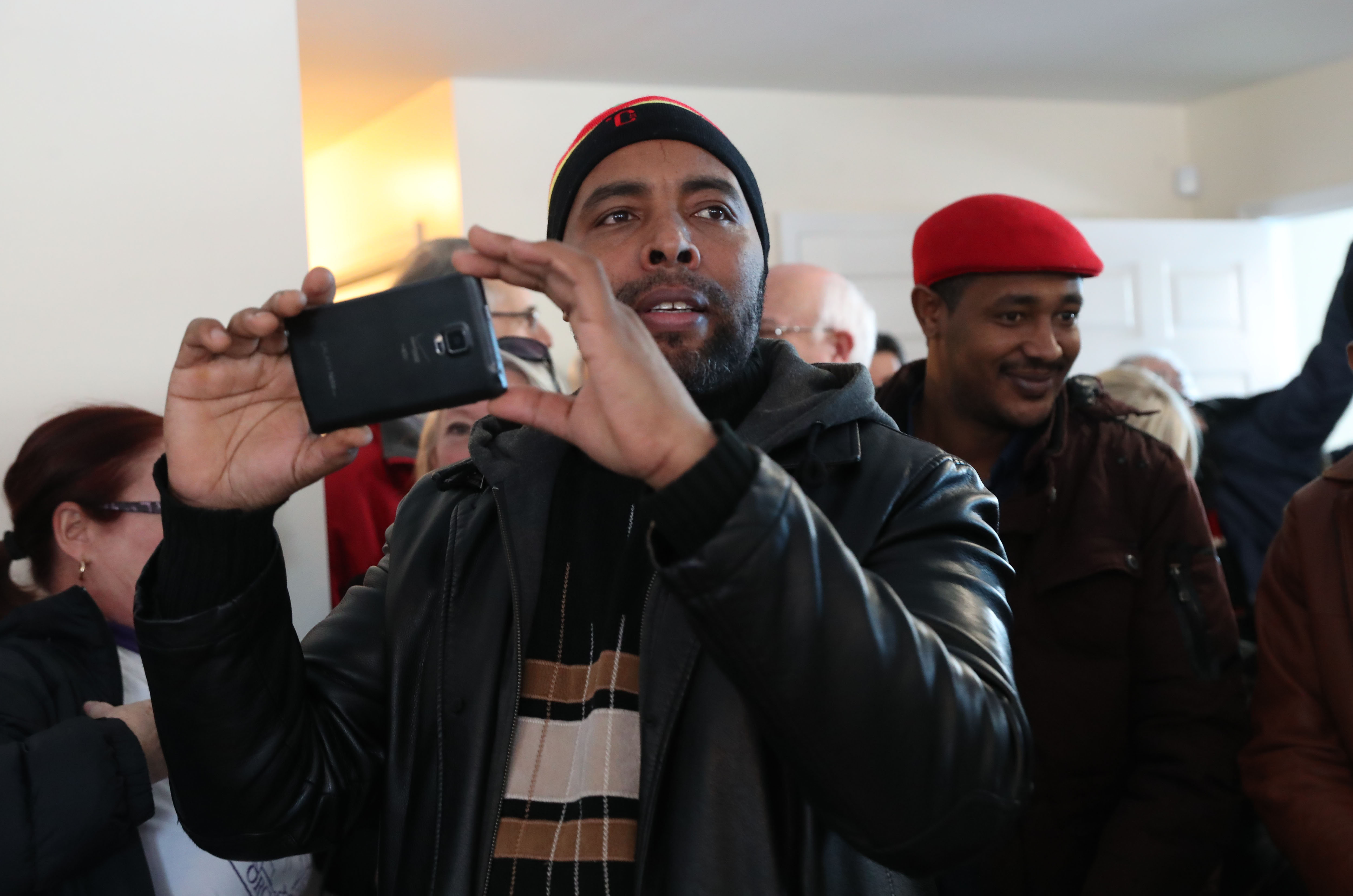 Though Hissu didn't have one to give, the leader of his mosque, Pasha Syed, imam of the Jami Masjid on Genesee Street, offered his thanks to Habitat for Humanity for its generosity and support to Hissu's family. Then he offered a quote from the prophet Mohammed, saying, "God is in the service of the servants who are in the service of our brothers and sisters."

He later added, "Any background, any faith – we all have to work together to lift each other."