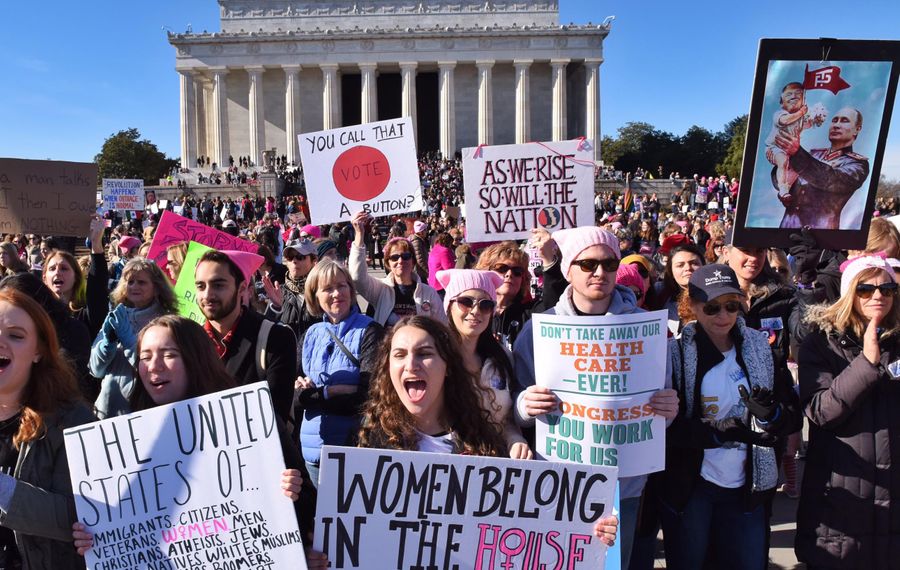 A year ago, when millions of people stormed the streets in women's marches to proclaim their outrage and despair at the inauguration of Donald Trump, no one knew whether it was a moment or a movement.

Now the answer is coming into focus. Women have become the foot soldiers and emerging leaders of a two-pronged effort: sustained political resistance to the Trump presidency, as they run for office in unheard-of numbers; and a broader cultural challenge to men's power and privilege, embodied by the #MeToo uprising.

"Everyone kept saying people are going to burn out; don't highlight all the terrible things that are happening," said Fatima Goss Graves, chief executive of the National Women's Law Center. "But I haven't seen a weakening."

Marchers once more took to the streets this weekend, gathering in hundreds of cities across the country and around the world, from Osaka and Rome to New York and Chicago. But even with the show of strength, the movement faces several hurdles.

Leaders in the United States say it is no small task to sustain enthusiasm and plot strategy in the face of policy defeats on a range of issues. Trump has appointed conservative judges and empowered federal agency leaders who have approved work requirements for Medicaid, religious exemptions for providers who oppose abortion, and changes to campus guidelines for sexual assault. Gender – and the charged issue of sexual harassment – has proved a resonant rallying cry, but it has also stoked a backlash. The movement has largely become synonymous with progressive causes, alienating some who may dislike Trump but part ways on abortion, economic policy or other issues.

The #MeToo moment and allegations of men sexually harassing women, in particular, has resonated more with some women than with others. Nancy Isenberg, author of "White Trash," an expansive look at class in the United States, said the working-class women she has studied are far more skeptical of claims of sexual harassment that do not involve violence.

"Unlike the MeToo crowd, they do not see all women as facing the same kind of abuse, and reject the idea that all women suffer from sexism in the same way," she wrote in an email. "Conservative women often want to protect the privileges they have (which often means enforcing traditional gender roles, not eliminating them)."

Yet organizers said they were putting aside their divisions, even as some groups disagree over who can claim the mantle of the Women's March. "What we saw in 2017 was that women are prepared to carry more than their share of weight for defending our democracy," said Ai-jen Poo, director of the National Domestic Workers Alliance, one of the many advocacy groups that were partners in the original march and provided resources and training to women throughout the year. "I think that women are driving and leading a transformation in American and civic life and culture that is unendingly hopeful."

Poo herself embodies the merging of these strands of the movement. For years she worked in relative anonymity championing domestic workers, but walked the red carpet as Meryl Streep's guest during the Golden Globes as celebrities sought to make common cause with less privileged women in the wake of the uproar over sexual abuse.

While the marches were the first tangible demonstration of women's anger and resolve, the health care fight proved the first test of how to channel that energy. Women took the lead, spurred by advocacy groups that married traditional community organizing tools with online templates.

With Congress poised to end Obamacare, women deluged their representatives with calls and letters, and confronted them at town halls. In one survey conduced by Celinda Lake, the veteran Democratic pollster, women placed 86 percent of 28,000 calls and texts to Congress on health care through Daily Action, another postelection resistance group. Planned Parenthood funneled more than 350,000 such calls, according to Kelley Robinson, its national organizing director. The Women's March estimates that its participants sent 250,000 postcards to senators. And at town halls during congressional recesses, women offered vivid accounts of what would happen to them or their families without affordable health care.

The furor about health care crossed usual partisan lines, and along with internal fractures within the Republican Party, prompted enough Republican defections to thwart repeated attempts to end Obamacare through legislation.

As for #MeToo, the pink hats that became the emblem of the marches offered an early clue to the persistence of an issue many women believed was buried by Trump's election. The hats were a reference to Trump's comments, caught on an Access Hollywood tape, bragging about kissing women and grabbing their genitals without their consent. The emergence of the tape just before the election provoked an outpouring of women testifying about sexual harassment. It was not until this most recent wave, though, that men lost jobs – and in some cases, women are taking their places.

The broader cultural conversation that #MeToo is generating will lend the movement additional momentum, its organizers contend. "The words 'patriarchy' and 'misogyny' have probably been used more in the past two months than over the past two decades," said Kathy Bonk, long active in the women's movement.

Lake said an overview of current polling, as well as focus groups and polls her own firm has conducted, suggest that health care and sexual harassment are the issues that matter most to women, and give female candidates the most traction.

Galvanized by the election, women are proclaiming their intent to run for office at record levels – a trend that began right after the election and has only intensified since.

Debbie Walsh, director of the Center for American Women and Politics at Rutgers, has tallied 390 women who say they will run for seats in the House of Representatives – 314 are Democrats and 184 of them are running for seats held by Republicans. Nineteen Democratic women are challenging incumbents in their own party in primaries. That fervor extends beyond the federal level: 79 women say they are running for governor. Walsh thinks it's possible that 15 women, a record, could withstand primaries and run for governor in general elections.

Mustering money and support for women who run, as well as concerted efforts to increase voter registration and turnout, are explicit aims not only of the Women's March organizers but virtually every group mobilizing for elections at all levels of government. On Sunday in Las Vegas, a march will culminate in a voter-registration drive called Power to the Polls; parallel efforts abound.

Inspired by the women's march last year, Megan McCarthy, who lives in a solidly Republican suburb of St. Louis, organized a "huddle" – mostly women and some men devoted to sustaining political involvement. One member of the group is running for state office for the first time – and the group is also rallying behind efforts to flip the district's long-standing Republican House seat.

Ellen Bravo, a director of Family Values at Work, said she was recently in a small general store in Spring Green, Wisconsin, and learned that the store clerk was going to make her first run for local office.

Money is flowing to Democratic women who are running, said Sarah Bryner, research director of the Center for Responsive Politics. They are raising as much as their male counterparts, and even in the first nine months of 2017, the center saw double the number of Democratic women who donated money compared with 2016.

Democrats are particularly emboldened because of the role women have played, as voters and organizers, in recent victories over Republican candidates in Wisconsin, Virginia and particularly in the defeat of Roy Moore in Alabama.
The Alabama contest showcased another demographic for the movement: Black women, so outraged by exit polls suggesting that the majority of white women voted for Trump, are playing leading roles. Racial tensions that flared among some organizers before the first women's march appear to have ebbed.

A strong gender gap continues to play out in approval ratings for Trump. While trends fluctuate, Lake said recent polls show that independent women, who broke for Trump at the last minute in the election, now largely oppose him, while independent men still approve of him. Majorities of rural women and women without college educations still support him, but Lake said she had seen some softening in those groups.

Gender can alienate as well as energize. Emily Ekins, director of polling for the libertarian Cato Institute, said that in general, gender issues do not seem to galvanize Republican women to the degree they do Democratic ones. And her polling found many conservatives and even some liberals still feel inhibited and resentful discussing issues like gender and race, which can lead to election surprises.

As the marchers rally this weekend, they are girding for battles – and an increasing number of legal challenges – on a vast range of fronts: abortion rights, changes to Medicaid and Medicare, and environmental regulations. Many expect setbacks at the federal level, so they will turn to states and localities.

"Last year, I just felt kind of angry and impassioned," Ann Dee Allen of Wauwatosa, Wisconsin, said at the march in New York on Saturday. "This year, I just feel like I'm in it for the long haul."