Buffalo winter storms are as renowned as its wings and weck.

But what will happen to the region's weather as the earth turns warmer? Does that mean less snowfall in the future? Or could the area's infamous lake-effect snows pile up even higher?

A University at Buffalo researcher thinks the answers to those questions, or at least the clues, can be found in the unlikeliest of sources – ancient leaf wax.

Elizabeth K. Thomas, a geologist and paleoclimatologist, figures she might be able to help forecast future snowfall for the area by knowing how much snow fell during a period of time – 5,000 to 10,000 years ago – when the earth was being warmed due to the configuration of its orbit around the sun at that time drawing in more energy.

"What we'd like to do eventually is look at how lake-effect snow behaved during that relatively warm period, and see if that can be helpful in informing us about what Buffalo is going to look like in the future," she said. 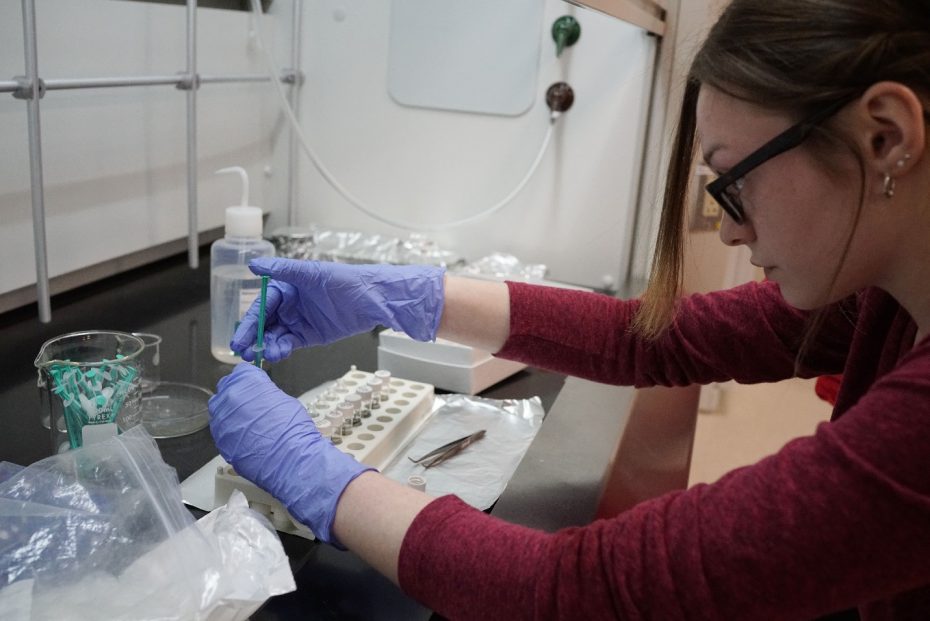 Her work won't be able to predict whether schools will need to be closed in a given week due to snow. But Thomas said she hopes someday it can identify long-term historical snow behavior and patterns, so that the information then can be used as a kind of analog for today and the future.

"The ultimate goal is really to help Buffalo and Watertown and other places that are in lake-effect snow belts, to give us a baseline for how do we plan for the future," she said. "I know nothing about municipal budgets, but I'm sure there's a lot of thinking about, 'How much salt do we need? What do our plows look like? Are we going to need those a lot in the future? Are we going to need more? Or is this lake-effect moisture just going to fall as rain and so maybe we'll need those plows for 20 more years and then it's going to be mostly rain from there on out?' "

Scientists already have good data, from a variety of methods and tools, about global temperatures dating back hundreds of thousands of years. What's less clear is what precipitation looked like. Analyzing leaf waxes is a relatively new way to reconstruct historical seasonal precipitation, and Thomas is among a small but growing group of researchers using waxes to learn about past climate.

"The waxes are so resilient they really preserve well. They don't easily degrade," said Bryan Shuman, professor in the Department of Geology and Geophysics at the University of Wyoming.

Shuman has used leaf waxes in his studies of past moisture and lake levels in the Northeast.

Leaf waxes can be preserved in rock or sediment for hundreds of thousands of years, and scientists are still learning about what other kinds of information they can glean from such materials, which Shuman described as the "weather stations" of history.

"This whole area of studying organic matter that's preserved in the earth has huge promise," he said.

Thomas and a research team of undergraduate and graduate students are currently collecting weekly sediment samples from a pond in North Java, Wyoming County, to see if they can differentiate between rain and snow based upon the hydrogen isotope levels in leaf waxes from aquatic plants versus those in terrestrial plants.

The researchers extract organic compounds from the collected muck and purify the compounds so that only the leaf waxes are left.

Thomas then uses a tool she learned as a doctoral student in biogeochemistry at Brown University to analyze the leaf wax isotopes and approximate if rain or snow fell and how much. If she can map out seasonal precipitation by examining current-day sediment, the next step in the research will be to find and test sediment samples from 5,000 to 10,000 years ago.

"If we know how they behave today in a seasonal pattern, then we can say, 'Alright, in the past they most likely tell us about the same types of seasonality,' " she said.

What's the difference between rain and snow? It boils down to atomic weight. Snow tends to have a lighter isotopic composition than summer rain.

Thomas also will distinguish lake-effect snow, which has a different "isotopic signature" than regular winter snowfall and tends to be even lighter.

Thomas has a personal history with snow. The daughter of a mother and father who are both geologists, she grew up in Skaneateles, a town near Syracuse that gets its fair share of lake-effect snow courtesy of Lake Ontario.

"I'm definitely used to this kind of weather," she said. "They get more snow than we do here on North Campus."

She knows firsthand because she tracks snowfall amounts – and whether its lake-effect or not – on the roof of Cooke Hall, while her father does the same in Skaneateles.

Prior to arriving at UB in 2016, Thomas primarily researched past climates in the Arctic and in Asia, including studying the monsoon's reaction to changes in Earth's orbit around the sun.

"I'm still doing work in those regions, but we've got awesome climate and weather here to study," she said. "It's really great to do work in our backyard. That's how you get students in the field doing work, getting their hands wet and dirty and to connect with the community as well." 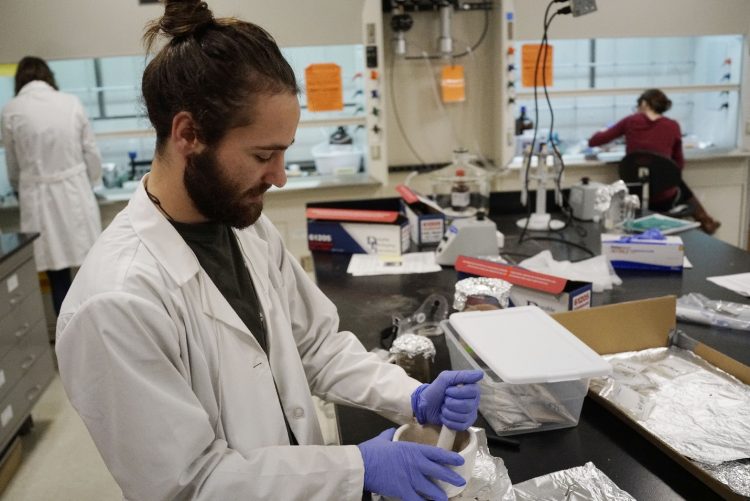 Geology student Nate Marshall grinds a 450-million-year-old mud sample for testing in the lab of UB Assistant Professor Dr. Elizabeth Thomas, a geologist and paleoclimatologist who is using mud cores collected from area ponds and bogs to determine historical precipitation trends by analyzing the molecules of leaves in the sediment. (Derek Gee/Buffalo News)

Thomas discussed her research with a reporter inside a small office of Cooke Hall, on a morning when the temperature outside hovered around zero and snow on the ground crunched loudly under foot. It was part of long stretch of December and January days with below-freezing temperatures and frequent snow squalls that had many Western New Yorkers longing for a warmup.

And more than disprove climate change, the Arctic blast that has blanketed the region for much of the winter could very well be a symptom of it.

Thomas points out that increased carbon dioxide in the atmosphere doesn't simply make any individual spot in the world warmer and warmer. It appears that as the Arctic region warms faster than the rest of the world, the jet stream tends "to get wobblier and bring that polar air south," she said. "So we do get this really cold Arctic air that can kind of settle over this part of North America."

It's a potential recipe for massive storms like the one that dropped seven feet of lake-effect snow on parts of Western New York in 2014, causing more than $46 million in damage throughout the region.

"So what happens if in general the globe is warming and the Great Lakes are warming, so we're getting warmer and warmer lakes that aren't freezing over as much and then we get this cold blast?" she said. "That's the perfect setup for a big lake-effect snow event."

And it is all the more reason for Thomas to go back in time to figure out what happened when Earth was a full degree warmer, on average, than it was just prior to the Industrial Age, when humans began pumping carbon gasses into the atmosphere. The Arctic was extremely warm during that early Holocene period, when the jet stream also may have been wobblier. Thomas hopes to use paleoclimate data from that time and work with climate modelers  to help provide "good predictions for the future."