Campus WheelWorks over the years has looked to do what it can to keep its business rolling through the winter.

In the middle of this "New Buffalo" decade, the cycling shop tried its hand at cross-country skis, snowshoes and fat bikes, a combination its staff believes helped it land in a cold weather sweet spot.

“Once you do one of these outdoor winter activities, it's a life-changing experience for a lot of people," said Matt Dunning, manager of the Elmwood Village shop that has been in business for more than a quarter century. “"People who are active in the winter are happier in the winter.”

Campus WheelWorks is among dozens of year-round enterprises in Western New York that has looked to make more room for winter fitness and fun – both inside its walls and beyond. 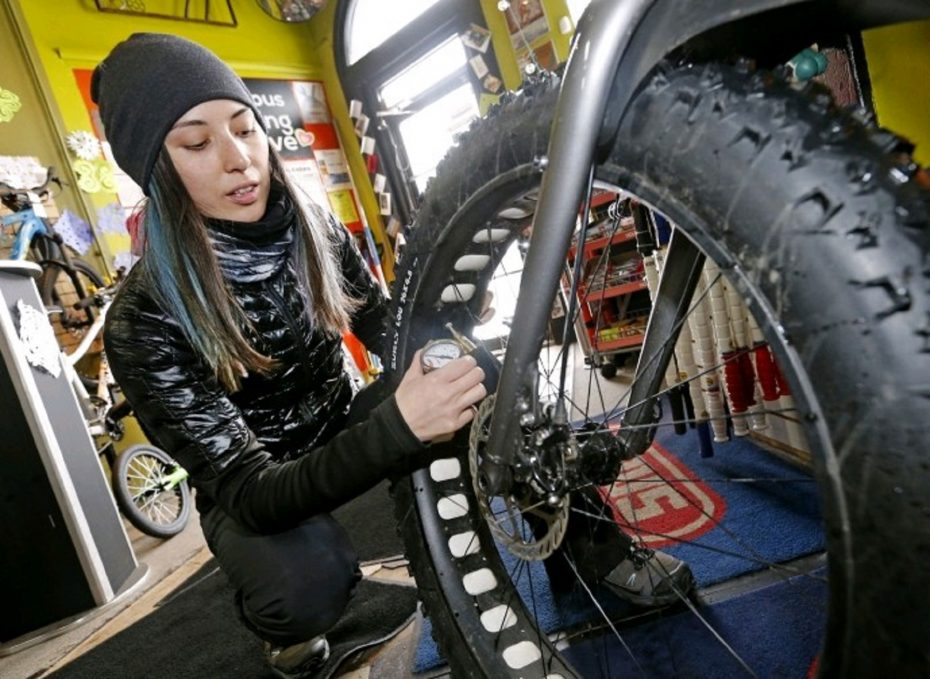 Jenn Kowalik checks the inflation on one of the tires of her "fat bike" at the Campus WheelWorks in the Elmwood Village. (Robert Kirkham/Buffalo News)

Dunning and Jenn Kowalik, bike shop inventory manager, revel in planning and participating in the events.

Kowalik, 28, who lives in the Elmwood Village, doesn't know how to drive a car. Dunning, 33, who lives on the West Side, does. Both choose to bike to and from their destinations throughout the year.

"Buffalo is generally pretty good for winter cycling," Dunning said. "You need to have the right gear and make sure you're protected from cold winds and cold temperatures. Once you have your gear, the streets – especially the main streets – are taken care of pretty well."

Road bikes, mountain bikes and fat bikes all are suitable for winter riding.

"Some people prefer thinner tires that will cut through the snow," Dunning said. "Some people prefer thicker tires that kind of float on top and have a little bit more traction, but you can pretty much bike on anything. It's way easier to do than most people think. As long as you cover up your skin, you can take almost any bike and do it. It's a matter of getting out there."

During the fair-weather months, people ride bikes for fun, fitness and because they must. Dunning and Kowalik find themselves in all three categories year round.

"It's frustrating when people get down on cyclists in the wintertime," Dunning said, "when maybe that's their only form of transportation. Cycling for pleasure in the wintertime is less common but with the fat biking, that's probably the most fun thing. You don't go as fast on the fat bikes but you stay warm really easily and you can ride all over the city of Buffalo." 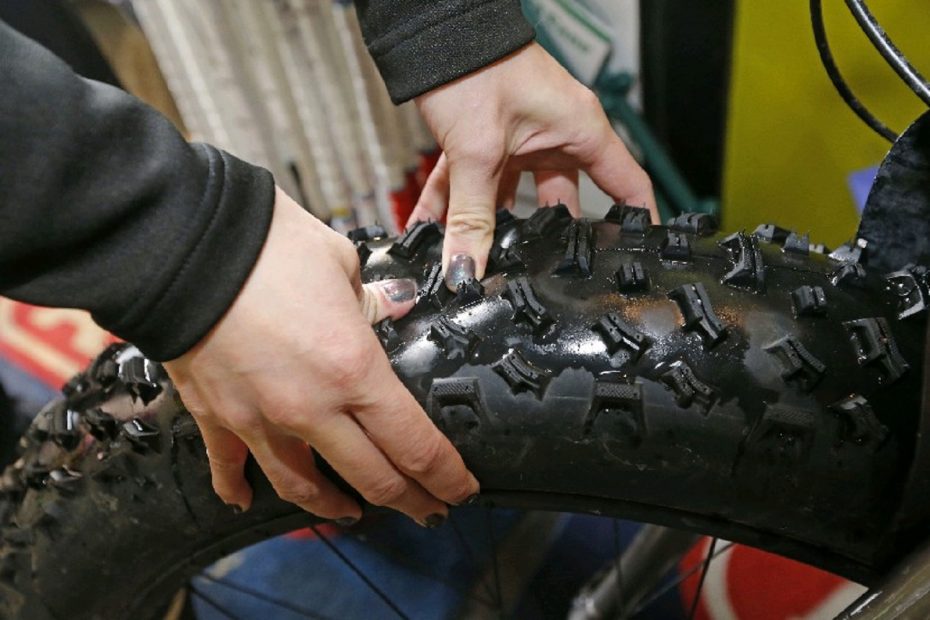 Fat bikes evolved during the last three decades as mountain biking enthusiasts looked for more maneuverability on terrain as diverse as the Alaskan tundra, California beaches, and Mississippi river banks. They became more commercially available about a dozen years ago and began to gain a greater following about five years ago.

During wintertime especially, cyclists tend to ride them at a low tire pressure, about 7 pounds per square inch, versus 30 to 60 PSI for other style bikes.

Low-end fat bikes fetch about $300 to $500 in a discount store. Campus WheelWorks sells the Felt DD 70 fat bike for $1,349. It boasts an aluminum frame, hydraulic disc brakes, derailleurs, and tubeless-compatible wheels and tires. The shop this winter has sold out of the Salsa Beargrease, a carbon fiber-framed fat bike that runs $2,000-plus. The higher-end bikes are lighter and built to last far longer than discount varieties. "Once you have it, it's like free fun," Dunning said.

Those keen on trying before they buy can reserve a bike for a Monday night ride by calling the shop at 881-3613. The Campus Cycling Collective will make them available for $1 the first time out. They also can be rented for $15 an hour or $50 a day anytime, year round.

Popular spots to take them include Delaware Park; Rails to Trails across the region; and the Buffalo Outer Harbor, where Buffalo Fat Bikes rents them at Wilkeson Point during better weather. The Western New York Mountain Biking Club is among those at work on a mountain bike trail in the Outer Harbor that will be perfect for fat biking, Dunning said.

"Even if you've done all kinds of cycling, when you ride a fat bike you get a big smile on your face," Dunning said. "You feel like a little kid running around and playing in the snow. It's really a good time."