Because as Buffalo goes, so does this hotel.

When it opened in 1904 as the Lafayette Hotel, Buffalo was the eighth-wealthiest city in the country. A century later, things weren't looking so good.

The grand hotel in the heart of downtown had fallen on tough times. You wondered who lived there, who went out on that one, single, tiny, charming balcony overlooking Lafayette Square. On the other hand, you didn't want to know. It was that dingy. 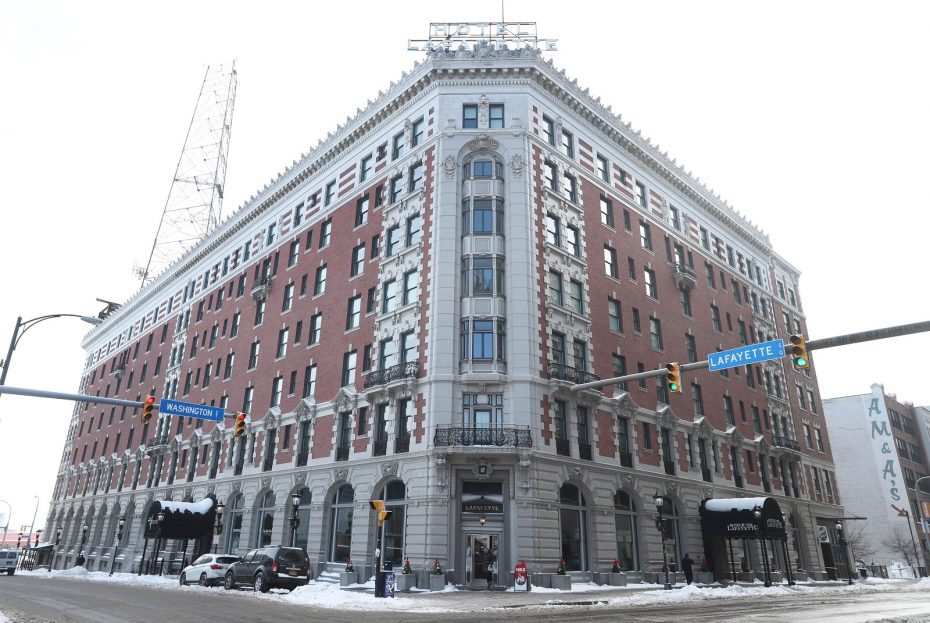 The one bright spot in the big, decaying building was the Lafayette Tap Room, a popular blues bar. My dad had lunch in the Tap Room and said it looked just as it had in the 1940s, complete with the big buffalo head on the wall.

But if you peeked at what used to be the hotel's lobby, it looked ghostly and bereft. My mother pointed to a forlorn corner which, she said, had once housed a coffee shop. Both of us sighed. Clearly, this was hopeless.

That's why, marveling at the Lafayette now, a Buffalonian can grow emotional.

The hotel was the work of the nation's first woman architect, Louise Blanchard Bethune. She had designed the place in an ornate style known as French Renaissance. 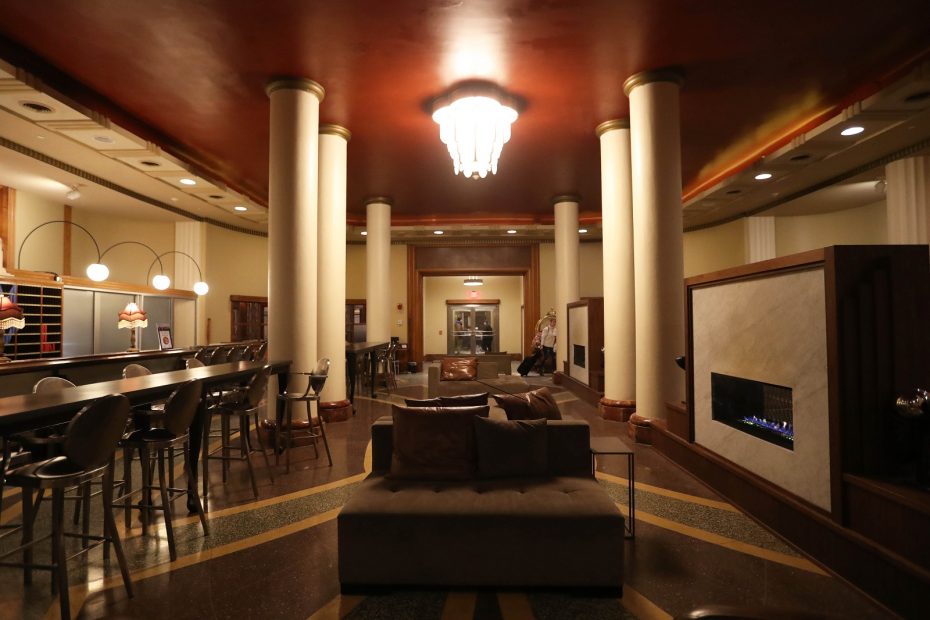 The lobby was decorated in 1942 in the Art Moderne style. (Sharon Cantillon/Buffalo News)

She couldn't have guessed that it would come to signify Buffalo's renaissance.

Few would have guessed that the hotel would return to its old splendor. A coffee shop, Public Espresso + Coffee, now sits where sat the coffee shop that my mom remembered. The coffee is even roasted on the premises. The aroma drifts through the hotel, and it's intoxicating.

Rocco Termini, the developer who bought the hotel in 2009 and launched the $40 million renovation, took the time to attend to every detail. Italian experts were summoned to see to the scagliola, the distinctive red, marble-like stonework that line Peacock Alley, the hotel's main promenade.

Peacock Alley got its nickname because of the grand ladies who, long ago, swept down the hall in elaborate gowns. Buffalo State College's esteemed Art Conservation Department restored the hallway's paintings.

The hotel had an Art Deco makeover in the 1940s, and this history plays out in Peacock Alley. At some point in the hall the Art Deco flooring ends, and the original 1904 white tiles begin. Those same white tiles, also painstakingly restored, cover the floor of the Crystal Ballroom -- located, explained general manager Steve Walsh, on the site of the hotel's old restaurant. 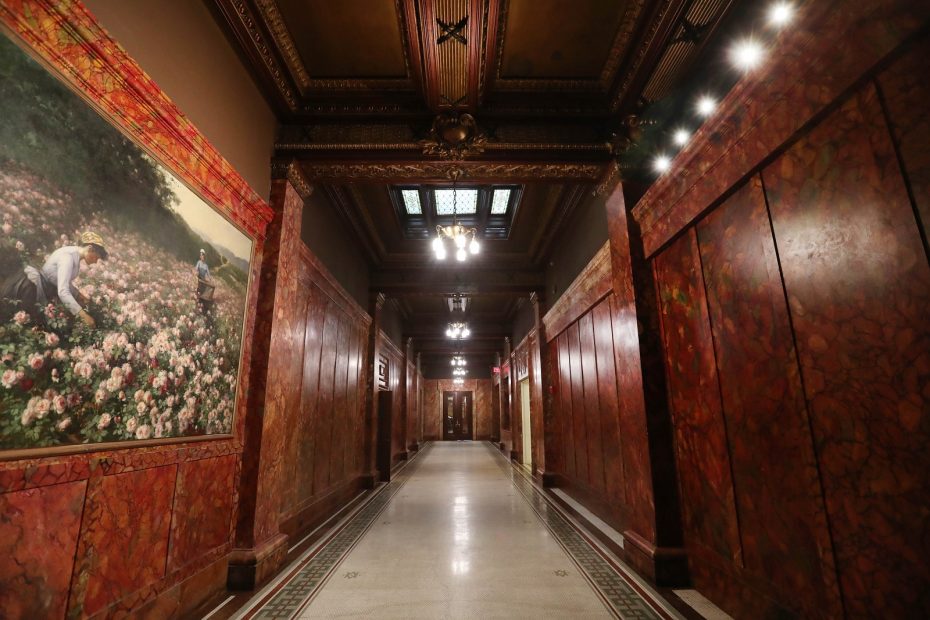 Peacock Alley is still the name for the hallway leading to the banquet rooms. It refers to the ladies' clothing and head pieces. (Sharon Cantillon/Buffalo News)

"It's definitely an example of how to do things properly and respect the history of the building," Walsh said proudly. "Rather than have it look spanking new, people want to feel the history."

Arched windows in the ballroom let in the light. Delicate plaster work can make you think of sugar and icing. Much of it was preserved, Walsh explained, because it was hidden and protected for years behind dropped ceilings.

Buffalo is fortunate to have the Statler, built as a grand 1920s hotel, and the Lafayette, a generation older. Compared with the Statler, the Lafayette is intimate. It has turn-of-the-last-century nooks and crannies. They make you want to indulge in circa 1900 behavior. In one corner, by the big fireplace, a young woman was curled up with a book and a glass of wine.

Each room's decor pays tribute to a different facet of historic Buffalo. What a joy to see Room 234, home to the lone, tiny corner balcony. Stepping out on the balcony into a snowy twilight on Lafayette Square was a glorious highlight of our visit. 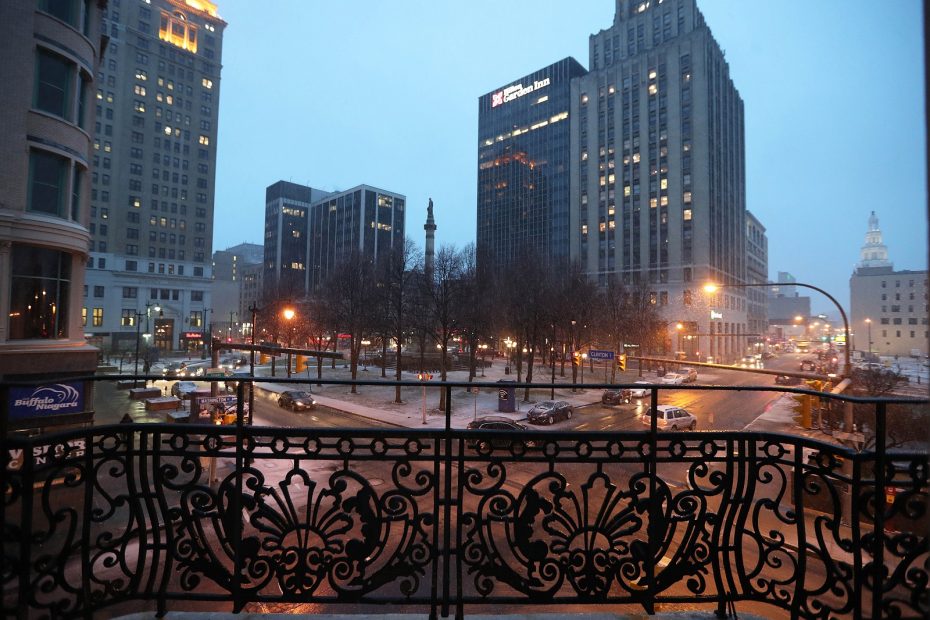 This is one of the hotel rooms on the second floor, but it is the only room that has a balcony. It overlooks Lafayette Square. (Sharon Cantillon/Buffalo News)

What a triumph that this place came full circle. It shows the proud spirit of our town.

Whoever owned the Lafayette during its lean years appeared to have cared for it, at least as far as they could afford. As bedraggled as it got,  the hotel was never stripped of its patrician features. Someone even took a stab in that woebegone era at cleaning up the historic murals behind the barroom, formal paintings that show George Washington greeting the Marquis de Lafayette. The elaborate elevator fixtures were left intact, and the telephone booths, and the ornate mail boxes, and the old front desk.

"It's amazing, much of it survived," said Walsh. "The history of the building was so colorful at times. It's so great that things survived."

As one more nod to past glories, the former Lafayette Tap Room retains its 1940s good looks. It is now the barroom of the sprawling Lafayette Brewing Co., and still looks much the same as it did. All it is missing is the buffalo head, which seems to have vanished. It will come back.