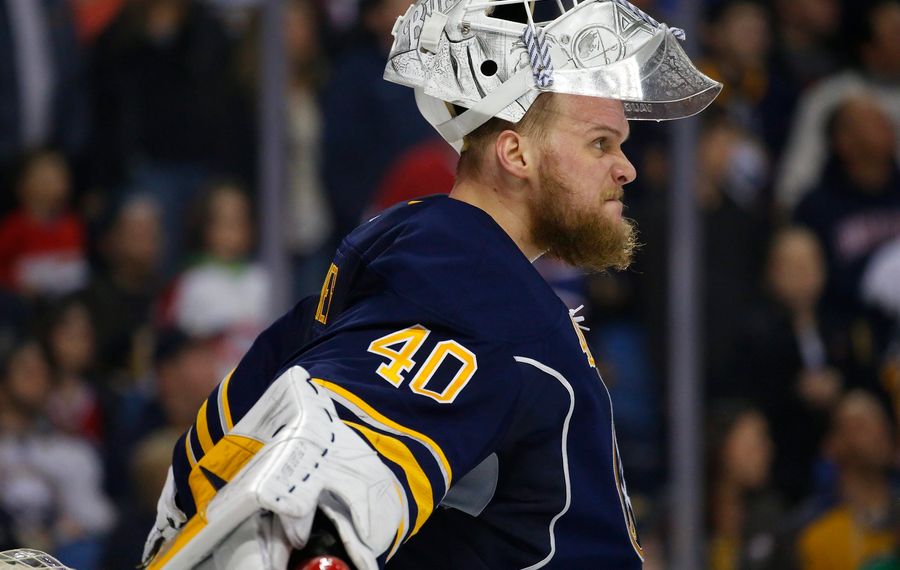 NEW YORK — After the Sabres and Rangers battled through overtime Jan. 1 in the Winter Classic at Citi Field, Rangers goalie Henrik Lundqvist took to Instagram and paid tribute to Buffalo goalie and fellow Swede Robin Lehner.

Lehner, who has known Lundqvist for roughly 15 years, was touched by the gesture.

"I saw that and it was nice, really nice," Lehner said Thursday in Madison Square Garden. "We've known each other for a long time and obviously I've followed his career. Then I popped up in North America and he saw that I was here. I started to be around him when his career was taking off. From the first year he went over from Frolunda (Lundqvist's Swedish Elite League team), he turned into a big star for Sweden and this team. It's fun how the path of us playing against each other in the game was very cool."

Lehner and Lundqvist battled here again Thursday night. Lundqvist's win over Philadelphia on Tuesday made him the first goalie in NHL history to earn 20 or more wins in his first 13 seasons, and the first in league annals to win 20 in 13 straight years at any point of his career.

Lundqvist used to work with Lehner's father, Michael, a longtime goalie coach in the Swedish League.

"I remember him and my dad working together a little bit and I remember him coming out on the ice with us when I was a little younger and he was in Frolunda," Lehner said. "He helped me out. Since he started here, I would see him in summers, goalie schools. He's always been a really classy guy. I moved over here and you catch up in summers. Sometimes in summers I've been practicing in Sweden and he's been there too.

"It was cool the way he put it on his post because it was true: I was really a young kid who couldn't stand on my skates back then. I started fairly late in hockey, around 11. I couldn't skate real well and I think it was a surprise for people that I made it here. It was really cool for two guys from the region in Sweden to make that game."

Lehner, an upcoming restricted free agent, admits he's heard his name getting more traction on the trade front with the deadline less than five weeks away. In particular, the Chicago Blackhawks have been linked to Lehner because starter Corey Crawford could miss the rest of the season due to the effects of vertigo.

"It's not that dififcult to me to play through it. At the end of the day, people have been talking about my name for quite some time now," Lehner said. "It's a business. I'm trying to do my best here this year and we havne't gotten results. We have a ways to go as a team here to get where we need to be. You don't perform and names float around. It's the nature of the beast. I feel I'm a good goalie. I have no issues with it all."

Lehner said the team needs to keep pushing out of its bye week, even thought its playoff hopes are long gone at this stage of the season.

"We have a lot to play for when you talk about this team and organization," Lehner said. "This organization gives us all the resources we need. It's a great organization in that way. At some point here, we have to start building something and getting it going. ... It's our job and we have to perform. That's what we get paid for. We have a lot to lose still in this locker room and we need to start stringing positive things together and build on our game that we've all seen in bits and pieces."

Nathan Beaulieu, who missed practice Wednesday in Buffalo, sat out Thursday's game with the flu and Casey Nelson made his season debut after being recalled from Rochester. Nelson leads the Amerks with a plus-11 rating while collecting 11 points in 37 games.

"No. 1, he's earned his right to come up here because he's played solid down in Rochester," said coach Phil Housley. "Just his puck movement, jumping up in the play, defending well. We're going to have to defend against a good team that cycles well, and see him jumping up in the play to create some things offensively. It's nothing he hasn't done down in Rochester. It's more of the same up here."

Victor Antipin skated hard Thursday morning but remained a healthy scratch. He has not played since Dec. 19 and missed several of those games due to the flu.

"He hasn't had a chance to get some really good practices in," Housley said. "Yesterday was his first solid practice with the team. He'll get worked out today and eventually he'll work his way into the lineup."

The Sabres will return to New York to meet the Rangers on March 24. This will be the first time in franchise history the Rangers will not play in Buffalo during a season. The teams' Winter Classic meeting Jan. 1 in Citi Field was a Buffalo home game and was the only one the Sabres were scheduled to have against the Rangers this season.