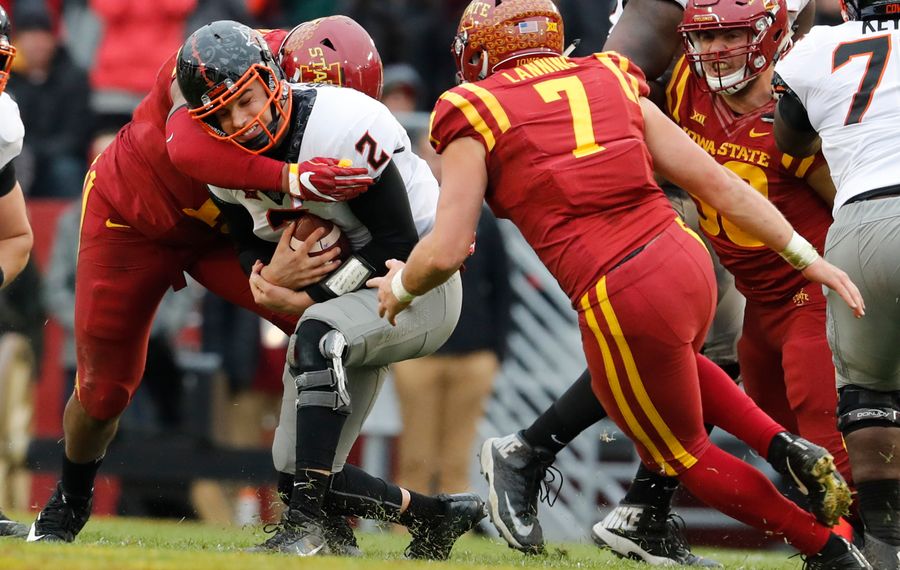 ST. PETERSBURG, Fla. – Changing positions is hardly uncommon for college players hoping to make the jump to the NFL.

Safety to linebacker? Guard to tackle? Even quarterback to wide receiver? Happens all the time.

A quarterback moving to linebacker, though? Now that’s a new one.

That’s exactly what Iowa State’s Joel Lanning is attempting to do. Lanning has the unique listing of “QB/LB” on the roster for the 93rd East-West Shrine Game, which will be played Saturday at Tropicana Field (3 p.m., NFL Network).

“Knowing his story, I was excited just to meet the kid,” West team coach Bobby Johnson said this week. “I wanted to see what this kid's all about, and he exceeds your expectations when you meet him.”

Lanning was approached by the Cyclones’ coaching staff last offseason about making the position switch, and agreed to it without hesitation.

“It shows a commitment to the team — putting the team first,” Johnson said. “In this day and age, professional athletics, that's kind of lost. That says a lot about his character, and people take notice.”

Nobody, including Lanning, could have possibly expected what a success the move would be. Lanning led the team with 110 tackles and five sacks. He also had an interception and fumble recovery. He was named a first-team All-American by the Football Writers Association of America and Phil Steele, and a second-team All-American by Sports Illustrated.

“Absolutely not,” he said of envisioning that type of production. “It's one of those things where you can't thank your coaches and teammates enough for helping you out. The extra film, the extra work after practices – I didn't do it myself.”

On offense, he converted all nine times he was called on for third- or fourth-down plays, throwing for one touchdown and running for another. It’s the first time since 2006 that a player at the FBS level had an interception, fumble recovery, rushing touchdown and passing touchdown in a single season.

He played 1,001 total snaps – 822 on defense, 128 on special teams and 51 on offense. Not surprisingly, he was named a finalist for the Lombardi Award this week, which is given to a player who has the best combination of performance, leadership, character and resiliency.

“He was revered out there in Ames,” ESPN draft analyst Mel Kiper Jr. said on a conference call Thursday. “The kid gives you everything he has. Blood, sweat, everything, he lays it all on the line. And to me, I wouldn’t be surprised at all if he got drafted late. He’s the kind of kid that with his overall versatility and love for the game and toughness, yeah, he can be another guy that’s going to help you on special teams. Versatility. If you get injured at quarterback, you could always do that in a pinch. So, yeah, I think late rounds for Lanning and it’s a great story.”

Lanning and the Cylcones beat two top-five opponents in 2017. Against No. 3 Oklahoma, he ran nine times for 35 yards and completed a pair of passes for 25 yards. Defensively, he sacked eventual Heisman Trophy winner Baker Mayfield and finished with eight total tackles.

“That's probably everybody's favorite memory, honestly,” he said. “Going into Norman and beating them there, obviously a great team win.”

Lanning said there wasn’t a particular moment that it became apparent he might have a future in the NFL.

“That was always my dream growing up, but I wasn't really thinking about it all year,” he said. “I was just trying to play ball. When agents start reaching out to you, I guess I thought, ‘ok, I'm building something. I'll have a chance, maybe.’

“When the season was over and we had some down time before the bowl game, I sat down and thought, ‘ok, I actually made something of myself. There's a lot going on in the season. You can't really sit there and think about everything, you just have to keep moving forward and try to get better every week. My teammates and myself, we gave our team a chance to win, and I gave myself a shot at getting to the next level.”

Lanning got one chance this week to play quarterback. Johnson lined him up under center for the final play of Monday’s practice. If he produced a touchdown, the defense had to do 10 pushups. If he didn’t, the offense had to. Lanning’s pass fell incomplete, meaning the offense, and Johnson, got down on the grass field at St. Petersburg High School.

“To be able to pick up multiple schemes and adjustments, a guy has to be able to understand the game,” Johnson said. “Really, I think it's a blessing that he was a quarterback. On average, they understand a little bit more of the game than most, and now he's going on the other side of the ball, which gives him a real advantage, because he's understanding what offenses are trying to do. It allows him to play faster because he can anticipate some things. I've seen that out of him this week, and you can see why his college coaches rave about him.”