It's not hard to guess the foundation Lucky Day Whiskey Bar is built on. The most noticeable change to the former Century Grill space is a wall of bottle-filled shelves behind the bar. Its bound whiskey hymnal lists 600 odes to the powers of barley, corn and peat.

When a customer reaches deep into the catalog, bartenders clamber up a ladder to snag the bottle, adding a touch of Cirque du Soleil to cocktail hour. Drinkers know they will be well served here. But what about eaters?

Turns out the acrobatics carry over to the food menu. It starts with grandpa fare like liverwurst and limburger cheese, rarely seen in such upscale surroundings, before cartwheeling into gastropub territory with dishes like sweetbreads, salmon fillet and oxtail terrine.

Dessert lands not with a banana split, but creampuffs and crème brulee. After dinner, I wanted to return but wished more dishes stuck their landings.

The wall of whiskey was one of the dreams owners Timothy and Morgan Stevens made come true in their new place, after opening the much smaller cocktail hotspot Ballyhoo near the Cobblestone District in 2014. It's one of Imbibe magazine's places to watch in 2018.

Whiskey nerds are drawn to Lucky Day like historians to the Library of Congress, intent on delving into its rare corners in search of essential knowledge. I like a nice rye Manhattan, not too sweet, and Lucky Day delivered a textbook version ($10). 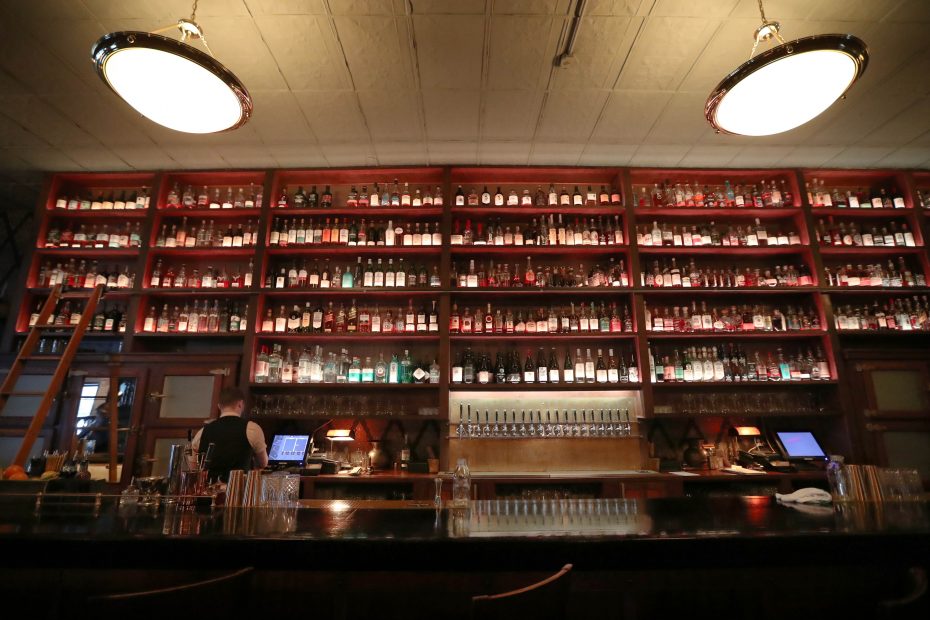 The wall of whiskey is an impressive sight at Lucky Day, 320 Pearl St. , which has been open for about six months. (Sharon Cantillon/Buffalo News)

Hunkered down at a table in one of the cubbyholes under a mezzanine seating area, the cavelike feeling was intensified with dim lighting. Combined with single-digit temperatures outside, hibernation seemed like a reasonable plan.

Then food from Chef Mitchell Fannin's menu started to arrive. Bar snacks ($6) led the way. Liverwurst, spreadable liver sausage, ought to get more respect as an accessible foie gras, but it's more rare in Buffalo than the swanky stuff. At Lucky Day it shows up in force, a serving with bread and whole-grain mustard, a generous $6 bar snack.

Limburger cheese has earned a fearsome reputation for stinkyness, but the young version filling a limburger onion sandwich was meek, with scarcely a hint of pong. Pickled herring and beet pickled hardboiled eggs round out the throwback bites lineup.

A plate of house pickles offered diced beets that had begun to ferment, banana pepper rings, sliced carrots, cauliflower and baby corn spears, a canned product whose presence I found odd but inoffensive.

A $5 Thrasher burger is a bar snack star. The beef-and-bacon patty, topped with lettuce, tomato, onion and spiced mayonnaise, was juicy.

Duck wings have joined the No Longer Exotic list, but I've never had better than Fannin's version ($12). Crispy skin and a wisp of five-spice powder hearkened back to Peking duck. A tickle of chile heat made these addictive bites indeed.

Scotch rosemary hot sauce and cucumber yogurt sauce are offered for dipping. Odd choices with Asian duck, but the bare wings were so compelling I didn’t care.

The rabbit, braised with vegetables and rosemary, was my favorite, but the rich beef was a satisfying handful as well. 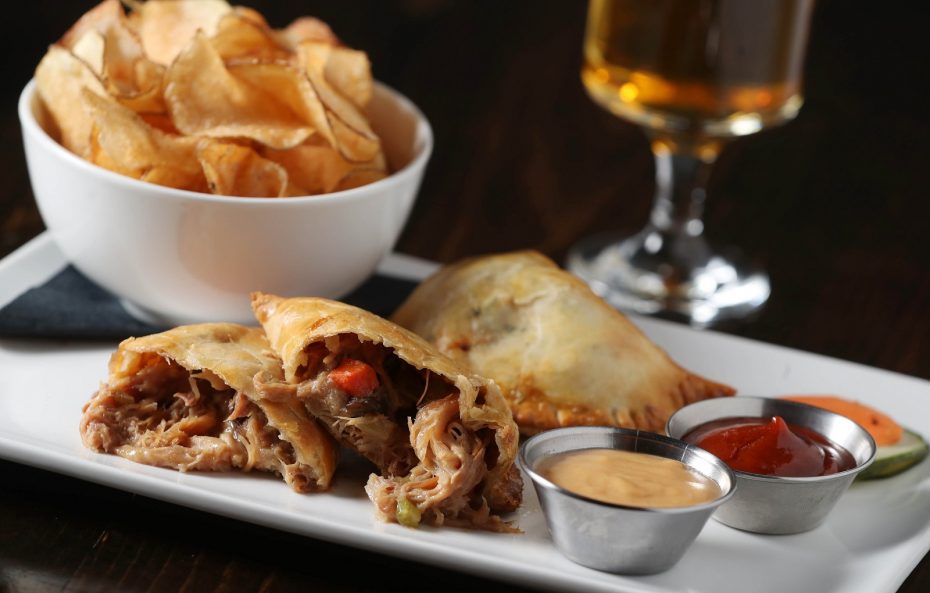 Sweetbreads ($9), three to an order, boasted a charming coat of crunchy deep-fried crumbs. If you didn’t know they were thymus glands you might have mistaken them for liver-y chicken thighs. A drizzle of spicy honey completed a spicy-sweet-salty flavor trifecta.

Cheesy polenta underneath the sweetbreads made the plate more substantial. Beet salad with olives, blue cheese and gin vinaigrette ($11) pleased with its interplay of flavors.

Roasted bone marrow ($14) was doused with demi foam that came out more like gravy, when I cannot think of a foodstuff that needs gravy less. What the unctuous beefy butter of marrow requires is bread to spread it on. The description had it; the plate did not. Questioned, our otherwise on-the-ball server said it wasn't meant to have bread. 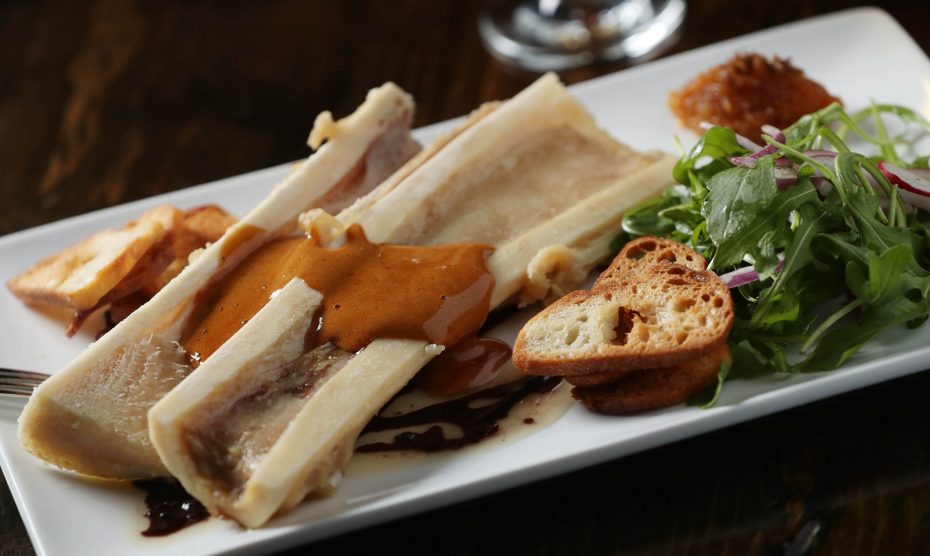 An entrée of Norwegian salmon ($21) delivered crispy skin atop dill cream and an apple slaw that played well together. But potato pancakes, overcooked outside, undercooked within, dimmed our enjoyment.

Beef rib roast ($18) arrived covered in braised kale and squash. Once we dredged out the meat, it was a decent roast, but the Roquefort gnocchi accenting it were spreadably soft, sagging under their own weight. 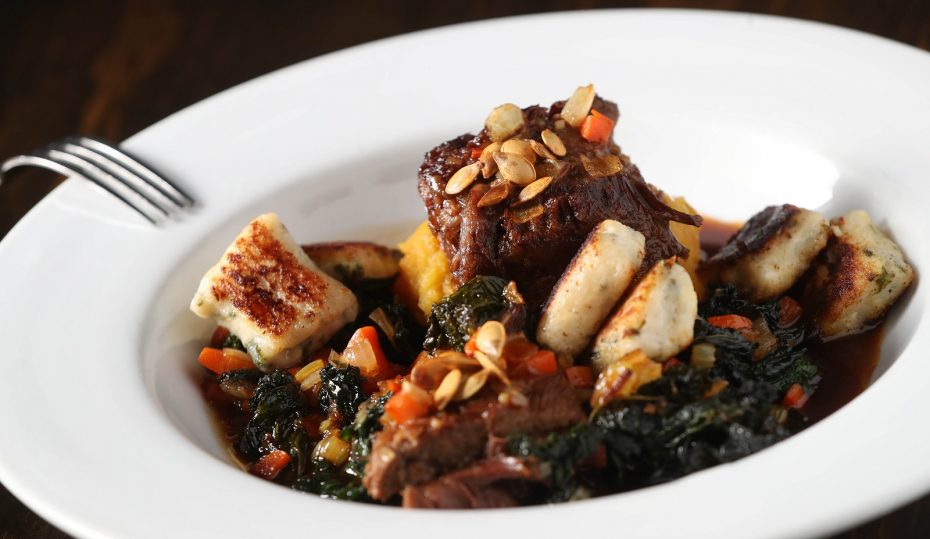 Hoping for a pleasant finish, we summoned both desserts, crème brulee ($9) and cream puffs holding milk chocolate mousse flavored with rye ($6). Creme brulee was enjoyably creamy with a crackly sugar crust. The cream puffs served up tasty cream in chewy shells that prompted the question of whether cream puffs now come in whole wheat.

If you're there to eat, I'd recommend dishes like those remarkable hand pies, duck wings and that steal of a burger. When the menu stretched for more, the risk of stumbles increased. If your goal is educational in nature – if you want to drink your fill of whiskey you've never tasted before – it's your lucky day.

At Mexico City, mole to revel in, grasshopper tacos and more