The tons of ice that have accumulated below the falls this frigid winter, in all their glittering majesty, hold a vigorous pent-up power.

Two occasions when shifting Niagara River ice proved its might will be discussed in a program Jan. 27 in DeVeaux Woods State Park. Environmental educator Carol A. Rogers will discuss the destruction of the 40-year-old Honeymoon Bridge across the gorge, brought down by ice 80 years ago, and the heartbreaking deaths of three people on a runaway ice floe just below that bridge in 1912.

The tragedy that swept a couple from Toronto and a teenager from Cleveland to their deaths in the Niagara River will include a modern retelling of their story, as an author and illustrator who married a cousin of one of the victims will sell and sign her graphic novels based on the incident.

The Honeymoon Bridge, which also was called the Upper Steel Arch Bridge and the Falls View Bridge, was built for $2 million and opened in 1898, an imposing, graceful double steel arch span, 46 feet wide and 1,240 feet long.

The bridge was designed to carry both the Great Gorge Route trolley cars and the horses and carriages of the era.

Its abutments, which can still be seen on the falls side of the Rainbow Bridge, were placed in the gorge next to the river. "If you look at them, you can see how low they were," said Rogers. "And that year, the ice was building up on it, and in the pictures, you could see the ice bending the steel. The weight of the ice just heaved the bridge down."

"The day before it fell, they closed the bridge, because they knew," said Rogers. On Jan. 27, a Thursday, crowds had gathered to keep watch, including an older man Rogers met when she started in her job with the parks 20 years ago. "He shared with me his eyewitness account of the bridge collapse," she said. "The ice just engulfed it, just pulled it down."

"Was it just the wear and tear, the weight of the train and the cars that had started using it?" said Rogers, musing on the forces that weakened the span. But whatever weakened it, she said, "It was the ice that brought it down."

Photos of the collapse showed that the bridge was intact at 4:10 p.m., and one minute later it lay on the ice in a crumpled mass. Witnesses said they first heard a low rumble, followed by the fall of the American side, then the tearing and twisting of the Canadian side, and finally the collapse of the middle of the span onto the ice, "spewing up a geyser of finely powdered ice," according to a Buffalo Evening News story.

Although the bridge stood for only 40 years, it provided a vantage point for one of the most gripping tragedies that ever unfolded at the falls, the deaths of three people who were tossed into the freezing river when the ice bridge they were standing on broke into floes that were swept into the Whirlpool.

At the Jan. 27 program, Pennsylvania author and illustrator Leda Miller, the wife of a second cousin of Burrell Hecock, who died at age 17, will discuss her graphic novel series based on her relative's life and his death in the 1912 tragedy. 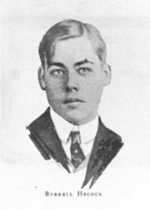 Burrell Hecock of Cleveland was one of three people killed in the ice bridge tragedy of 1912. (Courtesy of the Niagara Falls, Ont., Public Library)

Hecock, of Cleveland, along with Eldridge Stanton of Toronto and his wife, Clara Butcher Stanton, were among the thousands who flocked to the area to walk on the ice bridge that filled the area below the falls from shore to shore for weeks that frigid winter. According to the Buffalo Evening News, only about 30 people were on the ice shortly after noon on that Sunday, most clustered around two shacks that had been set up to sell refreshments.

Suddenly the ice bridge shifted with a loud crack under pressure from the build-up of ice and slush upriver.

Most of the people on the unstable ice ran for either the American or Canadian shore, and all but about six people made it. The small group stayed on the ice as it broke up and moved downriver toward the Whirlpool Rapids.

After a few moments, Michael Emendorfer of Lockport and Philip Wending of Portland, Ore., launched themselves from the pitching floes, flailing through mushy ice to the Canadian shore, where rescuers pulled them from the water, frozen and exhausted.

Finally, Hecock's companion, Ignatius Roth, also 17 and from Cleveland, took his last chance to scramble to land. He plunged into the river and managed to make the shore "more dead than alive," according to The News.

But witnesses said that as Roth fled the moving floe with Hecock, Clara Stanton cried out and Hecock turned back to assist her. "It was this act of chivalry that cost him his life," The News reported.

1912 coverage of the ice bridge tragedy that claimed three lives

Word spread quickly that people were trapped on the moving ice and police and firefighters from both Canada and the United States rushed to the scene with rescue ropes. Crowds gathered along both shores to watch in horror as the three were swept away.

"The three remained together on a large piece of ice until about midway between the falls and the Whirlpool Rapids, when the floe suddenly split, leaving Hecock on one side and Mr. and Mrs. Stanton on the other," according to the News story.

Burrell Hecock was last seen in this photo taken from one of the bridges, the small dark spot seen on the large ice floe in the Niagara River after attempting to rescue Mr. and Mrs. Eldridge Stanton. Hecock and the Stantons were stranded on ice floes when the ice bridge below the falls broke up. (Courtesy Niagara Falls, Ont., Public Library)

The ice on which Hecock was stranded moved ahead, and workers on the Michigan Central cantilever bridge yelled to attract his attention and dropped a long rope the 160 feet to the ice. Although Hecock grabbed the rope and attempted to climb it as the workers reeled it in, he fell back onto the floe, which soon overturned and pitched him into the freezing water.

Rescuers on the Lower Steel Arch Bridge lowered a rope close to the Stantons, and some reports said Eldridge Stanton caught it and made a futile attempt to tie it around his wife's waist. Other reports said the couple were last seen kneeling in prayer together as the floe capsized.

Hecock's parents traveled to Niagara Falls and his mother appealed to residents and visitors to "keep watch for the body of my boy," according to the Niagara Falls Gazette. In May, relatives of the Stantons (also called Staunton in some coverage) hired riverman Fred Preston to locate their bodies. But, according to the Tonawanda Evening News, rivermen "believe that the bodies were ground to bits by the ice cakes that swirled in the pool, and that nothing will ever be seen of the unfortunates."

The trio's bodies were never found, but they were also never forgotten.

A plaque recognizing Hecock's self-sacrifice was dedicated in October in the Glenville Congregational Church in Cleveland. It said, "His chivalrous spirit arose to the cry of distress and he lost his life while heroically trying to save others at Niagara Falls."

The Burrell Hecock Memorial Plaque on the top-level observation deck of the Hornblower Plaza on the Canadian side of the falls says, "To the Memory of Burrell Hecock of Cleveland Ohio, aged 17 years. Who lost his life in an heroic attempt to save the lives of Mr. and Mrs. Eldridge Stanton of Toronto Ontario when the ice bridge in the gorge immediately below was swept down the Niagara River and into the Whirlpool Rapids, February 4th 1912.”

After the tragedy, laws were passed on both sides of the border prohibiting the popular and hazardous practice of strolling out onto the ice bridge.

Miller, an artist and author, first heard the story of her husband Jay Miller's heroic cousin when they were dating, then sought documentation of the incident when her first child wanted to tell the family story in grade school show-and-tell. 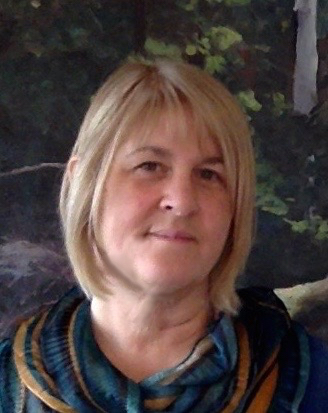 Leda Miller, who is married to a second cousin of Burrell Hecock, has written two graphic novels about the teenager who died in 1912.

In the family, she said, "The only family member who actually knew Burrell was my husband's Aunt Lottie, who shared some stories with my husband and his siblings as they grew up. But it was such an emotional event in her life that mostly she stressed what a hero he was. He was basically a normal everyday teen that was adored by his mother. He was an only child, and apparently loved by everyone in the family."

Miller has completed and printed two graphic novels in the "Hecock" series, and she is working on a third. The first tells the story of Hecock's last hour alive, she said.

"The second book takes you back to the day before, where you meet his family and get a sense of who he was and where he came from.

"In Book Three, you will travel on the midnight train to the Falls, accompany Red Hill setting up his souvenir shack on the frozen river, experience the exhilaration and the four senses of being on the ice bridge. Then you'll be led into the tragedy and some of the other people who were affected."

Hill claimed credit for saving Roth and many others after the ice bridge broke.

Rogers said the ice bridge is highly dependent on weather conditions and none formed in about six of the 20 years she has spent working in the parks office. In exceptionally cold years, she said, "There has been an ice bridge down to the Whirlpool Bridge." Other years, "One can start, and then disappear before you know it."

Rogers said she has seen photos from the 1930s showing people walking on the ice bridge. "People snuck out on the ice bridge in 1937 or 1938," she said. "But it is illegal, and they strongly discourage people, and today if you step foot out there they will know. There are cameras out there now, which is good, because it's just not safe."

After Rogers' morning program, which will run from 10 to 11:30 a.m. in the Castellani Building at DeVeaux Woods State Park, she will move to the Visitor Center in Niagara Falls State Park, where she will set up a display on the ice bridge and answer questions from 1 to 4 p.m.

Registration is required for the morning program, which is free. To sign up, call 282-5154.

The Niagara Falls Public Library, 1425 Main St., also will host a program on "the Ice Bridges of Niagara" from 6 to 8 p.m. Jan. 24. Before and after the free presentation, which will be held in the library's auditorium, those who attend may peruse a display of artifacts from the bridges that once spanned the gorge. Refreshments will be served.

In 1912, Niagara Falls ice bridge cracks, and three are swept to their deaths