“Every fishing water has its secrets. A river or a lake is not a dead thing. It has beauty and wisdom and content. And to yield up these mysteries it must be fished with more than hooks and for more than fish. Strange things happen to the inquiring fisherman. Nature meets him halfway on his adventure. He must have eyes that see. One fisherman may have keener eyes than another, but no one fisherman’s observation is enough.”  -- Zane Grey, Famed Western novelist and avid outdoorsman

It’s important to be a student of the outdoors, always willing to learn with every cast, every step. And as you collect that knowledge and store it away for that right set of circumstances, it can lead you to rewarding experiences that can also push to further life lessons.

Last Thursday, record-breaking temperatures soared into the 60s. Capt. Frank Campbell of Niagara Region Charters called the night before to say outdoor writer Rick Henniger, editor with Ohio’s Fish and Field Report, would be arriving in the morning for a quick in-and-out lower Niagara River fishing adventure with his son Jason. He wanted to catch some trout. I was invited along.

The Fishing Beat
Scattershot: Big names to offer insights at fishing expo
Catches of the Week
Outdoors Calendar
A frigid reminder that ice fishermen are a special breed

The water was green but not clear. It appeared as though the stain would slowly increase as the day went on due to excessive run-off from the melting snow and rain. The wind was blowing out of the south and Campbell had one thing on his mind as we headed north from the Lewiston Landing launch – a “secret” spot of sorts (as secret as you can keep something in a place as popular as the Niagara).

We were at a bit of a disadvantage. The local tackle shop was closed so there were no minnows for this particular day. Instead we would have to run wobbling baits like MagLips and Kwikfish lures off three-way rigs, bouncing bottom in 15 to 30 feet of water. For the MagLips, we ran 2.5 and 3.0 sizes, Kwikfish were K8 and K9. Silver and gold colors both worked.

Campbell was the first to hit a fish, running a gold MagLip back significantly further than our offerings – probably double the distance. It proved to be a nice brown trout around 10 pounds. After fighting the fish and taking a few quick photos, we ran back up to take another drift. Bam! Campbell had another on, same lure and same approach.

“Several years ago I found that brown trout like to hang out in this area of the river,” said Campbell. “This is where I caught the 31-pound brown with Bob Klemm last March.” However, Campbell wasn’t using a three-way rig set-up or casting any kind of lure for that wall-hanger. He tried something unconventional.

“I think these bigger browns will become a little more aggressive when the water is stained. They can be both line shy and boat shy, especially when they will also move into shallower water 10 feet or less. Finding the right bait to entice them to hit is the trick. Minnows or shiners seem to trigger them to feed.” 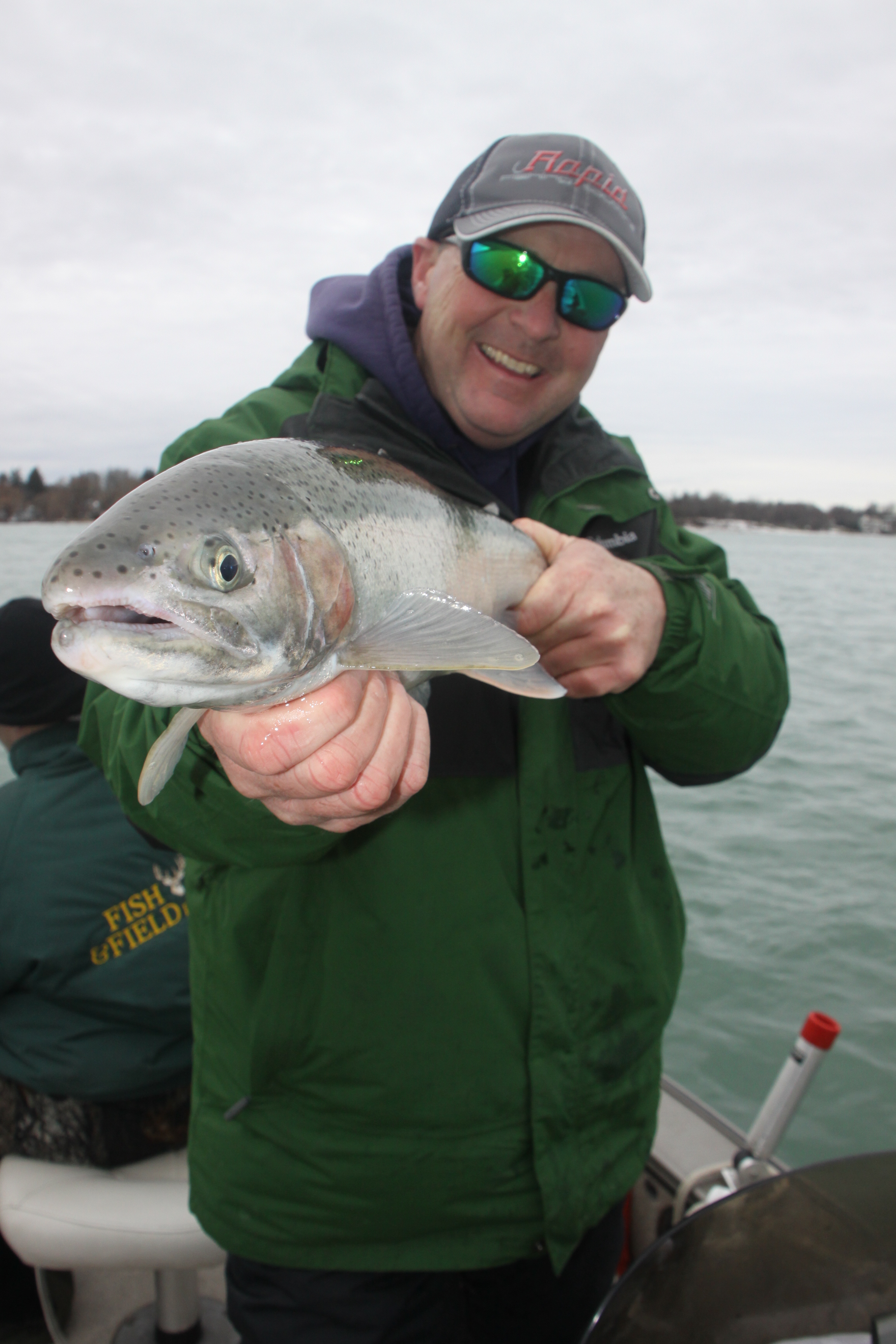 Capt. Frank Campbell with a steelhead from the lower river.

Using an extra rod, Campbell rigged up a minnow with no weight on the line to give it a more natural presentation and away from the other rods. He was careful to use 8-pound test Seaguar Fluorocarbon line and a No. 8 Gamakatsu hook. “You can’t use too big of a hook because you want the baitfish to swim as naturally as possible.”

“Another key for me is to run a rod with a softer tip,” he explained. “My go-to rod is a Lew’s 7-foot medium light action rod. My reel is a Lew’s BB1 Pro Speed Spool baitcaster that has an excellent drag system. You need that combination, especially for the bigger fish.”

“You can also experiment with different bait colors by using things like Pautzke Fire Dye,” said Campbell. “I will dye my minnows while they are still alive and that can make a difference in whether or not I catch fish … and how many.”

As we reminisced on Klemm’s impressive trophy, father and son Henniger were finally getting the hang of this approach. We all lost fish initially but as we duplicated the drift and developed a feel for the process, it wasn’t long before we were pulling at least one fish on every drift. Jason managed to catch not only his first brown trout but also his first steelhead of his life – memorable on a number of levels. While the water was 32.4 degrees, the air temperatures were still in the 50s. We caught both browns and steelhead in the double-digit pound range and we figured out exactly what the fish wanted. Okay, maybe no “we.” Frank figured it out, but he passed that information along and shared it with the three of us. In three hours of fishing we caught a dozen nice trout. 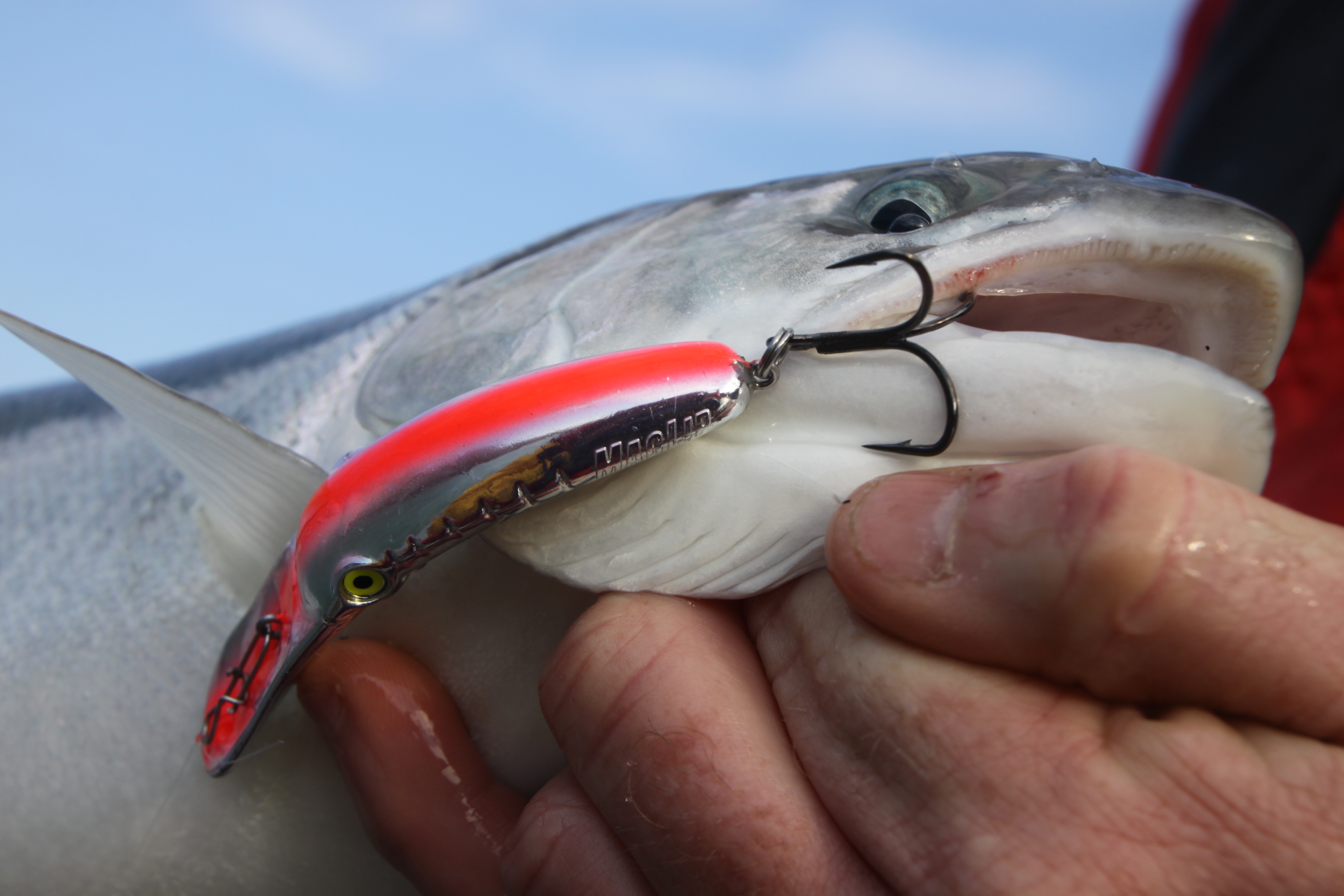 The MagLip has come to be a hot bait on the Niagara. Yakima Bait will have a booth at the Fishing Expo this weekend.

“I think we would have done better if we had minnows,” insisted Campbell.

This is a perfect segue into the Greater Niagara Fishing and Outdoor Expo this weekend at the Conference and Event Center Niagara Falls Jan. 19-21. Campbell is one of the featured speakers. He is also offering on-water educational lessons from Thursday to Monday that  includes a pass for the Expo and an in-depth classroom clinic that will answer all of your questions. Give him a call to sign up at (716) 523-0013. He has a handful of captains that will be helping him give instruction on the water.

The Niagara Fishing Expo (www.niagarafishingexpo.com) is filled with this kind of knowledge – information you can take to the (fishing) bank or out on a boat. With over 70 speakers, 120 seminars and 150 exhibitors, there’s a little bit of everything freshwater fishing-wise. Take advantage of one of the best freshwater multi-species fisheries on the planet, all right in our own back yard of Western New York. Don’t be afraid to do your own exploring and experimenting. This will just help to get you started.

“When it comes to luck you make your own.” – Bruce Springsteen, Lucky Town

“There’s still time to change the road you are on.” – Led Zeppelin, Stairway to Heaven