Rep. Chris Collins of Clarence introduced a bill that would create a national registry of communications infrastructure that would be able to spot the rural areas that are most in need of better broadband service.

Rep. Tom Reed of Corning joined other members of the bipartisan Problem Solvers Caucus in releasing a report that suggests several new federal efforts to expand high-speed Internet service in the hinterlands.

Collins' proposal is further along in the legislative process than Reed's. The Collins bill is a part of a package of measures offered by members of the House Energy and Commerce Committee to address inadequate broadband service in rural areas.

“It is almost unbelievable to think that approximately 65 percent of my district is under-served by broadband technology and about 3 percent is completely unserved,” Collins said. “Broadband access is important to our rural communities as our reliance on the internet continues to grow for education, starting and administrating a business, receiving care from a doctor, or just plain shopping.”

Collins said his bill would help expand rural broadband service by improving coordination between governments and internet service providers. The bill would identify infrastructure that could be leased in order to expand service. 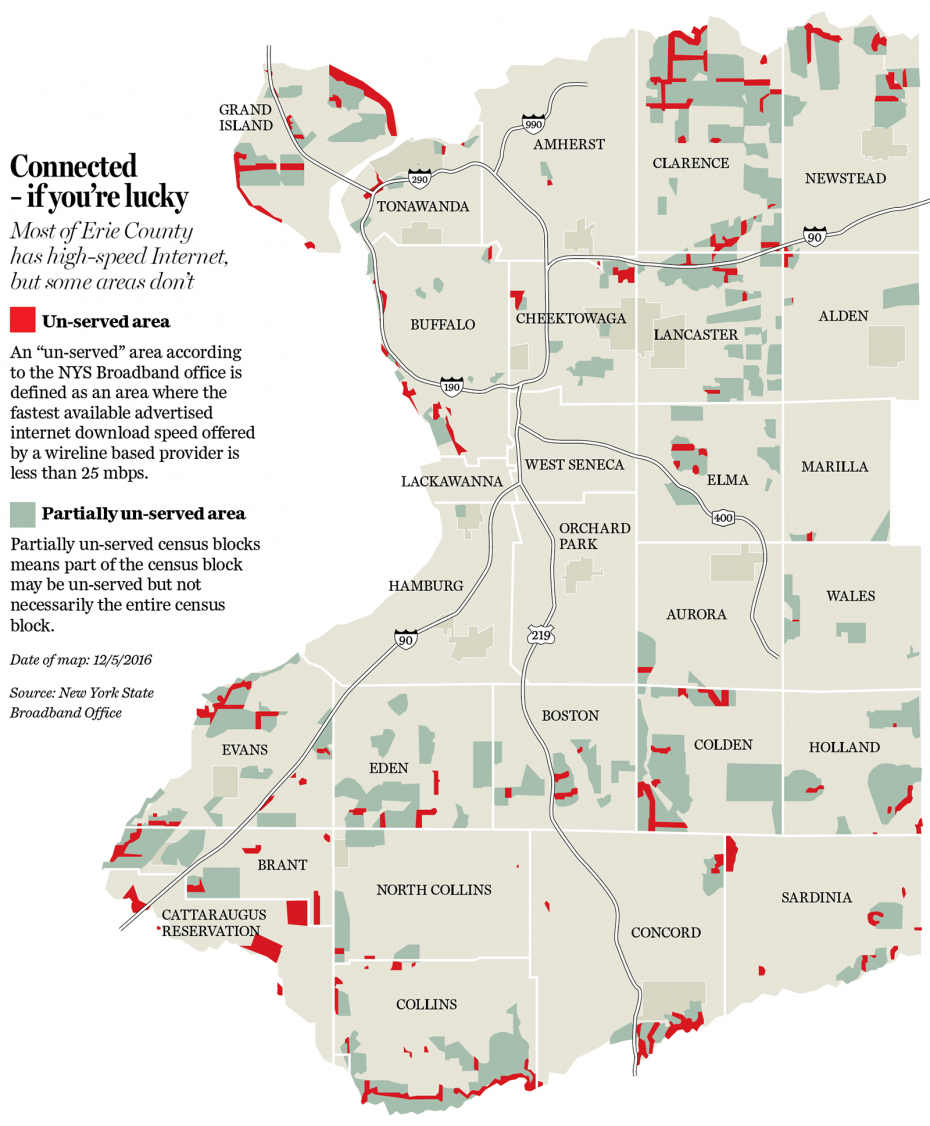 The lack of broadband service isn't just a rural issue. A map of Erie County, prepared in December 2016 by the New York State Broadband Office, shows that parts of census tracts in South Buffalo, the far West Side and the East Side didn't have modern high-speed internet service. Similar broadband-free zones could be found in every other town in Erie County except for West Seneca and Orchard Park.

“We need to think about things like public safety, making sure law enforcement has the ability to receive notification of an emergency and quickly respond," he said. "Our communities need broadband internet access to stay connected, and I am confident we are taking steps in the right direction.”

The Problem Solvers Caucus – which Reed co-chairs – suggests increased investment in broadband in its report outlining a comprehensive approach to improving the nation's infrastructure.

The proposal would boost funding for rural broadband projects, create incentives for "dig once" policies that would lay conduits for fiber-optic cables as part of federally funded highway projects, and extend federal "Smart Cities Challenge" to encourage the use of modern technologies in public works.

The Problem Solvers proposal also includes ideas on improving federal investments in highways, water systems and the power grid. Reed said he hopes ideas from the plan will be included in comprehensive infrastructure legislation that Congress may consider this year.