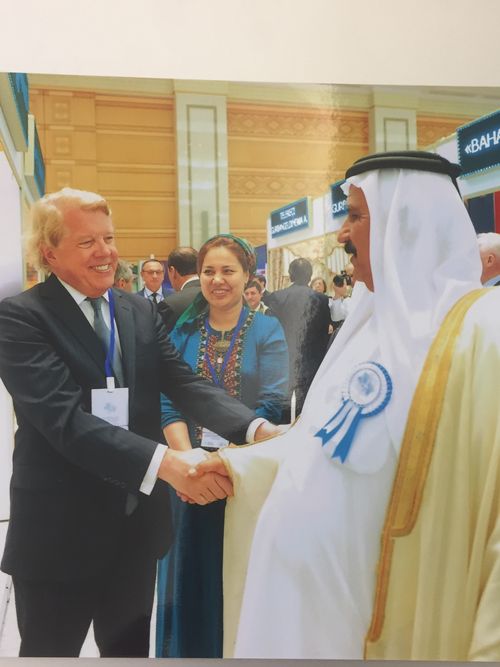 Vincent M. Gaughan Jr. had noticed that something was missing during his first decade of doing business in Russia and the former Soviet republics. There were no golf courses.

“He thought this might be an opportunity,” said his younger brother, Kevin Gaughan, an attorney and government reform advocate. “He always admired Jack Nicklaus, so he wrote him a letter and the letter led to a meeting.”

That resulted in a joint venture in 2004 with Nicklaus and his global golf course design company, to develop golf courses and surrounding real estate in Russia and 22 other countries.

As president of Nicklaus Design East, he helped establish in Russia two of the company’s largest golf course developments.

In 2016, he was named director of Nicklaus Project Management.

When Mr. Gaughan died unexpectedly last Thursday in Ashgabat, Turkmenistan, he was overseeing final details for the Ashgabat Golf Club, that nation’s first golf course, which debuted in October. He was 65.

“It was my brother’s idea to even approach them,” Kevin Gaughan said. “He got through into the palace and talked them into building a golf course. That was his genius.”

“Vincent was a tremendous representative of our company,” Jack Nicklaus said. “It was through Vincent’s efforts and persistence that we were able to introduce Nicklaus golf, and golf in general, to new markets around the world. And outside of work, I always enjoyed my time with Vincent. We had great fun together.”

“Vincent was an exceptional man,” said John Reese, chief executive officer of Nicklaus Companies. “He combined a wonderful manner with a fierce drive to achieve what most people could not even think of achieving.”

His brother Kevin Gaughan said that at the time of his death, Mr. Gaughan had begun negotiations on another major golf course project in Qatar. In the photo, he is greeting Hassan Abdullah Al Adhab, Ambassador of the United Arab Emirates in Turkmenistan, at an event in Turkmenistan.

Vincent Michael Gaughan Jr. was born in Buffalo, the fourth of seven children. His father, Vincent Sr., was an attorney who served as special assistant to President John F. Kennedy. As a boy, he traveled extensively with his father.

He was a graduate of Canisius High School, where he played basketball and baseball. After earning a bachelor’s degree from Georgetown University, he received his law degree from Fordham University Law School and a master’s degree in business administration from Babson College.

After law school, he served as an assistant Erie County district attorney and later worked as a licensed stockbroker for Merrill Lynch.

“My brother and my father shared an immense curiosity about the world,” Kevin Gaughan said. “When the Soviet system collapsed, they turned to each other and said we’ve got to see this for ourselves. My brother thought that it would be a fabulous market for entrepreneurs.”

Mr. Gaughan and his father toured Russia and, in 1993, Vincent Gaughan became the first and only American attorney to be appointed to a Committee of the Supreme Soviet of the Russian Federation.

Named counsel to the Inter-Republic Trade Committee, he helped create the trade regulations that govern commerce among the newly independent former Soviet republics.

In 1998, he founded the Bering Group, which acted as a liaison in setting up ventures among foreign companies, investors and the Russian public and private sectors. It also provided market analysis to start-up companies in East Asia.

He became co-founder and partner in 2013 in Macro-Advisory, a Moscow-based consulting service for companies and investors who want to do business in Russia and Central Asia.

His activities took him around the world.

“His ventures required immense energy and quite a bit of courage,” Kevin Gaughan said. “He was always on the move, but always with a purpose. He always said you couldn’t understand a business or a nation or a person unless you looked them in the eye.”

Mr. Gaughan met his partner, Katerina "Katya" Gavrilova, a Russian woman involved in the sporting goods business, about 10 years ago at a trade association gathering in Moscow. In recent years, when he wasn’t traveling, he made his home in the Russian capital.

In addition to his partner and brother, survivors include a daughter, Zlataslava “Alexs”; five sisters, Karen Scott, Judith Warren, Colleen Walsh, Shannon Bowman and Patricia Burke; and many nieces and nephews.