The misnomer “global warming hiatus” got its start from the oceans’ taking care of warming — to some extent — for those of us on land. It’s a misnomer because global warming never really slowed down, and it certainly didn’t stop. 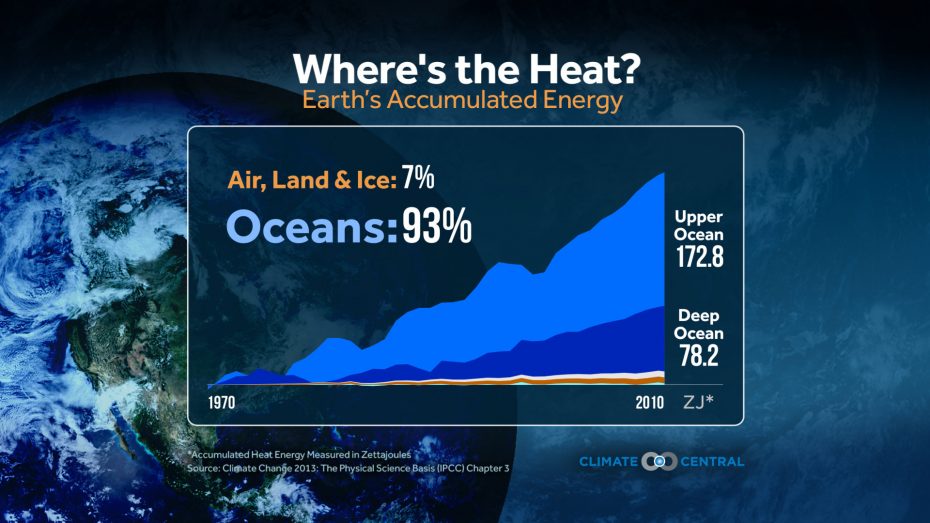 From the 1998 El Niño until 2013, the rate of warming on land slowed significantly. However, the rate of warming in the upper oceans increased, as there was some underestimation of the oceans’ ability to absorb heat, or to act as a heat “sink.” About 90 percent of the ongoing warming that has continued during the last 50 years has been occurring in the sea, according to NOAA data showcased in the chart at right.

The warming is never linear, especially over land. Despite humankind’s influence in driving the warming, there are still elements of natural variability that can slow or increase the warming for periods of a few years. The oceanic warming is a little more consistent, but it still doesn’t follow a nice, smooth curve. For example, events such as the recent record strength El Niño can release vast stores of heat back into the atmosphere.

So, the oceans’ role as a heat sink and some natural variability may have cut us some slack on land for around 15 years, but warming on land has resumed since and strengthened beyond previous levels since 2013 in the global mean.

What happens in the oceans during warming is most definitely not good. Oxygen levels drop significantly. A paper published in Science magazine explains the problem in coastal zones is worsened by the nutrient load flowing from farmlands’ fertilizer runoff along with treated sewage, which speeds deoxygenation. In open global oceans, most of the oxygen loss is tied to warming from the greenhouse gas load increase.

Oceanographers have data that shows this deoxygenation has been occurring and increasing for at least 50 years. Click here to see a map outlining the varying degrees of oxygen depletion around the globe from the Smithsonian Tropical Research Institute.

This hypoxia is most acute where nutrient runoff is occurring; for example, near the mouth of the Mississippi, or in the western, shallower portion of Lake Erie with Ohio agricultural runoff. This particular problem has been long known and is not only a reflection of our tremendous agricultural productivity, but also the flow of treated sewage into waterways and coastal zones.

However, the role of ocean warming is playing an increasing role in upper ocean and coastal zone hypoxia over far greater areal coverage. The Science magazine paper reports low oxygen levels have expanded by several million square kilometers, and the expansion is accelerating.

Oxygen is vital to biodiversity for both plant and fish life. The hypoxia has already had a devastating impact on coral reefs and can reduce fish reproduction and populations. Rising ocean temperatures due to the warming climate reduce oxygen solubility in the oceans, reduce oxygen levels through increased respiration and are predicted/modeled to reduce reintroduction of atmospheric oxygen into the waters, due to a stratification of ocean layers and a weakening of the mixing/turnover conveyor currents in the seas.

The mechanisms behind increasing hypoxia in the seas are tied to human activity, both for the warming waters and the increased nutrient overload. The latter is an especially complex problem beyond the scope of this article. No one can argue against treating our sewage. And no one can argue against high agricultural productivity.

Still, I have been seeing mainstream-source articles that suggest our methodology and energy use for raising livestock, along with consumer demand for certain products, exacerbates both the warming and runoff problems. About 40 percent of our incredible corn crop now goes into the manufacturing of ethanol for gasoline. We clearly have some tough technological nuts to crack here. The rate of progress in dealing with these problems does seem to be speeding up, though not nearly fast enough — yet — to slow these worsening, global scale impacts.