Brian Daboll's coaching history suggests he will know what to do with a franchise-caliber quarterbacking talent, should the Buffalo Bills acquire one.

The new Bills' offensive coordinator was part of the gold-standard NFL passing offense in his most recent stint as a New England Patriots assistant from 2013 to 2016. That makes him well-versed in the precision, possession passing game, which all of football recognizes is directed at the highest level by Patriots QB Tom Brady.

By hiring the 42-year-old Daboll, one has to conclude that's what the Bills are shooting for – eventually – from a scheme standpoint.

The best defenses in the NFL are loaded with phenomenal edge-rushing athletes. In general, there is more elite athleticism and depth on NFL defensive lines than on offensive lines. Exotic blitz schemes only make it harder for teams to protect the passer.

That's why elite passers who can operate an underneath, short-area, horizontal passing attack tend to better manage disruptive defensive fronts and elevate their teams. Brady, Ben Roethlisberger, Drew Brees, Aaron Rodgers and recently retired Peyton Manning have dominated for more than a decade.

Can Daboll and the Bills operate an effective precision passing attack right away? We have to wait to see who winds up playing quarterback for the Bills in 2018.

But when the Bills get the kind of QB they want, look for Daboll to emulate a lot of staples from the Patriots' passing attack (which lots of teams use; the Pats just do most of them better). Those include:

From a run-game standpoint, Daboll's history suggests he will favor a power running scheme over the outside zone scheme that former coordinator Rick Dennison aimed to employ in 2017.

The Patriots have favored a power scheme, with guards pulling and a fullback or tight end leading at the point of attack. They run a lot of inside zones, too. They don't "major" in outside zone running but it's part of the package. That scheme fits the current Bills' personnel better and essentially is what the Bills turned to more the last two-thirds of the past season. When the Bills wanted to go outside as the season wore on, they did it with more gap-scheme runs.

Run-pass versatility is another fundamental principle of the Pats' offense, in part because of the presence of All-Pro tight end Rob Gronkowski.

The Pats are among the league-leaders in use of "12" personnel (two tight ends, two receivers and one back). If defenses respond with "lighter" nickel personnel, the Patriots run the ball. (This is how the Pats rumbled past the Bills in Buffalo this season.) If defenses stay in regular, it's a green light to pass. Naturally, most NFL teams try to do the same thing. (Buffalo used 12 personnel about 20 percent of plays this season.)

So Daboll's presence no doubt is good news for tight ends, presuming he likes the tight-end talent.

"I think that one of the most important things that you can do as a coach is to really try to put your players in positions where they do things very, very well,” Daboll said last spring after being hired by Alabama. “I’m not one to just have one play and this is how we’re going to run it. Sometimes that doesn’t fit with the players that you have." 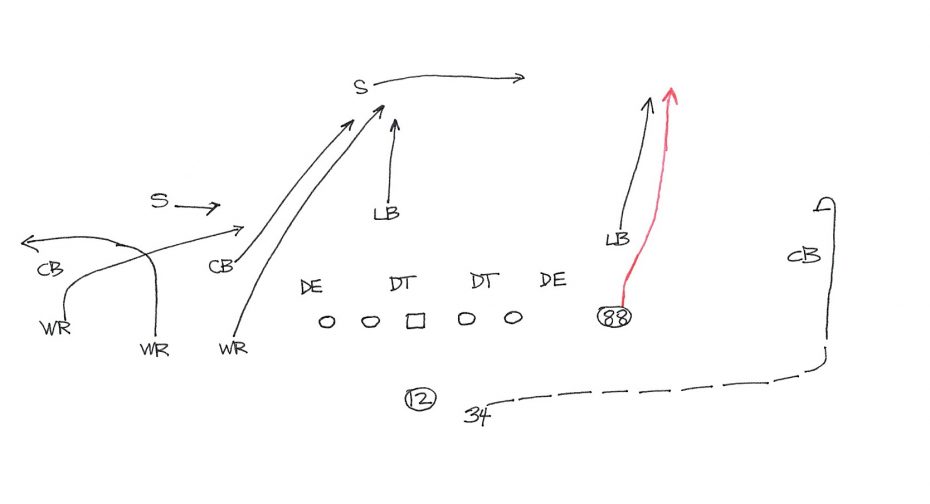 This is a spread-empty look New England used to get a pass interference penalty against Martellus Bennett (88) in the Super Bowl last year. Running back James White (34) went in motion, creating a three-receiver route to the left and a two-man route to the right. Brady picked the best matchup, with Bennett facing man coverage against a linebacker.

As coordinator at Alabama this season, Daboll ran gap scheme, inside zone and quite a bit of outside zone. The Crimson Tide, benefiting from a distinct physical advantage up front most games, ran on 65 percent of their offensive plays.

Alabama ran a pro-style attack but relied heavily on the athleticism of quarterback Jalen Hurts. If his first and second passing options were covered, Hurts usually was taking off and running. Hurts was the No. 2 runner on the team, with 855 rushing yards.

Hurts is such a threat, 'Bama could fake read-option runs up the middle and hand off for outside zone runs around end. Daboll also incorporated run-pass option plays at 'Bama, sometimes with Hurts electing not to hand off and throwing a quick swing pass to his running back, if the defense was over-playing the handoff inside. That's a play more often seen in college. A standard run-pass option in the NFL has the pass going on a receiver screen if the ball is not handed off to the running back.

As Daboll's resume suggests, he's not a miracle worker. When he had subpar talent, he got subpar results. In Kansas City, his Chiefs offense was 32nd in scoring in 2012. His 2011 Dolphins were 20th in scoring.

"You look at teams, for the most part percentage-wise that have been successful over the years, one word I think is sometimes overlooked is continuity," Daboll said upon being hired in Kansas City five years ago. "When you can have a system in play and you understand that your players are going to be in that system and they understand their roles, that gives you a little bit of a jump start."