The clock in the upper-right corner of the Buffalo Sabres' television truck hits 6:28:30 p.m., and the call goes out to dozens of earpieces inside and outside the Sabres' arena.

The Sabres' broadcast is on the air in living rooms and bars across the country. Longtime fans and viewers welcome Rick Jeanneret into their home, a place he's visited so often that he seems like part of the family.

Jeanneret has a television family of his own. It's a big one, a group of men and women who crack jokes, write facts, spin the rewind dial and match music to graphics.

More than 30 people put together Buffalo's game broadcasts, which annually rank among the NHL's most watched. Only a handful of the workers appear on television. The rest make sure the on-air talent looks good and sounds smart.

The Buffalo News entered the world of the broadcast crew Thursday when the Sabres hosted Columbus. The morning meeting was a mixture of frat-house hilarity and hockey knowledge. The production truck was 64 feet of sensory overload, an insulated tractor trailer with wall-to-wall monitors and nonstop chatter.

"It's organized chaos," Pinter said. "It's a little overwhelming if you've never been in there before."

Thankfully for viewers, the regulars are far from overwhelmed. There are decades upon decades of experience behind the production. It helps create a broadcast that integrates the sights, sounds and numbers of hockey.

The goal is to put out a good show even if it's a bad game. It takes more than 12 hours of work, and the energy rises when the on-ice product gets intense.

"I tell people all the time, 'I feel like I played a game,'" Grossman said. "It's nonstop, and we don't get a shift change."

In fact, it's busier when there's a pause by the players. Multiple conversations are conducted at once. Numerous replay packages are produced. Pinter is pondering when to look back at the action, when to move forward with a promotional ad and telling the announcers his plan.

"Live sports television is amazing because everything is different every day," Pinter said. "It's never the same. There's no script that you can follow to cookie-cut anything. It's just all reacting to what happens."

The entertainment begins early on game days. After the players have their morning skate and meet the media, the broadcast crew holds a production meeting. It's 50 percent business and 50 percent razzing, though the scales may be tipped toward the latter.

The objective is to plan the 30 minutes of airtime for the pregame show.

As Pinter chats with Dunleavy about which player the announcer will interview, Ray rips on studio analyst Martin Biron. The former goaltender returns the jabs. Duff and Chris Ryndak, the content marketing manager who works on the Sabres' website, chime in with laughs and observations.

Two topics were at the forefront of Sabreland on Thursday morning. Coach Phil Housley had just berated the players for cheating offensively and caring more about stats that winning. A practice confrontation involving Evander Kane and Justin Falk followed Housley's talk. The broadcast can't ignore either situation despite being a team-owned entity that wants to make the Sabres look good.

Biron comes up with a way to handle Housley's talk. He recalls the sixth goal in Buffalo's 7-4 loss to Winnipeg as illustrating the coach's cheating message. During the pregame, Biron will use a telestrator to show what Housley saw. The announcer stresses the clip is a lesson rather than an embarrassing moment.

From there, they move on to the practice scuffle. Few players in NHL history have had more fights than Ray, and he's quizzed on locker-room confrontations. It's an animated walk down memory lane, but not much is suitable for a family show. Ultimately, Ray will leave out specifics but talk about how similar incidents can affect a locker room.

The meeting ends with more teasing directed at Pinter.

Pinter will have the rest of the day to prove it. He heads to his office to write the commercials and Sabres-related promotional ads that Jeanneret reads over the air.

Pinter joins his co-workers in the truck during the afternoon. That's when the fun really starts.

An intriguing thing about the massive, technologically advanced production truck is it's not permanent or Sabres property. A New Hampshire-based company called Game Creek Video supplies teams and networks with the mobile unit. Every time it arrives, the crew – which is mostly from the Buffalo chapter of the National Association of Broadcast Employees and Technicians – starts from scratch.

Workers unload cameras. Miles and miles of wire is unfurled and run through the arena. Technicians bring hard drives of previous broadcasts into the truck in preparation for vignettes and highlight packages. Audio files are uploaded.

It's an all-day affair.

There are more than a dozen cameras set up in the arena, and each feeds back to its own monitor on a wall in the truck. At any given moment, viewers can be watching a stationary camera from the 200 Level, a handheld camera at ice level or a robotic camera looking down from the scoreboard. 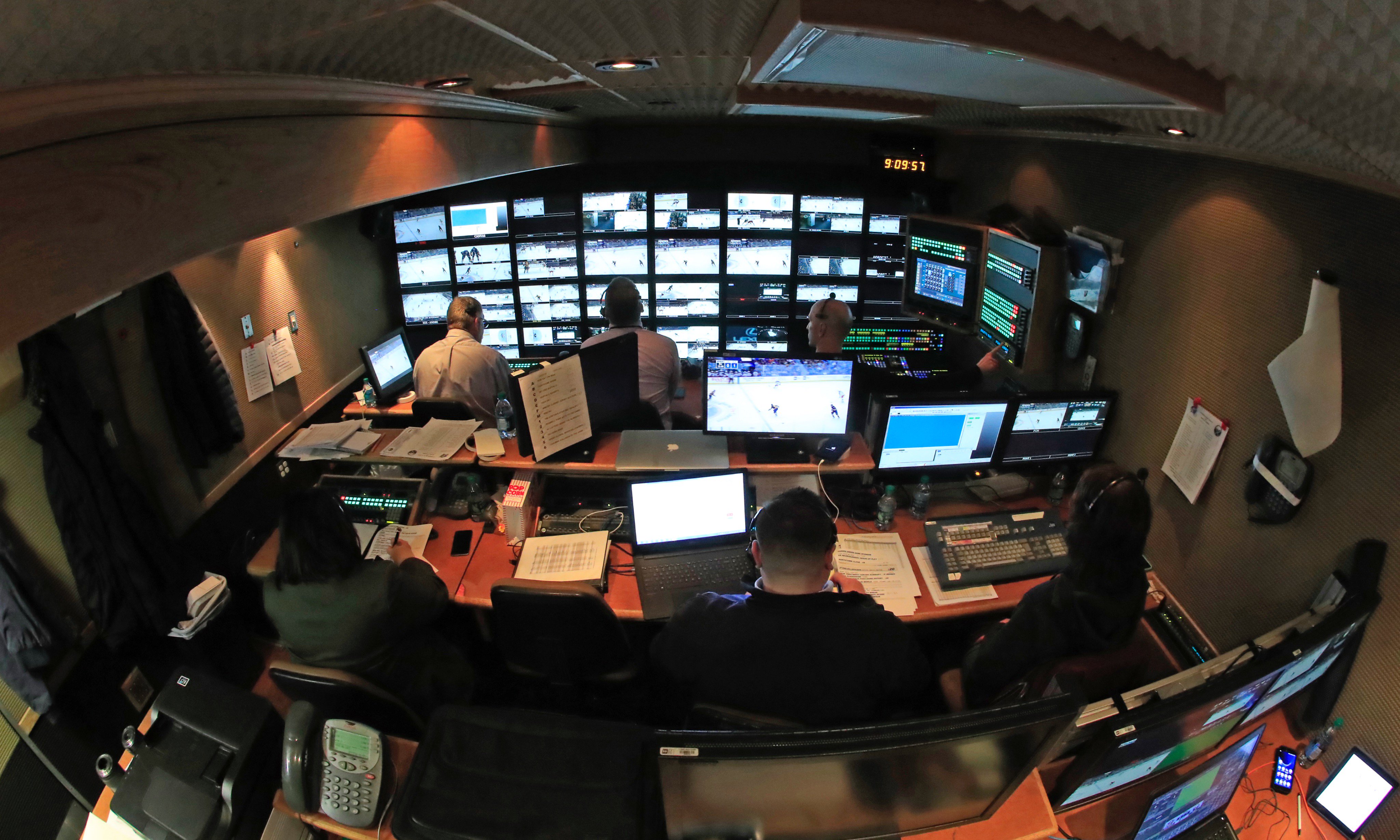 While the game is live, it's up to Grossman to decide which works best. The director's optimal shot is a bird's-eye view, allowing people to see more of the ice for breakouts, rushes and turnovers, so the 200 Level camera is used primarily. But when the puck goes into the corner or a scuffle happens near the bench, it's time to switch.

"You want to mix it up, bring the viewer closer to the action," Grossman said. "You want to see the players' faces and see the action up close, especially when they're battling for a puck."

When he wants to switch, Grossman says, "Camera Four," into his headset. Seated next to him at a board with approximately 150 buttons is Michael Buttino, the technical director. He hits one of the buttons, and a different camera takes over the broadcast.

Too many switches can make the viewer dizzy. Use the wrong camera and they miss the action.

"I watch the rebroadcast and nitpick and critique myself all the time even after doing it for 20, 25 years," Grossman said. "It's just little things with different views and different angles."

While Grossman is handling the live action, one of Pinter's duties is scanning all the cameras for moments with replay potential. When the producer sees something, he talks to the four replay operators in the middle of the truck.

A diagram of a production truck supplied by Game Creek Video.

Each operator mans a replay machine that pulls from four or more cameras. They turn a knob to rewind their feed and pause it at the required moment. When play stops, Pinter tells Buttino to go to "Z" or "X" for the best replay. When the button is hit, the replay and broadcast pick up at the spot where the operator hit pause.

When the Sabres' Kyle Okposo scored during the third period, the four replay dials were spinning rapidly. The order in which the clips were used was part instinct for Pinter, part sales job by the operators. One says there will be a hero shot on "B." Another says "Z" is ready.

There's definitely a trust factor involved. If Pinter didn't see the camera angles himself, he has to assume there really is a quality celebration on "B" when he orders it to air.

Considering two of the operators, Andre Nacov and John DeTolla, received 30-year pins Thursday, the trust is there.

"That experience is irreplaceable," Pinter said. "Having experienced, knowledgeable and qualified people on the crew is what separates broadcasts."

As Linus Ullmark made save after save during the second period, it became clear this was the goaltender's night. A tag-team effort illustrated that for the viewers.

Replay operator Dan Bellis, who joins Pinter, Grossman and Wiese at road games, went to work on a highlight package of Ullmark's top stops. Wiese, the production manager, looked at his laptop for the live game stats and asked graphics operator Alicia Thiers to create a box with Ullmark's numbers and his accomplishments in Rochester.

When those tasks were finished, Pinter pressed the button connecting him to Jeanneret's headset. Pinter told the announcer that the clips and graphic were coming at the next whistle. When the whistle came, Jeanneret was ready with a smooth segue into Ullmark's night that matched what was appearing on the screen. 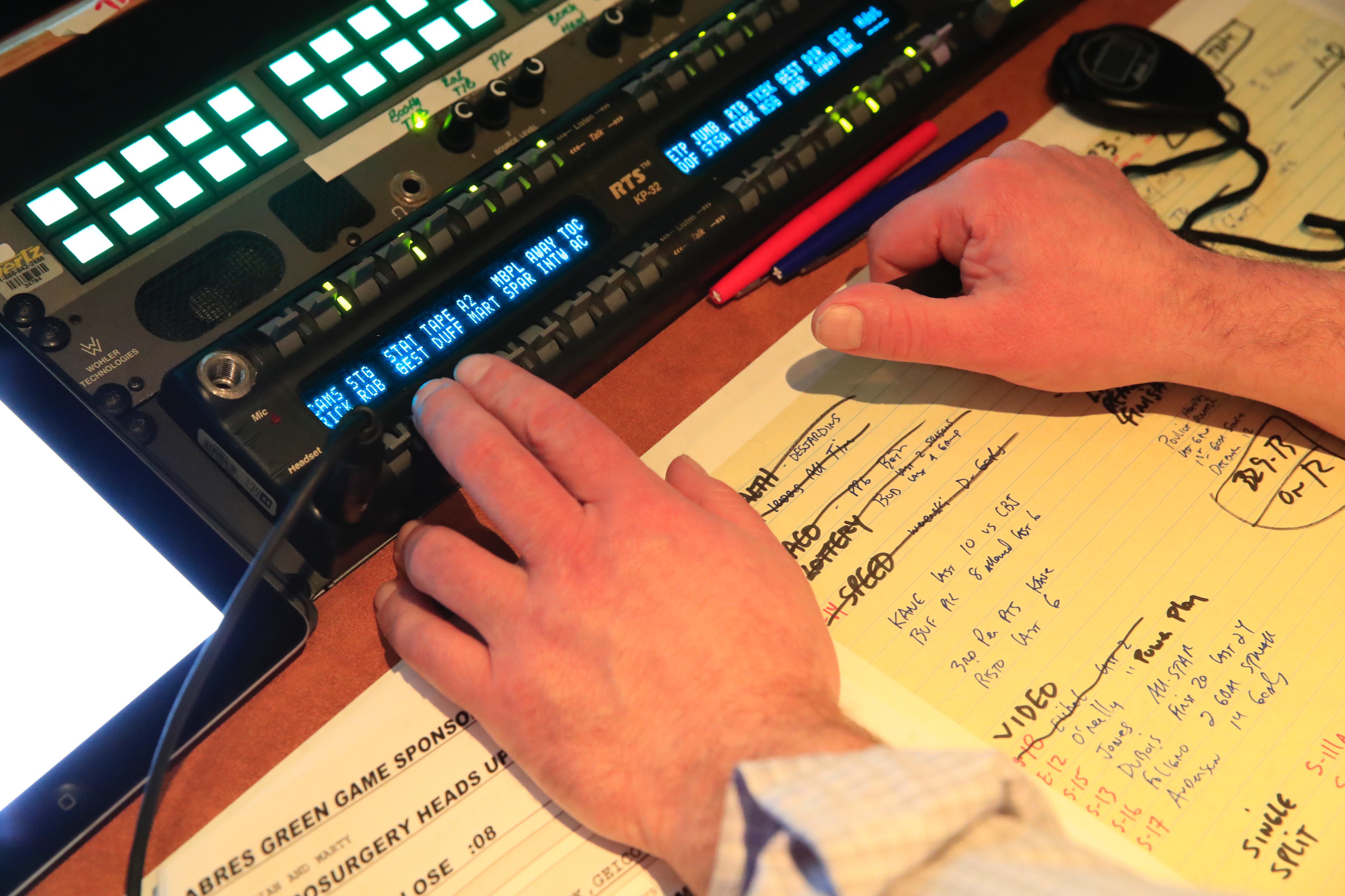 With the press of a button, producer Joe Pinter can talk to the headset of one individual or many. (Harry Scull Jr./Buffalo News)

It's a three-hour live production, so problems will arise. At one point, there was an echo in the broadcast. One camera angle includes an ad superimposed on the glass behind the net. Because the graphic slows the visual ever so slightly, an audio technician has to slow the sound as well. If he didn't, viewers would hear the puck hitting the boards before seeing it get there.

Pinter contacted the master control room on Long Island – the people who take the Sabres' broadcast and send it out through the MSG network – and the problem was resolved.

In a rarity, there were no problems for the Sabres. They snapped a five-game winless skid with a 3-1 victory. As the game broadcast transitioned to the postgame show, the replay operators readied clips of smiling players in the dressing room. The graphics folks typed up the Three Stars and their stats. The producer and director kept choosing which camera angle and replay package to use.

At 10:14 p.m., the show went off the air and the work stopped. Pinter's words of praise traveled to the headsets of cameramen, on-air talent and in-truck technicians. Chrisanne Bellas, the Sabres' vice president of broadcasting, thanked Pinter.

A few hours later, the truck was on its way to New Jersey's arena and a long, successful broadcasting day was complete.

Ullmark's joy for the game lifts the Sabres to a win