Sara Heidinger used to tend bar and wait tables at the Swannie House, in Buffalo's First Ward. She grew up in the neighborhood, and she quickly learned one of the central lessons of that trade.

If you listen, you'll glean wisdom from the people you serve.

One of the customers was Rick Smith, the entrepreneur who turned an old Buffalo grain elevator into the 21st century complex known as Silo City.

Heidinger was restless, thinking about getting out of town. Smith heard her out. She still had a lot of living in front of her, and he told her that it didn't have to be all of one, or another.

Leaving, in a way, could be a bedrock part of staying.

"He'd talk about the value of seeing other places and bringing back what you learn," Heidinger said. "He used to talk about how you can leave, and come back, and then you understand what you missed seeing when you were here."

She heard his advice.

As she soon learned, it was true. 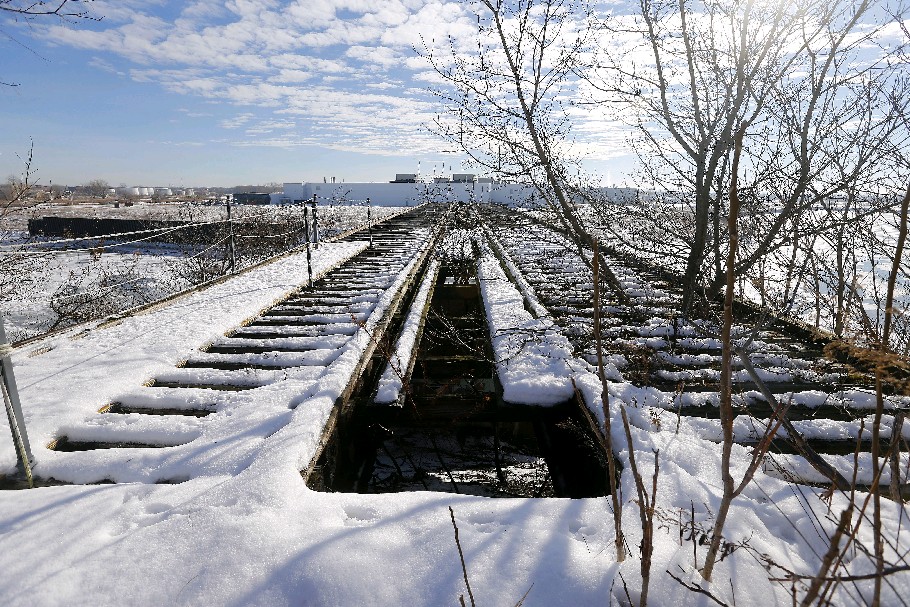 A railroad bridge along the trail of the Buffalo "High Line." (Mark Mulville/The Buffalo News)

That helps explain why Heidinger spoke with such passion Wednesday as she and Nancy Smith - no relation to Rick - walked through ankle-deep snow along portions of what's often described as Buffalo's "High Line." The proposed elevated railway trail would begin with a walking, running and biking link at Canalside and end 1.5-miles later with a railroad half-bridge, a kind of balcony above the Buffalo River, near the new Tesla plant.

Smith is executive director of the Western New York Land Conservancy, which has gathered about $120,000 in grants and donations for initial steps in designing the project. She envisions a trail lined with native plants, with overlooks sometimes rising as high as 25 feet, a project to breathe more energy into an area that she maintains could only strengthen an accelerating waterfront revival.

The conservancy, with the backing of Rep. Brian Higgins, has pieced together support from a complicated web of civic leaders and landowners. Her organization has also held many conversations with community groups, and Jajean Rose, deputy executive director of the conservancy, said the organization is planning an open house for neighbors and the larger community within the next few months.

That process, Smith said, is the only way for the project to succeed.

"You have to listen to the people who are here," she said. "They absolutely have to love it."

The "High Line" reference speaks to the famous 1.45-mile linear park in Manhattan, an inspired piece of urban design shaped from what had been an elevated railroad spur, now one of the top tourist attractions in New York City.

Buffalo's version would be built, for the most part, along railway embankments for the old Delaware, Lackawanna and Western Railroad, known historically as the DL & W.

In the First Ward, Heidinger said, many neighbors knew the abandoned railway as "The Del," playing off the name of the old railroad.

She was born in the 1980s, a time "when the industry was gone and everything around here was about what was," a sense of loss memorialized by crumbling factory walls.

That notion of solitude is the central difference between the Manhattan template and the dream in Buffalo. The original High Line weaves through the crowded heart of one of the world's economic capitals.  The trail in Buffalo offers a walk through long stretches of park-like quiet.

It is a path through the city's post-industrial womb, threading past grain elevators and old plants. It takes you across great iron bridges and past open areas once pounded to gravel by freight cars and heavy equipment, before the rails were discarded and the tall grass returned.

Amid bright morning sunshine in Buffalo, there were striking views of the skyline, of glittering ice on the Buffalo River, of the daily bustle at nearby Larkinville.

Yet the trail was so remote that curious deer often paused to watch the strangers passing by.

"In the absence of industry," Heidinger said, "things take on their own identity."

Occasionally, the trail runs parallel to rows of city houses. That proximity turned the area into a refuge and hideway for generations of neighborhood children,  Heidinger said.

"When we were kids, this was our place to escape," she said.

Boys and girls in the First Ward shared the experience of anyone who's grown up near the ruins of factories. The sense of used-to-be, of old walls and rusty iron, creates the framework for informal, irresistible playgrounds.

The embankments became slopes, Heidinger said, where she and her friends would go sledding. As the children grew older, it was a spot to build forts and have conversations safely beyond the ears of grownups. Eventually, as teenagers, it was a place for a first beer. 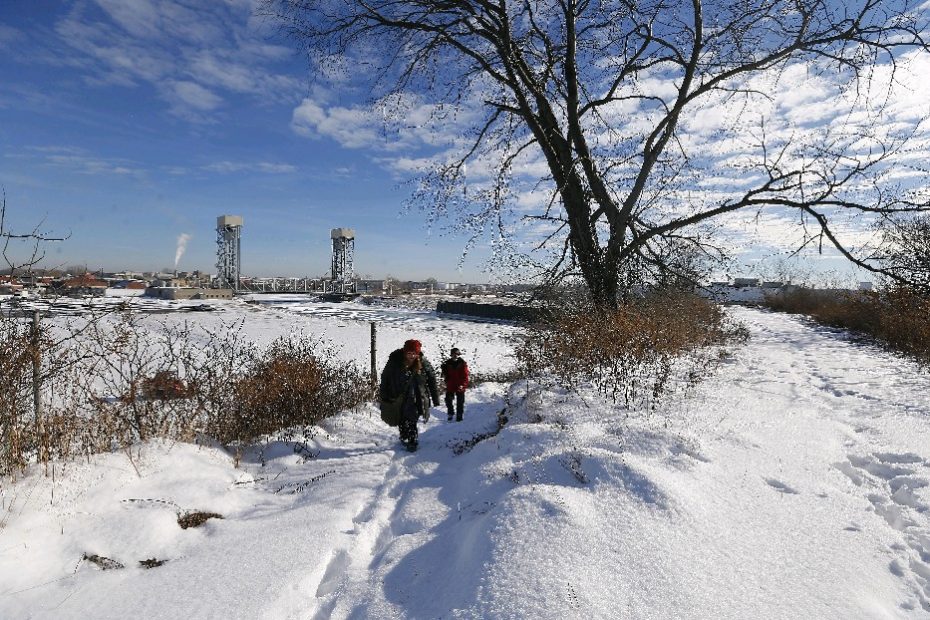 Even in those years, Heidinger said, she believes that on some level she appreciated what's gradually become the  hope of Buffalo, the idea that the exposed bones of a long-ago industrial genesis can be signposts of inspiration, that you can find potential "in the left behind."

That was her world, but she wondered what was beyond it. Decades later, as an adult, Heidinger listened to Rick Smith, the Silo City owner who gave her the advice about the value of leaving town.

After graduating from the University at Buffalo, she eventually moved to Manhattan and spent six years working there in photography studios, which gave her a chance to walk the original High Line.

Five years ago, she returned to Buffalo. In 2015, she was one of the partners who opened Undergrounds, a South Park Avenue coffee house, created in what had been a funeral home – which is about as powerful statement of transformation as you can make.

Heidinger is now president of the board of directors at the Old First Ward Community Center. Smith, executive director of the land conservancy, often turns to her for input and advice.

Homeowners in the shadow of "The Del" want to be sure, as Heidinger puts it, that runners and hikers on the elevated trails "aren't looking into bedroom windows," that the area is safe and well-policed and that someone will thoroughly maintain the entire project, once it's built.

"Things need to happen with us," Heidinger said, "not to us or around us."

She is confident, she said, that all of it will come together. The civic template is different than what she recalls as a child, living in the shadow of industrial ruins, which she now views as the spine of a changing Buffalo.

"Sometimes there's beauty," Heidinger said, "in the breakdown of things."