The 1½-inch thick Swedish steel outfitted on the bow of Buffalo’s Edward M. Cotter fireboat churned through more than a half-foot of ice on the Buffalo River Wednesday.

It was the third day in a row city crews prepped area creeks and streams for an inevitable January thaw coming Thursday and Friday that the National Weather Service cautioned could pose a risk for ice jam flooding.

“We wanted to get way ahead of it,” said Steven Stepniak, Buffalo’s commissioner of public works. “You never know how bad it could get, but you don’t want to take the chance.”

The Cotter broke up ice near the mouth of the Buffalo River near Canalside and the Erie Basin Marina on Monday.

Public works crews carved 50 6-by-6-foot triangles into up to 8 inches of ice on Cazenovia Creek in South Buffalo on Tuesday.

That work continued on Wednesday along with ice-breaking by the Cotter on the river upstream past the South Park lift bridge.

Forecasters said increased runoff of water is expected to result in elevated waters in creeks and rivers. Most are covered in thick ice from the recent cold snap.

“Rapid rises in water levels can break up this ice, which can then become jammed where there are constrictions in the river or creek channel,” the weather service said. “People living in areas that are prone to ice jam flooding should take the time in advance to prepare for the potential for flooding.”

Stepniak said advanced preparation was the name of the game in Buffalo the last few days.

Chopping up the ice on the Buffalo River and carving triangular holes on Cazenvoia Creek should hasten melting and alleviate potential for serious ice jamming. 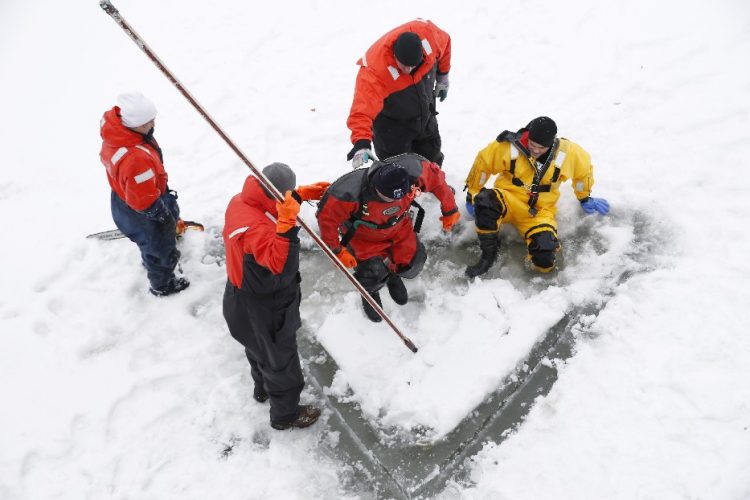 Crews were out on Cazenovia Creek on Tuesday, cutting 50 6-foot-by-6-foot triangles in the ice on the surface of the creek to help alleviate ice jams later this week. (Sharon Cantillon/Buffalo News)

It’s also the best time for city work crews to proactively deal with those potential problems before flows  start picking up in the thick of the thaw, Stepniak said.

“When it really starts moving, it’s not the best time to be out on the boat,” Stepniak said.

After back-to-back mild winters, 3-year veteran Cotter fireboat Capt. John Sixt is getting one of his biggest challenges at the helm of Buffalo’s 200-ton ice-breaking fireboat. 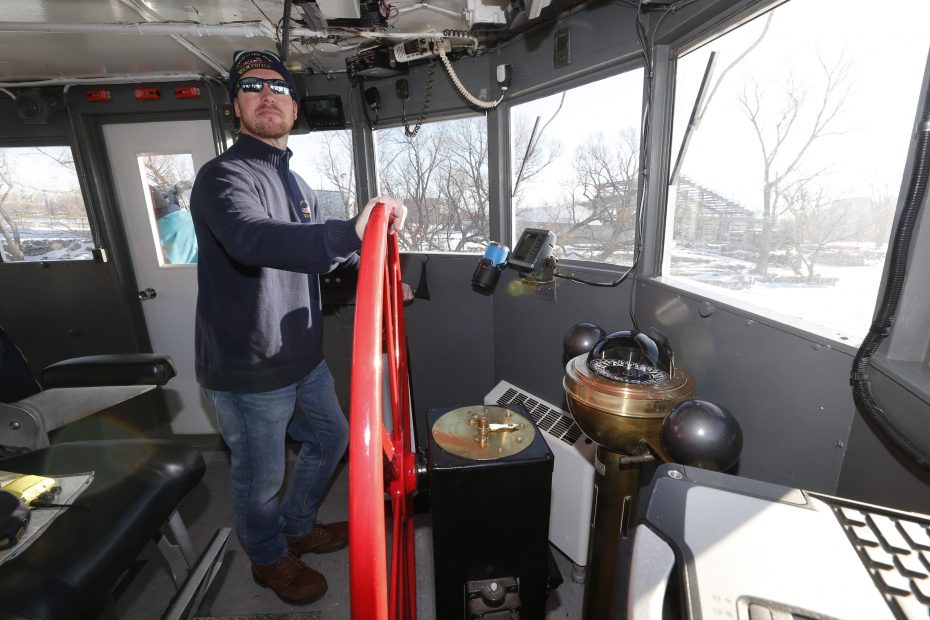 Sixt said the 117-year-old Cotter was built as an ice-breaking vessel after two predecessors couldn’t cut it.

The Cotter is designed to slowly carve through the ice up to 2 feet thick. And, it’s a tedious process.

“The ice dictates what the boat does,” Sixt said. “A few years ago, it took us eight hours to get from (the Michigan Avenue lift bridge) to the Skyway.”

It’s the weather that will dictate what the ice does, but forecasters can’t pinpoint exactly when and where the problem areas will be.

“All we can say is there is an existing ice pack. It will break up and work its way downstream. And, at some point, there will be a backlog somewhere,” said Dave Zaff, a weather service meteorologist.

The thaw will be a short-lived one.

The cold air rushes in from the west Friday, sweeping away the Buffalo Niagara region's brief two-day January thaw. Temperatures won't make it out of the teens this weekend. (StormVistaWxModels.com)

Temperatures will remain in the 50s overnight Thursday through dawn on Friday before dropping precipitously through the day.

It will be in the 30s by early afternoon and 20s by dinnertime, forecasters said.

Rain is expected to transition into a wintry mix of sleet and freezing rain with the possibility of heavy snow later in the day.

The mercury continues its plunge into the teens overnight Friday. Frigid conditions are expected over the weekend with highs only in the teens and overnight lows in the single digits.

The bright side? The flash freeze should stop any flooding from the thaw in its tracks.

“What typically happens is when it cools off, (the ice jam) locks in place, and we have to wait for the next warm-up,” Zaff said.