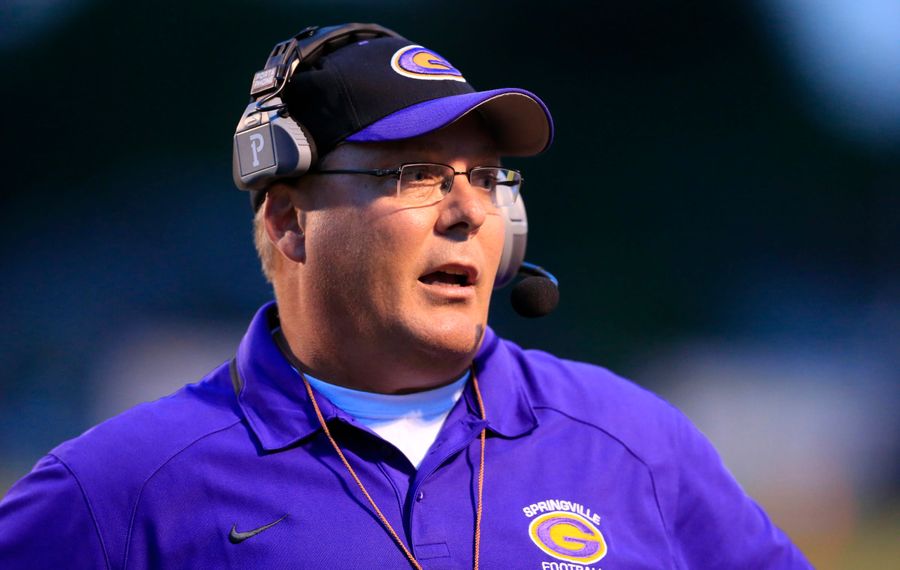 For seven years, Eric Jantzi sat back and watched as some of his students walked the halls in game-day jerseys on Fridays in the fall. When the final bell rang, he was out the door traveling down to the Southtowns to coach instead of gearing up for a game on North Tonawanda’s George J. Vetter Stadium.

He never got to coach Jordan Holmes, Jake Ferry or Austin Tober at NT. He could only imagine what guys like Zack Woodard and Joe Dotterweich would have looked like in a triple-option offense.

“It bothered me – it tugged on my heartstrings a little bit,” Jantzi said.

Jantzi won’t have to deal with that any longer.

The North Tonawanda School Board voted unanimously to approve Jantzi as head football coach of the Lumberjacks. Jantzi will return to NT, the same program he led for 11 seasons and the same community he helped bring a state championship to in 2009.

To make the reunion even sweeter, Jantzi’s key assistant coaches from his last stint at NT will also be returning.

The board approved Rick Tomm, Corey Zayatz and Chris Cook as Jantzi’s varsity assistants. NT boys hoops coach Ryan Mountain will head the junior varsity team with help from assistant coach Erik O'Bryan, who coaches boys basketball at Niagara Wheatfield. All five coaches were at NT during its state championship run in 2009.

“I’m actually really excited that I get to work with the kids in the school I teach at and that I get to work with my old buddies that I use to coach with,” Jantzi said. As a coaching staff, “we shared a lot of memories together over the years. We know what to expect from each other. We wanted to get some more stability in the school here and I think we’re going to be a very functional group.”

After stepping down from NT in 2010 to, he said, spend more time with his family, Jantz quickly landed at Orchard Park and then Springville. He was an assistant at Orchard Park (2011-13) for its state championship season in 2011. He then went to his alma mater, Springville, as an assistant in 2014 and eventually became the Griffins’ head coach for two seasons (2015-2016).

Jantzi led Springville to its first division title since 1996 during his tenure, but a year later the logistics of commuting and coaching outside the district weighed on him and he stepped down after the 2016 season.

“It’s tough coaching at different places when you’re not in the building,” Jantzi said. “You don’t have your thumb on the guys throughout the day and that’s challenging. Being in the building now, I’ll be able to try to drum-up interest of players that maybe didn’t come out last year and do other things like that.”

Football in NT is different than most communities in Western New York. In the fall, it has a Texas-like feel. You can expect the topic on barstools at water holes like Klimek’s or Dwyers to be centered around the Lumberjacks, with locals debating about whether Jantzi should have run a boot pass on fourth-and-5 or a veer option.

“Everybody cares about football here,” Jantzi said. “When we had it going pretty good here, we were filling the stands every Friday night. You see someone on the street or at the supermarket all the time wishing you luck or wanting to talk football. It’s important in this community and that’s one of the reasons I wanted to come back.”

Jantzi spoiled the NT faithful in his tenure. Along with an 86-23 record, and the 13-0 dream season in 2009, Jantzi led North Tonawanda to eight Class AA North titles, two Section VI titles and made four trips to Ralph Wilson Stadium in his tenure.

That’s why when Jantzi walks out of the locker room for a home game next fall, it’s going to be anything but ordinary.

“It’s going to be pretty emotional,” Jantzi said. “We had the program firing on all cylinders back then for so long. All of the memories are going to rush back that first game.”

NT knows what it’s getting with Jantzi. His triple-option offense is unmatched locally, and he plans on reinstalling it right away. One nuance that locals may not expect is a new and improved passing game.

“Over the last few years, I’ve learned a lot in the passing game and some of the spread stuff,” Jantzi said. “We never really dealt with it too much because we had to be a one-horse show, so to speak, with the offense we had and the talent we had. Now if we need to, adjust, we can do that. I don't want to fit a square peg in a round hole."

Jantzi already has a team meeting scheduled and expects to have the team together in the weight room right away.

"We have to build it up from the ground up, in terms of the kids' behavior in school, work ethic, grades and things like that," Jantzi said. "Once we do that, the other stuff takes care of itself. We definitely don't want to say, 'Hey, we're rebuilding this year.' We want to go out and win and we have a great opportunity to do that right away."