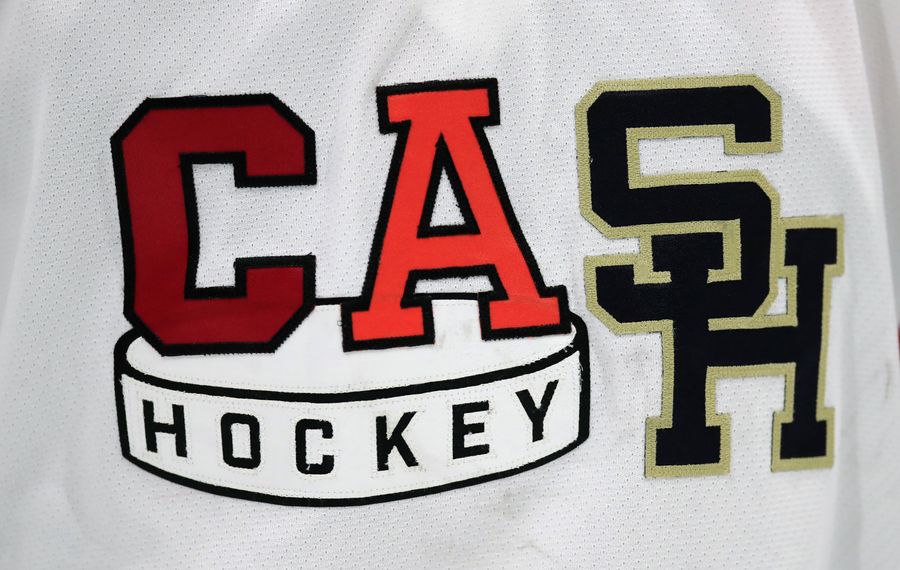 One nickname's roots can be traced back to a joke between teammates, while the other appears to have been born from a statistician's shorthand.

Regardless of their origins, there's no denying that the acronyms FLOP and CASH have become as much a part of the Western New York Girls Hockey Federation as the players and late afternoon games. CASH has the jerseys to prove it, FLOP the Twitter account.

Quick review for the uninitiated:

-- FLOP is short for the combined team name of Frontier, Lake Shore and Orchard Park. Don't be fooled by the not-so-flattering moniker, as FLOP is the defending Section VI and Federation champion and currently stands in first place.

-- CASH stands for the merged squad of Clarence, Amherst and Sweet Home.

"I think its catchy rather than saying Amherst-Sweet Home-Clarecnce," CASH coach Nicola Adimey said. "I definitely have more people asking. For the girls themselves, it's nice you don't have to say all three schools. It's nice because we have a logo that incorporates all three schools. ... I think the parents were calling it CASH before we were. The girls loved it."

All seven teams in the Federation are combined outfits, but not all the letter initials of each school rearrange as nicely as FLOP, CASH or even LID (Lancaster, Iroquois and Depew). Since the three Williamsville schools are known officially as Williamsville while the various Catholic schools that comprise the Monsignor Martin High School Athletic Association combined team is Monsignor Martin – there's no real need for acronym-shortened names to identify those two. Nor is there really a need for one for Kenmore-Grand Island.

The combined team of West Seneca, Hamburg and Eden on the other hand – hello HEWS.

"The girls came up with that one," said Tom Ferro, the team's first-year head coach.

But who came up with FLOP?

Travel-team teammates Gabby DeMeo of Frontier and Emily Kromer of Lake Shore get the credit for that one, according to FLOP coach Bob Klimowicz. When the two first learned that Lake Shore would join the merged Frontier-Orchard Park team, they jokingly said FOP can now be called FLOP as they strategically placed the 'L' from Lake Shore in between the F for Frontier and the OP for Orchard Park.

Little did they know FLOP would take on a life all its own. While there are a handful of folks who don't like to call the team that for obvious reasons, a perk of that and the other nicknames is that it has helped promote the all-for-one and one-for-all feeling for each team.

"You don't want to give more credit to one school than the other," Klimowicz said. "At least from our standpoint, we're all equal from our contributions. We've all invested in it."

"I think it's kind of cool they do that because the girls hockey community is pretty small," Ferro said. "These girls have played against each other and with each other (at the travel level) for a number of years. … The acronyms are just an extension of that. They come up with these acronyms and then they can identify the us versus them even though later that night they may be playing on the same team (at a travel practice or game).

From the CASH point of view, the original Amherst-Sweet Home team nickname Katz didn't fit anymore once Clarence joined the crew in 2015. Amherst's nickname is Tigers, while Sweet Home's is Panthers so Katz on the jersey made sense. Clarence on the other hand is Red Devils. They tried to add horns to the existing Katz logo but Devil Katz didn't seem to catch on.

"We tried a lot of variations as we wanted every player to feel included," CASH coach Nicola Adimey said.

Turned out Emma Faso's father came up with the perfect abbreviation – as he started writing CASH on his stat sheets.

"Suddenly everybody embraced it and CASH was born," Adimey said.

"I think when we started calling the team CASH others started," she said. "Next thing you have FLOP, LID."

While FLOP has jerseys that feature each partner's school name and logo on it, CASH went off the board in bidding farewell to its old duds. The new logo across the front of the team's home and away uniforms features a red-colored C of Clarence, with the A in Amherst Tigers orange with the S and H the Sweet Home Panthers' official navy blue with gold trim scheme.

"I actually kind of liked them," Klimowicz said of CASH's jerseys. "That's their nickname. It represents all three of their teams. … It's different."

Of course what works for one team wouldn't necessarily work for another.

"I don't think the ADs would've been OK with us spending money and putting FLOP on the front (of our new jerseys)," Klimowicz said. "That wouldn't have gone over well."

While the nicknames are fun, they serve as a reminder of the main purpose of the mergers. They exist to provide playing opportunities to girls who want the option of playing the sport for their schools.

"The combining has made for some deep-talented teams top to bottom," Williamsville coach and Federation chairman Richard Hopkins said. "It's really balanced."

With catchy names to boot.