Colleen Phillips said her father's memory is a complicated thing. John Phillips can get up in the morning and forget where he put his glasses, or any appointments he planned for the day.

He'll settle into a big chair in the living room of Colleen's house in South Buffalo, where great-grandchildren a solid 90 years younger than he is will present him with pictures they colored, then debate the shading nuance of their Crayolas if he patiently contends it's purple when they maintain it's blue.

Colleen finds something beautiful in that good-natured back-and-forth. Phillips is one of the last "Baker boys," the orphans who actually knew the legendary monsignor known as Father Nelson Baker before his death, in 1936.

The deeper you go, Colleen said, the more precise her father's recollections become. He can remember when a few of the boys in the dormitory at St. Joseph's orphanage in Lackawanna talked into the night about the world they'd someday face.

"We used to take a chance on which one of us would live the longest," Phillips said.

He won the bet. He turned 95 on Jan. 1, a day he's celebrated as his calendar birthday since he was a small child.

While he believes he was born on New Year's Day, he can't be absolutely sure. In 1923, the mother he never knew relinquished custody at birth. The orphanage created his name.

Sean Kirst: In Buffalo, who do we celebrate St. Patrick's Day without Joe Kelley?

What's beyond dispute is that Phillips "is living history," in the words of the Rev. Richard Gribble, biographer of Father Baker.

To the best knowledge of Monsignor Paul Burkard, pastor of Our Lady of Victory National Shrine and Basilica in Lackawanna, Phillips is the last of the "young men who knew Father Baker personally."

It is possible some survive who've lost contact with the parish, but there were only seven known Baker boys when Burkard arrived seven years ago. 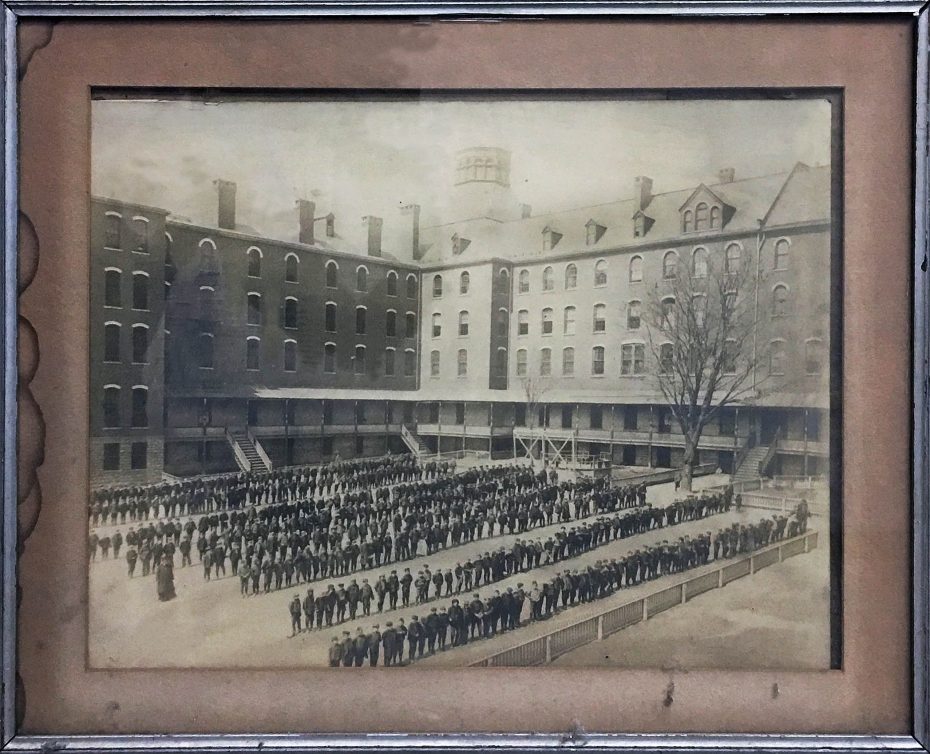 The courtyard at Our Lady of Victory, which at its peak housed hundreds of children in St. Joseph's orphanage or St. John's Protectorate, early 1920s. (Photo courtesy Mike Waltz and Our Lady of Victory National Shrine and Basilica).

The death last year of Joe Kelley brought it down to John Phillips, alone.

"They're the ones who knew him best," said Burkard, noting how historians and archivists often relied on the "Baker boys" for eyewitness details in response to many questions.

Once the last one is gone, Burkard said, that heritage is lost.

Phillips was a pallbearer when Baker's remains were exhumed in 1999 and moved to Our Lady of Victory basilica, part of an ongoing effort to have Father Baker canonized by the Vatican, and thus officially made a saint. Phillips, who speaks with passion of that cause, is also a regular participant in Father Baker Day, held during the summer.

"He was the guy who did the wreath," said Elaine Georgevich, 83, who recalls many of the orphans from the time when her parents ran Joynt's Restaurant, near Our Lady of Victory.

Both Burkard and Richard Blake, an author and researcher, say Phillips is one of the last survivors of an era when orphans from other states routinely ended up in Lackawanna, a practice that shrank dramatically after Father Baker's death.

Phillips never knew his parents. He was born in Wheeling, W.Va., he said, "and 23 days later the nuns came and got me." He grew up in St. Joseph's, the orphanage that was a central part of what Father Baker, a Civil War veteran, called his "city of charity."

Later on, Phillips moved across the street to St. John's Protectory, which housed older boys and taught them working skills. In the early 1940s, after Phillips returned from working in the Civilian Conservation Corps at Watkins Glen, a priest drove him to the old Central Terminal in Buffalo, where he boarded a train and left for World War II.

Phillips survived combat in the Pacific, then came home. No one was waiting to greet him when his train arrived. He made his way back to the orphanage and worked there for a time, before enlisting in the Navy. 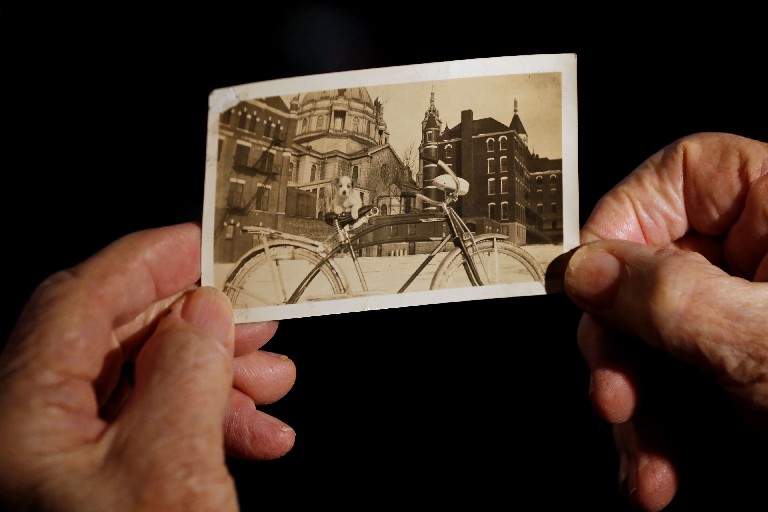 John Phillips holds an image of 'Jimmy,' a dog he helped raise for a priest at Our Lady of Victory when he was growing up as an orphan in Lackawanna. (Robert Kirkham/The Buffalo News)

Certainly, his story involves plenty of heartbreak. He remembers how some of his friends were adopted in childhood, and how he helped carry their bags to the door when their new parents arrived.

That never happened for him. The orphanage was the only home he ever knew, and Father Baker – patriarch of a vast extended family – was as close as he came to a true father.

Phillips still remembers Father Baker, as an older man, ice skating in the winter. He remembers how the boys sometimes traveled to Delaware Park and received ice cream as a treat, and Father Baker offered a blessing before they started eating.

"He would have given you the shoes off his feet," Phillips said.

The last time Phillips recalls seeing Father Baker was during a final illness in the 1930s, not long before his death, when the children were sometimes sent to bring him meals.

Ask some of the "orphans" who were a little younger but remain in greater Buffalo – maybe Jerry Janan, a retired educator, or Billy O'Donnell, who spent his career running heart-lung machines during cardiac surgeries – and they speak of the lasting bond among the boys who grew up behind those walls, even if they came from different generations.

"I think there's a certain feeling of warmth, of closeness, for any of us who were there," O'Donnell said.

He and Janan remember Phillips as an older guy in charge of programs at a summer camp in Eden, and as a presence at many events and ceremonies over the years. The death last year of Kelley, a good friend, only amplified his status.

Sean Kirst: Locked in darkness, an abandoned orphan runs to a new life

While Colleen and others in her family are planning to hold a 95th birthday celebration for Phillips, there are no particular gifts that Phillips wants. Grow up with nothing, and you appreciate fundamental things, like an easy chair in a warm living room, like a porch where you can sit and watch the world on summer evenings.

He still keeps a wooden trunk from the orphanage under his bed, filled with clippings and artifacts important to his life. He met his wife, Maryann, when she was also working at Our Lady of Victory, making formula in the nursery. They raised five children and later divorced, but remain on friendly terms.

Phillips retired from the Elma water department, his daughter said. He had been in a nursing home before he moved in with Colleen about two years ago, a decision that friends say caused a noticeable improvement in his health. 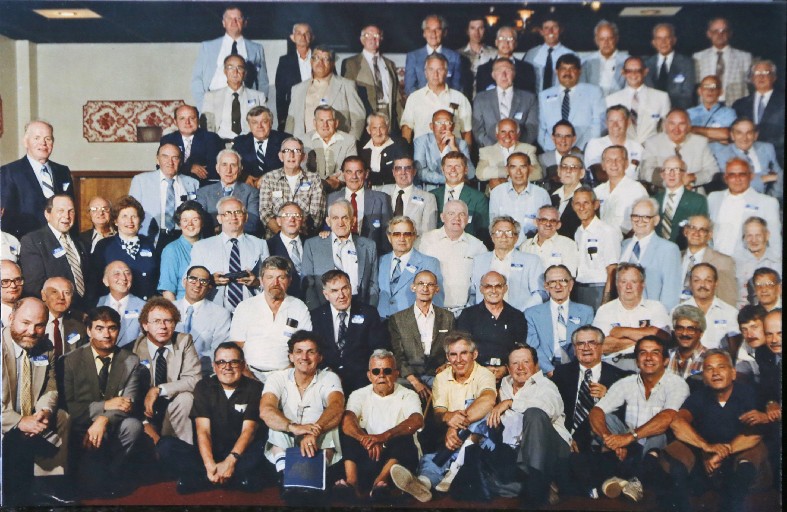 That trunk contains a photograph showing dozens of orphans, as grown men, during a 1986 reunion at Our Lady of Victory. The New York Times covered the event, and writer Michael Winerip did an article containing this memorable line.

None of the orphans was famous, Winereip wrote, "but every one of them had gone farther than a Depression orphan was expected to."

By that standard, Phillips is a colossal success.

"It's a miracle that I'm still alive," he said.

The only gift he really dreams about amounts to one announcement, a moment he hopes he lives long enough to see, the day when the Catholic Church gives formal meaning to these words.

"He was the one who raised me," Phillips said, "the one who brought me to life."