Maybe it would have been easier if it was a 35-point blowout.

Whether it was at the corner bar or the corner of the sofa, the hopes that Buffalo Bills fans had allowed to ignite were smothered again after the Buffalo Bills 10-3 loss to Jacksonville Sunday.

But it was fun while it lasted. Football fever, the likes that had not been seen in 17 years, warmed Western New York in a bitter cold week that saw fans donating hundreds of thousands of dollars to the foundation of the Cincinnati Bengals quarterback who helped them get there, as they prepared to root for their team.

However it came out, this one was special.

Greg McManus knew it. He stopped at the Big Tree Inn in Orchard Park for the first half of the game before going to a family party at his sister's house. The family has taken turns hosting game day parties for about 10 years. There's a schedule, and each family picks a game. But after the Bills made it into the wild-card playoff game Sunday, they didn't know where to hold the get- together. No one expected a playoff game.

"This year's special," McManus said. "If they win, I'm going to Boston."

But not this year.

Back in the day, most of the playoff games were home, and they had to add extra tables at the Big Tree Inn. The crowd wasn't that big Sunday, and some fans left at halftime.

History lines the walls in the tavern that stands in the shadow of New Era Field. The jerseys of some of the Bills' great players — Kelly, Talley, Hull, Smith, Thomas and Reed — are mounted around the barroom, making it a must-stop for fans on home game days, as well as the media, including a Sports Illustrated reporter who was taking in the color of the community Sunday.

The wooden carvings of Jim Kelly, Andre Reed and ESPN's Chris Berman standing guard over Abbott Road outside the tavern have seen better days — Berman is missing an arm, and Kelly is in splinters.

Owner Brian Duffek said preparations began after the Bills' win the week before. He echoed the thoughts of every bar and restaurant that hosted fans Sunday after the 17-year drought.

"We didn't expect to make the playoffs. Once they did, we had to kick into gear," Duffek said.

That meant laying in plenty of Labatt Blue, chicken wings and French fries.

Pam McLaughlin grew up down the road, and has been coming to the Big Tree Inn since "I was old enough to drink." A former Buffalo Jill, she and her children are diehard fans. 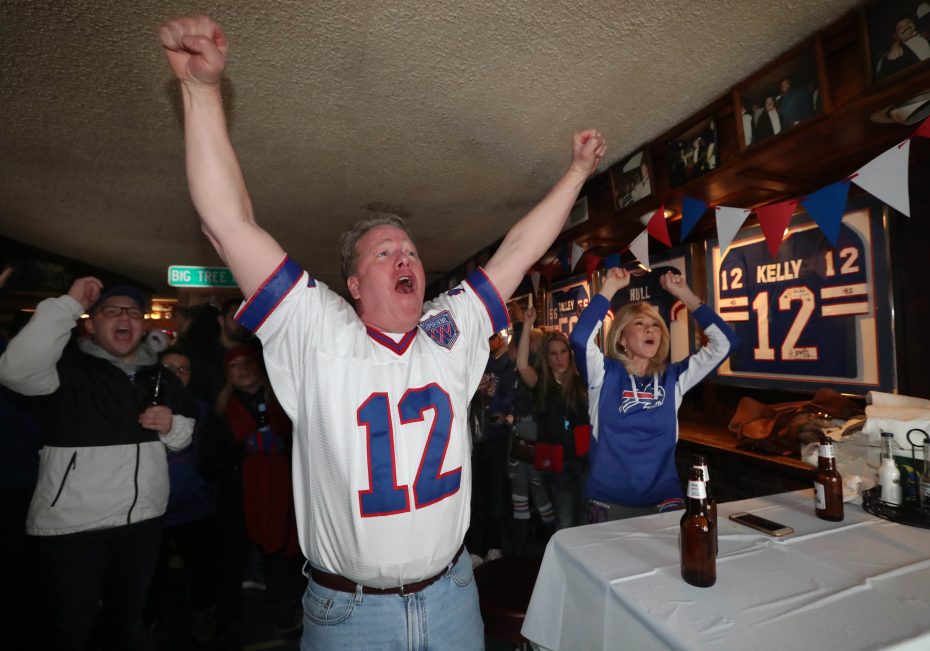 Beth and Chip Scheffler of Eden came with their sons, Scott, 25, and Daniel, 22, and nephew, Nick Abulone. Their sons don't remember the Bills making the playoffs.

"I've seen four Super Bowls," Chip Scheffler said. "I've been to the top of the mountain."

And like many fans who put their faith in the men in red, white and blue, he tries to keep his hopes high and his expectations low.

He may be the admitted pessimist in the family, but Scott and Daniel are the ones to reignite the flame. They watched the last regular game of the season at the Big Tree Inn, and the Bills won.

"We thought we should come back," Daniel Scheffler said.

Quinton Jefferson prefers an open-ended job title."People ask me what I play on the D-line and I just say, 'I play D-line,'" he said. "I take pride in learning the whole defense, the whole front."

And they brought their parents.

She was excited to watch the game through the eyes of the next generation of fans.

"All I've ever known is mediocre football and missing the playoffs," Daniel said, adding he's been an avid student of the game for the last decade. "It's only 10 years since I started watching, but it seems like an eternity."

He can only imagine how long it seems for his parents, or someone like Eugene Smaszcz of Orchard Park, who has missed five home games in 39 years. His first job at 15 was cleaning up at the former Rich Stadium.

"That stadium's like my second home," said Smaszcz, who was wearing a Fred Jackson jersey.

He switched from a Sammy Watkins jersey.

"I put this on and they won the last two games," he said. "Gotta keep wearing it."

But the Jackson magic was not to be, at least this year.

Chip Scheffler saw it coming as the minutes clicked down, and there was still hope for a Hail Mary.

"This is Buffalo," he said. "They waited until the last final second to cut our throats."

But then he took a breath, and looked at his sons, who had asked their parents to come out and watch the game — something special — and decided it wasn't all bad.

"We came, and we had fun," Scheffler said.