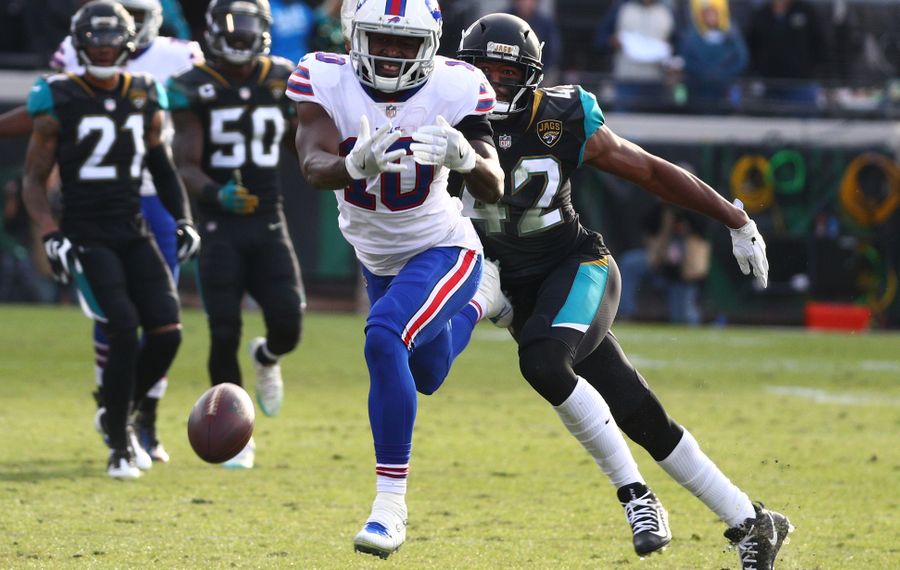 JACKSONVILLE, Fla. — The hard feelings were still raw in the visitor's dressing room at EverBank Field on Sunday.

Glum silence replaced the smiling and hugging and dancing from a week ago, when the Buffalo Bills' 17-year playoff drought came to a surreal end with the help of an unlikely touchdown in another game.

As painful as the 10-3 AFC Wild-Card playoff loss against the Jacksonville Jaguars might have been, there had to be some solace from the fact the Bills far exceeded anyone's expectations before the season.

"This one hurts. This one definitely hurts."

The Bills did most of the damage to themselves with a horrible offensive showing that resulted in their lowest postseason point total since a 31-7 loss against the Kansas City Chiefs in the 1966 American Football League championship game.

Although the Bills' defense did a credible job in limiting the Jaguars to only one touchdown and a mere 230 yards of total offense — including only 57 yards by rookie running back Leonard Fournette — it wasn't exactly puffing its collective chest. The TD came on a 1-yard pass from Blake Bortles to tight end Ben Koyack, who had caught only five passes in the regular season. The Bills also allowed Bortles to rush for a game-high 88 yards (one more than his passing total), with multiple runs coming in key situations.

"I'm proud of this team, I'm proud of the way we played this year," center Eric Wood said. "But, no, it doesn't feel good at all right now. Our goal was to come in here and win. I felt like we could have, should have, but that doesn't do very good now. It's a tough one to swallow. I felt like that game was out there for us to take and we just couldn't make the plays to do it."

Besides Taylor, others who also might have played their last games as Bills were 12-year veteran defensive tackle Kyle Williams, who might end up retiring, and 11-year veteran linebacker Lorenzo Alexander, who also could be headed for retirement. Their teammates wanted to keep the postseason dreams alive, especially for Williams, as popular a player as the Bills have ever had and a rallying point for the team. Williams said afterward that he plenty of time to make a decision on potentially retiring.

"He always says he doesn't want to make it about him, but you put your best foot forward because of him because you want to see him with a (Super Bowl) ring on his finger and for us not to do that for him, it was heartbreaking," offensive tackle Jordan Mills said. "He's put his blood, sweat and tears into this team, this organization and on that field, and it's heartbreaking not to get that win for him and move on in the playoffs."

First-year coach Sean McDermott, whose season-long mantra has been about "the process" recognized the importance of ending the drought, but now turns to a player evaluations and the offseason calendar.

"It’s a step," he said. "We’ve come a long way in a short amount of time. That said, we’re not where we need to be, that’s obvious. We still want to be playing. We’re not playing next week."