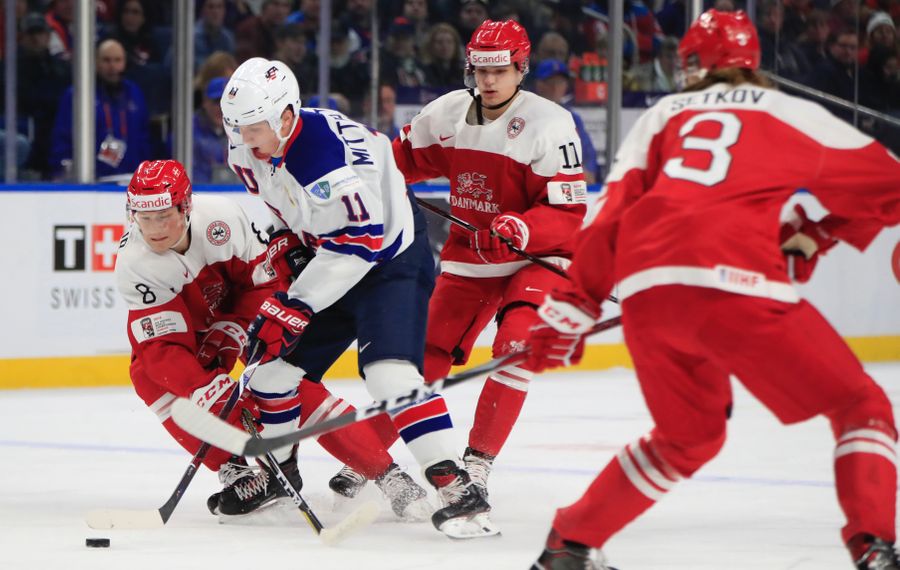 Canada finished off the 2018 World Junior Championship with an impressive 3-1 win over Sweden  to capture the gold medal in Buffalo's KeyBank Center Friday night.

The U.S. captured bronze, the first time the Americans have medaled in three straight World Juniors, and plenty of individual players turned some heads.

Here are 10 takeaways from this year's tournament:

1. Repeating is hard. But so is winning a medal, any medal. There has not been a repeat gold medalist at the World Juniors since Canada had a run of five straight titles from 2005-2009.

"You run the gauntlet when you come to this tournament," said U.S. coach Bob Motzko as the Americans bid to repeat ended with a loss to Sweden in the semifinals. "We got going, we got on a roll, but the injuries had a big impact on our team. Some of those things are tough to overcome and I'm sure not saying that as an excuse but I'm sure over the years, and I'm not a huge study of this tournament year after year, but when you're fighting for the 12 days, certain things can knock you off. … Canada's had that one big run but outside that, to my knowledge, it's very difficult to repeat."

The U.S. rallied after its loss to Sweden to win the bronze medal. For some it’s a consolation prize, but for those in USA Hockey it's a sign the country is ready to be a power player on the international scene.

With something to prove, the U.S. wins bronze

2. Casey Mittelstadt is really good. Sure we knew this in theory. We've seen the highlight goals from his first semester of college hockey at the University of Minnesota. But for two weeks we got to see it up close and personal.

His skill is everything people say it is. He has great vision and great hands. He has great hockey IQ. He can make amazing passes, set up his teammates, and score beautiful goals.

He finished tied as the tournament leader in points with 11 (four goals, seven assists) and was named the tournament's most valuable player. Mittelstadt likes to have the puck on his stick but he's also reflective enough to understand his game without the puck needs to improve. And it has.

While many would have liked Mittelstadt to just stay in Buffalo permanently, time back at Minnesota will give him an opportunity to work on his strength and endurance, something he'll need more of in the pro game. And while Mittelstadt stands out among his peers, how he fares against older, stronger, more experienced players at the pro level is an entirely different set of questions.

Still, Buffalo Sabres fans should be closely following Minnesota the rest of this season to see the continuation of some beautiful hockey skill.

3. Alexander Nylander loves wearing that yellow. It was the third and final time Nylander would play for Team Sweden in the World Juniors and the forward certainly excels when he's playing for his country.

Last year, he was tied for the tournament lead in scoring with 12 points. This year he had seven points (one goal, six assists). But the production drop-off wasn't about his game but rather about the team Sweden brought to the tournament. The Swedes had plenty of speed and offense throughout their lineup, so Nylander didn't haven't carry the scoring load.

"First off, it's tons of routine, tons of experience," Swedish coach Tomas Monten said of Nylander this year. "He's been great for our younger players. Playing his third World Juniors, he doesn't need to get tense or anything. Then I think he's developed his defensive game. He plays a hard PK, he plays on our power play, he plays last-minutes shifts five-on-five. He can play in all situations, I think that's the biggest difference."

Nylander has seen how playing at the World Juniors has helped his own game.

"To come to this tournament, and I’ve been here for three years now, really helps my development," Nylander said. "I’m working hard, doing the things I’m good at, working on all your game offensively and defensively, so it’s a good challenge."

The question now is if this time, with a silver medal in hand, Nylander can translate that development and experience into success at the pro level. That's something that failed to happen last season when he returned to the Rochester Americans after an outstanding World Juniors.

4. Rasmus Dahlin looked like a No. 1 draft pick. The 17-year-old defensemen from Sweden is a candidate to be chosen No. 1 in the 2018 NHL Entry Draft. While there is debate whether he wrapped up that top spot with his performance at the World Juniors, he certainly impressed everyone in Buffalo.

Dahlin had six assists, led Sweden with 25 shots and averaged more than 23 minutes a game.

"He was a really good player for us," Sweden coach Tomas Monten said. "He's still young. He carried a lot of minutes and he did everything we expected and more."

Monten said he probably won't see Dahlin again for the 2019 World Juniors, implying that he will be in the NHL with the team that drafts him at this time next year.

5. Canada won with depth, not all stars. When Tyler Steenbergen scored what proved the game-winner in the final minutes of gold medal game, he was the 15th Canadian player to score and the last of the team's 13 forwards.

What a time to get his first of the tournament.

But that should come as no surprise for Team Canada. That's how this year's World Junior team was built – for depth, not for star power. The players were all willing to check their egos at the door, especially the seven who returned from last year's silver-medal team.

"Obviously Dom Ducharme was coach last year so we knew what to expect," said Canadian captain Dillon Dube. "It's nice we had time to regroup with the guys who came back. We really implemented the way we wanted to play a little more, have some more practice time and play more of a team game."

It was a bit of redemption for Canada, which blew a lead against Russia in the 2011 gold-medal game, held in the same building in Buffalo, and lost to the U.S. last year in a shootout.

Marcus Davidsson played a fourth-line forward role for Sweden. While not flashy with numbers, he was solid and a key reason why Sweden won a medal after suffering three years of fourth-place finishes.

Defenseman Vojtech Budik had five assists for the Czech Republic, which lost in the bronze-medal game. The fourth-place finish was devastating to the team, but was its best finish since winning the bronze in 2005.

Goaltender Ukko-Pekka Luukkonen was the workhorse for Finland. His numbers weren't great – a 3.13 goals-against average while saving 87.8 percent of the shots he faced. But his teammates often seemed to leave him out to dry and Luukkonen largely kept Finland alive in games.

7. Players boosted their NHL Draft stock. While Dahlin gets the majority of the attention for the upcoming NHL Draft, there were other draft-eligible players who stood out at the tournament.

Tkachuk was impressive for the U.S., finishing third on the team with nine points (three goals, six assists).

"I think he's been outstanding," U.S. coach Bob Motzko said of Tkachuk during the tournament. "He only plays one way. It's just hard and heavy. It's pretty special how that kid works and then he's got hockey talent to go with it."

Brady Tkachuk making name for himself with U.S. Junior Team

8. Attendance was low. Officials said that "ticket sales were not as robust as we would have liked." And they certainly weren't. The optics were bad for the majority of the games, with the exception of the outdoor game at New Era Field and the gold medal game, which drew 17,544.

Fans complained about ticket prices. Officials said the weather kept people away. (Oddly, the same weather which apparently kept fans away from coming to downtown Buffalo didn't keep them from standing outside for a game at New Era Field. More on that in a minute.)

There is something to be said for an oversaturated market. The World Juniors have been in the greater Western New York/Southern Ontario region four times in the last seven years. The event lost its specialness in the area.

A weaker Canadian dollar may have impacted fans from the other side of the border, although they did save the atmosphere of the tournament, particularly when they wholeheartedly adopted Team Canada's goal song "Hey Baby!"

Attendance not an issue for World Juniors officials

9. The outdoor game was amazing. From the flow of a hockey tournament for players, coaches and staff, it was a difficult proposition. From an event standpoint, it was amazing.

The tournament set a record with 44,592 fans in New Era Field for the first-ever outdoor game at the World Juniors. The game sold largely because of its uniqueness. Fans came for the event, the spectacle, perhaps even more so than for the hockey itself. Perhaps the outdoor game took away from the rest of the tournament. If there was one game people could afford to go to, both with limited time and money, it was going to be the showcase event.

And the showcase event lived up to its billing. A snowstorm dumped several inches of snow on the rink set up at New Era Field during the course of the game. It was cold and windy and the game was played in the desired snow-globe effect that looks so cool in pictures and replays and gives the participants a once-in-a-lifetime memory.

The drama of the game added to the hype as the U.S. rallied from a two-goal deficit in the third period to defeat nemesis Canada, 4-3, in a shootout.

Officials aren't looking for an outdoor game at every World Juniors, but the success of this one keeps the possibility open in the future.

10. Bye, bye Belarus. Hello Kazakhstan. After winning the Division I-A tournament last year to gain promotion into the World Juniors this year, Belarus again finds itself relegated to Division I. Denmark won the best-of-three relegation series with a shootout win to preserve its spot in next year's main tournament. Jonas Rondbjerg (Vegas Golden Knights) scored in the first period and in the fifth round of the shootout to give Denmark the win.

"I’m happy about it and I'm also proud," Denmark forward and alternate captain Daniel Nielson said. "It's good for my country. It's so nice to see our country, when are so little, that we can stay in the elite division and keep fighting with the other teams in the top 10. It's awesome."

Meanwhile Kazakhstan earned a promotion to the 2019 World Junior Championship in Vancouver and Victoria, British Columbia, by winning the 2018 Division I-A tournament.