The Bills have qualified for the playoffs for the first time since the 1999 season. While Doug Flutie and Rob Johnson were embattled in a quarterback controversy, current members of the team were still in school, with the older players starting to think about college and the younger players more worried about kindergarten. Several players shared their memories of 1999, with fears of the Y2K computer bug being a common theme among them.

WR Zay Jones (born 3/30/95): ’99? So when we had the VHS tapes and all that stuff? I was born in ’95, so, I mean, I was very young. I would’ve been in Miami and Orlando at the time because my dad played for the Dolphins. So running around the Dolphins’ facility probably, being a rug rat, or at Disney World or something like that. … The coolest thing going on around that time … Hot Wheels were popping back then, Power Rangers were huge. You remember Power Rangers? Pokemon. Yeah, I’m gonna go with Pokemon. Pokemon was the s--- growing up. If you didn’t have Pokemon trading cards … and I think this was like when Gameboys came out. Gameboys were huge. 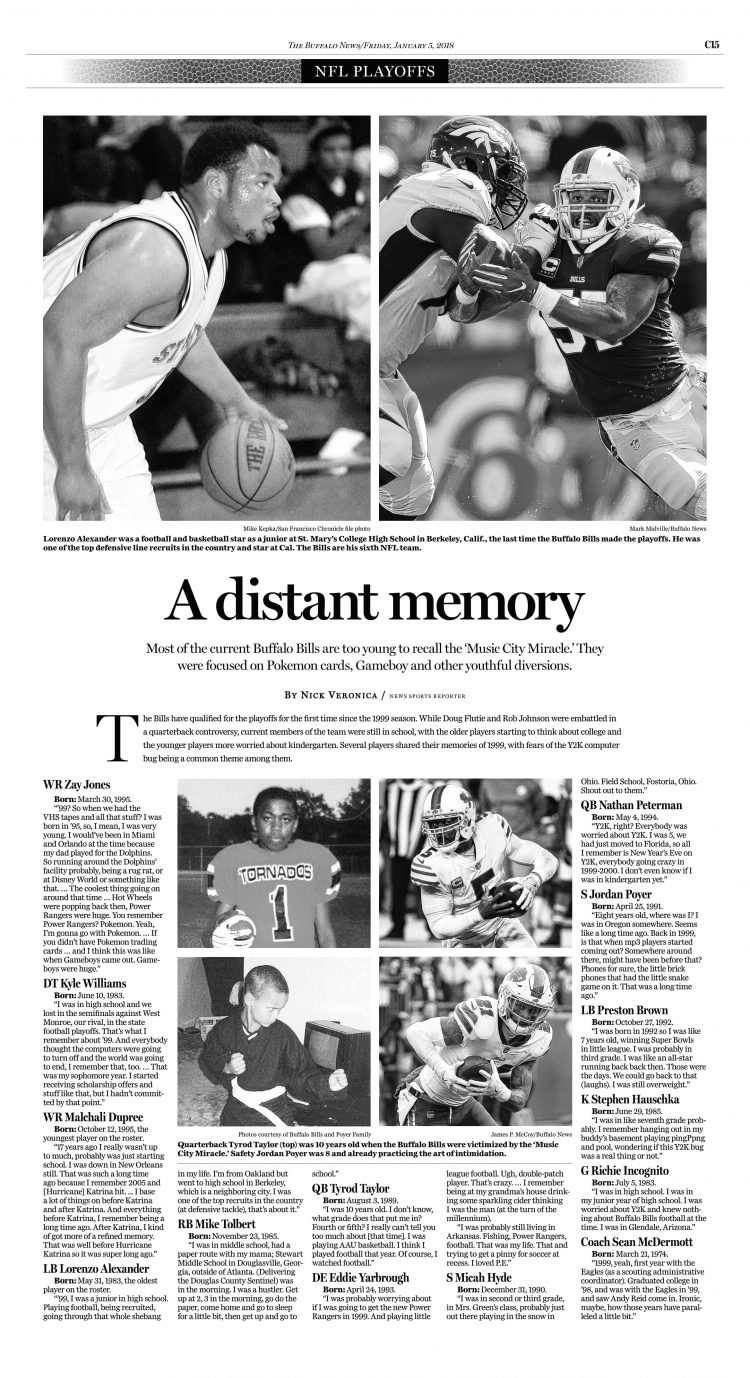 The News' page from the special playoff section features youth photos of Tyrod Taylor and Jordan Poyer. Click to expand.

DT Kyle Williams (6/10/83): I was in high school and we lost in the semifinals against West Monroe, our rival, in the state football playoffs. That’s what I remember about ’99. And everybody thought the computers were going to turn off and the world was going to end, I remember that, too. … That was my sophomore year. I started receiving scholarship offers and stuff like that but I hadn’t committed by that point.

WR Malchali Dupree (10/12/95, the youngest player on the roster): 17 years ago I really wasn’t up to much, probably was just starting school. I was down in New Orleans still. That was such a long time ago because I remember 2005 and [Hurricane] Katrina hit. ... I base a lot of things on before Katrina and after Katrina. And everything before Katrina I remember being a long time ago. After Katrina I kind of got more of a refined memory. That was well before Hurricane Katrina so it was super long ago.

LB Lorenzo Alexander (5/31/83, the oldest player on the roster): ’99, I was a junior in high school. Playing football, being recruited, going through that whole shebang in my life. I’m from Oakland but went to high school in Berkeley, which is a neighboring city. I was one of the top recruits in the country (at defensive tackle), that’s about it.

RB Mike Tolbert (11/23/85): I was in middle school, had a paper route with my mama; Stewart Middle School in Douglasville, Georgia, outside of Atlanta. (Delivering the Douglas County Sentinel) was in the morning. I was a hustler. Get up at 2, 3 in the morning, go do the paper, come home and go to sleep for a little bit, then get up and go to school.

QB Tyrod Taylor (8/3/89): I was 10 years old. I don’t know, what grade does that put me in? Fourth or fifth? I really can’t tell you too much about [that time]. I was playing AAU basketball. I think I played football that year. Of course, I watched football. It’s a long time.

DE Eddie Yarbrough (4/24/93):  I was probably worrying about if I was going to get the new Power Rangers in 1999. And playing little league football. Ugh, double-patch player. That’s crazy. … I remember being at my grandma’s house drinking some sparking cider thinking I was the man (at the turn of the millennium). I was probably still living in Arkansas. Fishing, Power Rangers, football. That was my life. That and trying to get a pinny for soccer at recess. I loved P.E.

S Micah Hyde (12/31/90):  I was in second or third grade, in Mrs. Green’s class, probably just out there playing in the snow in Ohio. Field School, Fostoria, Ohio. Shout out to them.

The Drought: How the Buffalo Bills went 17 years without making the playoffs

S Jordan Poyer (4/25/91): 8 years old, where was I? I was in Oregon somewhere. Seems like a long time ago. Back in 1999, is that when mp3 players started coming out? Somewhere around there, might have been before that? Phones for sure, the little brick phones that had the little snake game on it. I don’t know, that was a long time ago.

LB Preston Brown (10/27/92): I was born in 1992 so I was like 7 years old, winning Super Bowls in little league. So it’s been a long time. I was probably in third grade. I was like an all-star running back back then. Those were the days. We could go back to that (laughs). I was still overweight.

How much do Bills players get paid for their playoff game?

K Stephen Hauschka (6/29/85): I was in like seventh grade probably. I remember hanging out in my buddy’s basement playing Ping-Pong and pool, wondering if this Y2K bug was a real thing or not.

Now that the Bills made the playoffs, what team has the longest postseason drought?