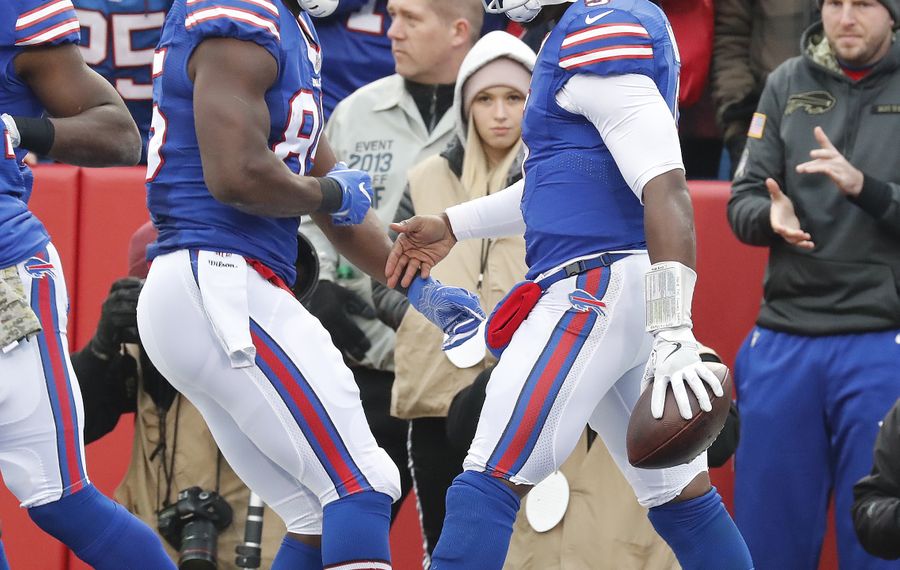 This is not meant to be a complaint, but rather a humorous story to start your Saturday morning.

My flight to Jacksonville on Friday night was delayed a couple hours in Detroit. No big deal. It happens this time of year with air travel in the Northeast, and it could have been a lot worse with what people in New York and Boston are going through.

Once we did get on the flight, it felt like we had been sitting at the gate for a long time before one of the flight attendants made an announcement. There would be another delay, he said, because one of the baggage handlers got his glove stuck in the cargo door while he was loading luggage. “It’s jammed in there pretty good,” the flight attendant said.

That required maintenance to come and free the glove. After that happened, we were on they way, arriving a little after 1 a.m. As you would expect, my flight was loaded with Bills fans heading south for their team’s first playoff game in 18 years. That comes Sunday at 1 p.m. against none other than Doug Marrone and the Jaguars. Let’s get to this week’s mailbag:

“TNFP69” asks: What are the three player moves they made this year that you didn’t like? These are the ones I list: 1. Letting Reggie Ragland go too early. 2. Keeping Mike Tolbert. 3. Not keeping RB Jonathan Williams, who could have helped all year long.

Jay: That’s a pretty solid list that you have, but I’ll offer some counter points. Ragland didn’t have a future on this defense. He was a third stringer at the time of being traded. Could the coaching staff had found a better way to utilize him? Perhaps. But it’s common when there is a scheme change to see that type of a roster move. Ragland is a 3-4 linebacker who specializes in stopping the run. Sean McDermott’s defense requires linebackers to have more speed, which is why I see them trying to upgrade the position this offseason.

As for the moves I didn’t like, I’ll start with the Kelvin Benjamin trade. The best I can give that so far is incomplete. Benjamin has been hurt most of the time he’s been here, but the fit with Tyrod Taylor seemed odd when the trade was made and nothing that has happened since to make me change my mind. It’s entirely possible General Manager Brandon Beane made the deal with the Bills’ next quarterback in mind, which makes a little more sense, but Benjamin will have to show that he can come back healthy in 2018. So far, trading a Day 2 draft pick for him hasn’t been worth it, but there is time for that to change.

I’ll agree on Tolbert. The Bills stuck with him as the No. 2 running back to LeSean McCoy far longer than I would have. Of course, if he has a big game Sunday in Shady’s absence, that will be forgiven.

No. 3 would be not starting Matt Milano at linebacker sooner. The ball just seems to find the rookie linebacker when he’s in there. I would have made the move to promote him over Ramon Humber right after the back-to-back home games against Tampa Bay and Oakland.

Rick McGuire asks: I haven't seen this much excitement surrounding the Bills since the comeback game vs. the Oilers back in January 1993. That team rode momentum all the way to Super Bowl XXVII. Any chance it could happen again? Their confidence is extremely high and the adrenaline is pumping fast.

Jay: A bunch of us in the media room have talked all week about how we can’t shake the feeling the Bills can pull off the upset Sunday. On the surface, that doesn’t make much sense. The Jaguars are the statistically dominant team. Their strengths match up very well against the Bills’ weaknesses. Consider: Jacksonville ranks No. 1 in the NFL in rushing, while the Bills are 29th defending the run. The Jaguars’ pass defense also leads the league, while Buffalo is 31st throwing the ball.

That explains why the Jaguars are 8.5-point favorites. All that being the case, though, the X-factor is Jacksonville quarterback Blake Bortles. Trusting him in the postseason has to give Jaguars fans the chills. An upset for the Bills will start with winning the turnover battle.

If they pull it off, can they go on a run? I wouldn’t predict with a trip to New England looming. As long as Brady and Belichick are there, I’m not picking against them. But, hey, there might even be good news on that front for the Bills after ESPN ran a story that set the Patriots’ empire might be crumbling from within.

Raymond Collado asks: Who do the Bills start at QB?

Jay: I’d be shocked if he didn’t at least try to play. He didn’t have a walking boot on at any point that the media saw during practice or in the locker room afterward. He declined an interview request Friday (he spoke Thursday), but seemed to be in good spirits, joking with reporters that “you know I don’t talk Fridays. Wish us luck.”

McCoy has worked for this moment since coming to Buffalo. As long as he’s not at risk of making his injury worse, I fully expect him to give it a go.

Paul Catalano asks: Do our coaches open the playbook on offense to try and beat the defense?

Jay: That would be my plan, for sure. Without McCoy, or with him at something less than 100 percent, the Bills have to find a way to get the running game going. Give me Tyrod Taylor leading the college option. Give me a reverse to Brandon Tate. Give me the Wildcat with Joe Webb.

It’s now or never for offensive coordinator Rick Dennison, so why not get to some pages of the playbook that haven’t been featured this year?

Tim Lowden asks: Is there a chance Marcus Murphy will return some kicks? It doesn’t seem like Brandon Tate has done really much of anything all year and I feel like the staff has to be assessing options to bring life to the return game.

Jay: Timmy Obit! Since nobody likes an inside joke, Tim and I worked together at the Tonawanda News, where he handled the obituary page. Hence, the nickname. We don’t get to watch practice right now after stretching and the individual drills, but I’d be surprised to see Murphy in that role. The only way I’d feel comfortable with it is if McCoy was 100 percent, and I don’t think he’ll be anything close to that. Murphy will have a greater value Sunday as a running back.

Your point about Tate is a good one, though, as the Bills rank 24th in kickoff return average this season. That’s an area that I would expect they look to upgrade in the offseason.

Alex M. asks: When players receive bonuses for making the Pro Bowl or advancing in the playoffs, does it go against the salary cap?

Dave Fullone asks: Does Seantrel Henderson see more of the field this week? Seems he did OK in replacing Jordan Mills.

Jay: Not unless Mills’ ankle injury is bothering him. Mills was lined up with the starters this week during practice and looked to be moving pretty good in the limited amount of time reporters get to see. For what it’s worth, the analytics website Pro Football Focus has Mills as its lowest-graded member of the Buffalo offense. The Bills’ coaching staff clearly feels better about him, though, since he played 97 percent of the offensive snaps.

Brendan Sweet asks: Do you think Marrone will punt on fourth and 1 from the Bills' 38-yard down 4 with 6 minutes left in the game this Sunday? #saintdoug

Jay: Wouldn't that be something? Bills fans would sign up for that, but I have a warning: They need to hope Sean McDermott doesn't punt in the same situation. He hasn't exactly proven to be a riverboat gambler in his first year on the job. We joke about Marrone, but McDermott is just as conservative.

“Ron Mexico” asks: Why does Andy Dalton have such a stupid haircut?

Jay: How dare you insult the Bills’ latest Wall of Fame member? Are you going to complain about Dalton’s hair on the statue of him outside New Era Field?

Brad Hulshoff asks: So where should we hide for the nuclear war? Do we build a bunker?

Jay: *Closes Twitter* Thanks, everyone, for the questions this week! Enjoy the playoffs.