This is an acknowledgement, up front. A few days ago, after the Buffalo Bills officially made it to the National Football League playoffs for the first time in 17 years, I wrote a column asking readers to tell me what that moment meant to them.

Whatever I expected, the response went beyond it. I received a digital Niagara of notes, letters and  messages. The passion in many of these replies was compelling.

I wish I could include all of them here.

There were letters from teachers, thrilled that their students will "finally experience what so many of us did in our own youth," in the words of Jill Morgan of Lake Shore Central in Angola, who has a standing buffalo tattooed on her ankle.

There were letters from widows and widowers thinking of their spouses, such as Loretta Kaminsky, 81, who remembers "cheering every game through rain and yes, snow," going back to the days of the old War Memorial Stadium.

Kaminsky's husband, Allan, died four years ago. When Cincinnati scored the dramatic touchdown Sunday that beat Baltimore and put Buffalo in the playoffs, Kaminsky's "phone went crazy with texts from my grandchildren."

She was sure, she wrote, that her husband is "jumping up and down as he did so many times, and sending winning vibes to our wonderful Bills."

There was a promise from Nancy Kelleher, who said the game renewed a dream.

Someday, she said, the Bills will win a Super Bowl, and she'll put a commemorative flag on the grave of her father, Stanley Kozlowski, a Black Rock butcher who kindled her fierce devotion for the team during her Cheektowaga childhood.

She has faith. Whether it's this year or some season in the near future, returning to the playoffs is simply the first step before it happens.

There was a note from the Rev. Jud Weiksnar, pastor of Ss. Columba and Brigid Church in Buffalo. He recalled how he was once stopped by a masked gunman in the middle of the night in a dangerous neighborhood, amid an outbreak of lethal terrorism in Peru.

"I remember the last thing I thought," he wrote. "It wasn't, 'I wish I could see my mother and father one last time,' or 'I don't want to die so far away from home.'

"It was, 'God, I only wanted to see the Bills win one Super Bowl before I died.' "

The gunman turned out to be a police officer. Weiksnar still has his chance.

Readers, in joy, disbelief, even tears, on Bills ending The Drought

All these responses are collected in a separate archive available here, and I'm deeply appreciative for every message. If there is one shared element, they all seem to invoke the emotion described by Janice Childs, a teacher in Kendall in Monroe County who turned 42 this week.

Her 17th birthday was the day of the great Bills comeback against the Houston Oilers, a quarter-century ago this week. Her parents took her to the game as a birthday gift.

She remembers how her family stayed even as thousands of people abandoned ship, with the Bills far behind.

She remembers how she banged her leg so severely, amid the excitement of the rally, that she had to be treated by first-aid workers.

What she remembers, beyond all else, is the moment when kicker Steve Christie lined up in overtime for the game-winning field goal, and everyone in the stadium joined hands. It was an electric instant, the purest manifestation of what much of the region experienced Sunday when the Bills made it back in.

Sean Kirst: Despite the hurricanes of life, this Bills backer says she's lucky

Mike Esposito, a history teacher in Niagara Falls, had his own instantaneous reaction. He described how "my five kids, my wife and my mom (were) jumping around the living room like they just won the lottery."

Still, Esposito stepped aside to send a text to Dr. Adria Condino, the sister of a guy named Dean Condino, Esposito's best friend in high school.

"Thinking about Dean," he wrote. "I bet he is smiling in heaven." 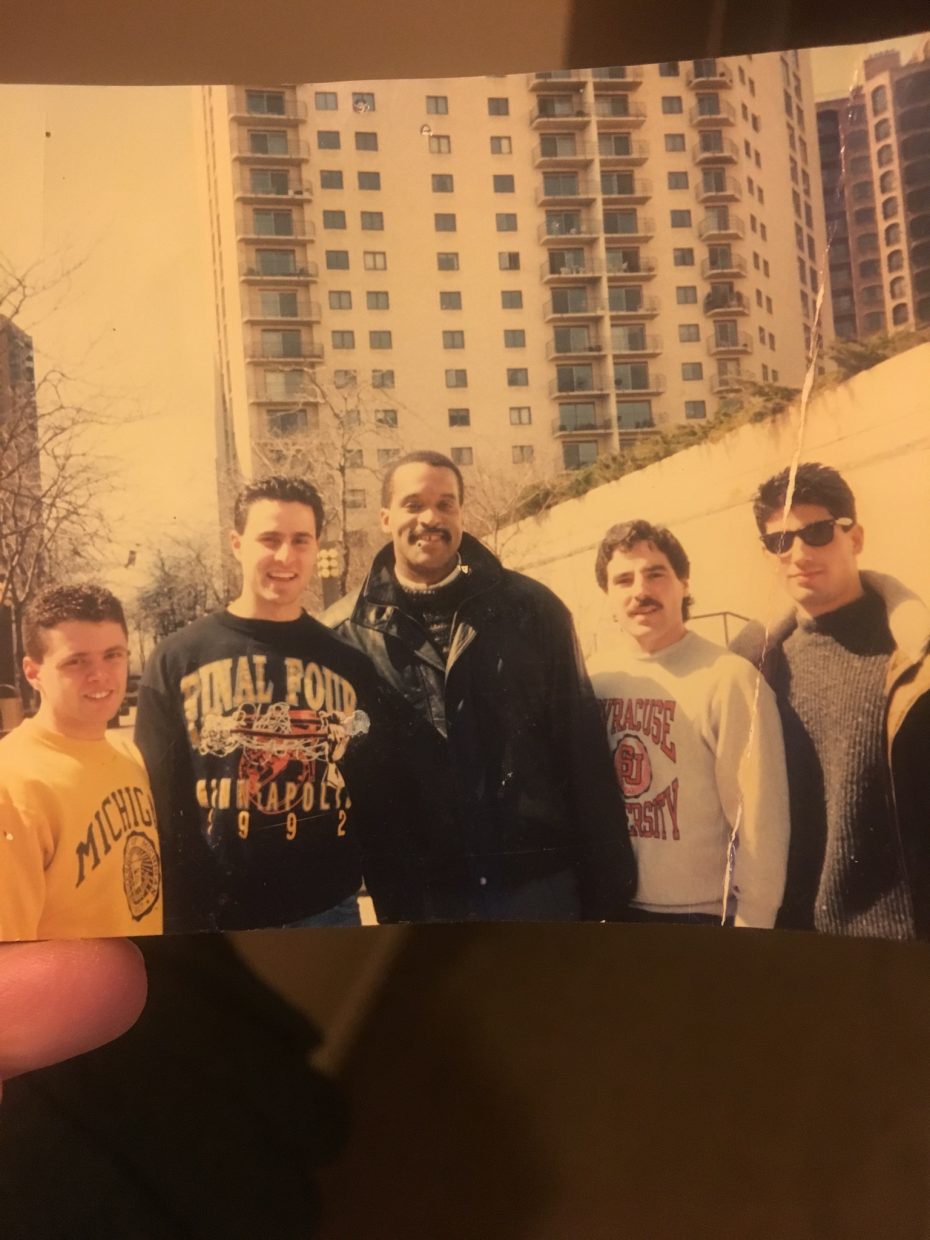 In the 1980s, Esposito and Condino were teammates on a Niagara Catholic football team coached by Rich Condino, Dean's uncle. The teens were passionate Bills fans who listened to the 1987 NFL draft while in, yes, a high school religion class. They'd often crowd into the car with their buddies for a ride to the stadium in Orchard Park, where they could spend less than $15 for tickets that made them witnesses as the Bills went from awful to awfully good.

Esposito and Condino were together at the American Football Conference championship game of 1990, celebrating as the Bills won 51-3 and finally headed to a Super Bowl.

"It was unreal," said Esposito, who hopes his own kids someday have a notion of how it felt.

Condino did all this while coping with a congenital heart problem.

"He never complained," Esposito said. "He did everything, despite it."

Condino died in 2000, the same year the playoff drought began.

As soon as Esposito was sure that span over, he fired off the text. 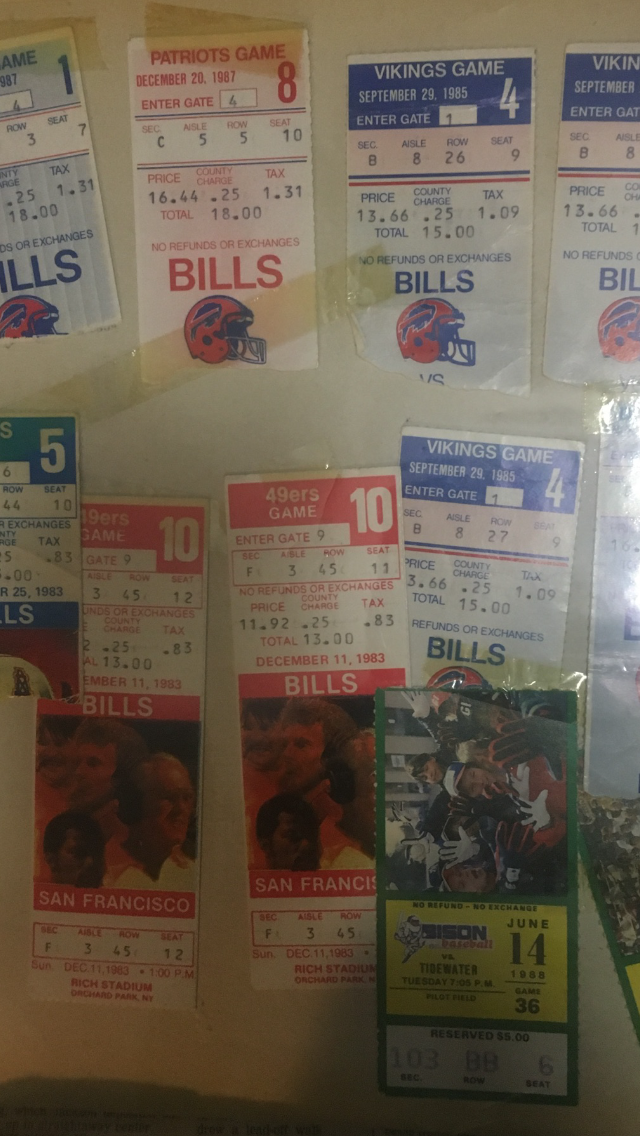 The moment had similar intensity to Ezra Castro, 38, in Dallas, Tx. He was born in El Paso. When he was a little boy, his father told him it was time to choose a favorite team. Castro is Mexican-American and proud of his heritage, and he went on a childhood search for uniforms that offered the colors of either the American or Mexican flags.

Mexico was out. There were no teams in red, white and green. For Castro, the choice came down to the Bills or Patriots.

He not only turned into a Bills fan, he soon became a legendary one.

Castro, who works as a mortician, uses a bright costume to transform himself before each game into "Pancho Billa." He is the president of the combined Bills Backers groups in Dallas/Fort Worth, whose membership has grown to about 700 under his watch, loyalists who gather every week for the games either at the Hideaway Bar & Grill in Dallas or at Buff Bro's, a tavern in Fort Worth.

He also travels each season to five or six games around the country, including the home opener in Buffalo. Castro was in New York last autumn for the Thursday night game against the Jets. During a visit to the Statue of Liberty, he noticed a nagging problem had grown even worse. His left arm had gone entirely numb.

Back in Texas, he went to a doctor, expecting to learn the cause was something as simple as a pinched nerve.

Instead, Castro heard "the worst news of my life."

He had a mass wrapped around his spine, cancer that had spread to his liver, lungs and lymph nodes.

The doctors wanted to operate quickly, but Castro had something he needed to do first. He took his 5-year-old son Ginobili — named for the longtime star of basketball's San Antonio Spurs — to the Bills-Chargers game in Carson, Calif. Ginobili, called "Panchito" by his dad, wore a costume of his own. 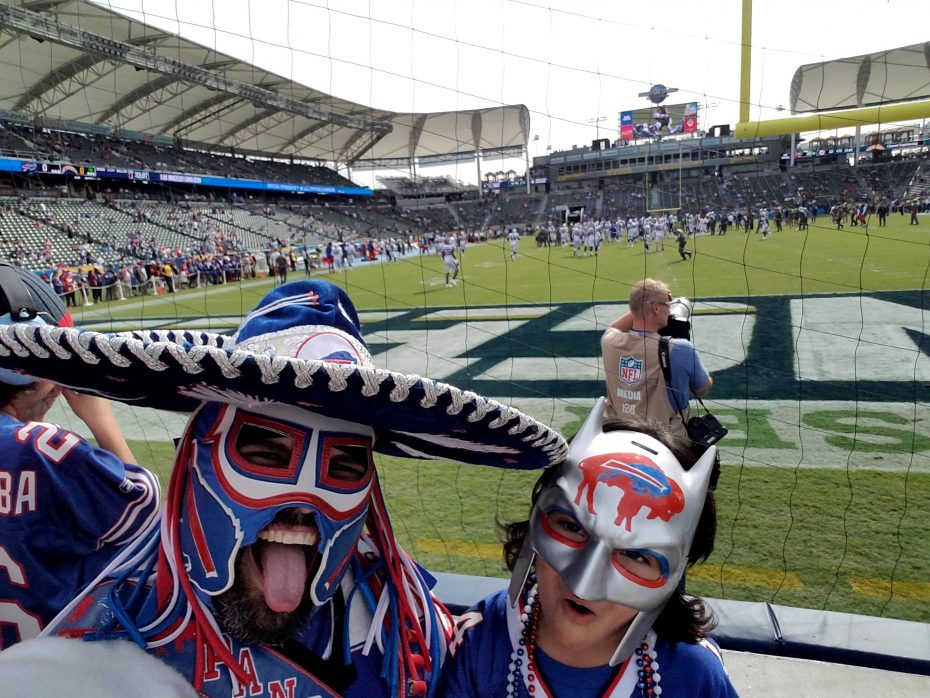 "I don't know if that's the last Bills game I will ever see or not," said Castro, who had to pause to collect his composure while recalling that day. What matters, he said, is the way his son said to him afterward, "Dad, I loved every minute of that game," how Castro is sure Ginobili will remember the trip with his father for the rest of his life.

On Dec. 13, Castro had the surgery. The doctors removed the mass, and he said they used cadaver bones to replace two weakened portions of his back. For the first time in as long as he can remember, Castro — at one point still physically incapable of leaving his bed — was unable to join other Bills fans in watching two Buffalo games in a row.

Yet he was at the Hideaway Sunday, for the Miami game. He wore a neck brace and he began crying as soon as he walked in the door, when the entire place — friends who have supported a GoFundMe account on his behalf — rose in a sustained standing ovation.

Castro said he somehow knew the Bills would find a way into the playoffs, and he was confident they would defeat the Dolphins.

Still, even the legendary Pancho Billa could not anticipate the magical way that Cincinnati would shock Baltimore, to make it happen.

So Castro, at his table at the Hideaway, wept again, with many in the tavern sharing his tears.

The Bills themselves, he said, may never fully appreciate the power of their success.

"I cried in joy and happiness," he said, "because for that one moment, they took the cancer away."

Fans in Mexico put their deep love of Bills on display