There a good chance there will be an upset or two on wild-card weekend in the National Football League playoffs. In the 15 seasons since the present NFL playoff format was instituted, the higher seed or home team has won 56.7 percent of the time. Last season all four of the home teams won, but in the 2015 season, all four lost the wild-card games.

Where could an upset occur? The liveliest underdog in Saturday's games appears to be the Atlanta Falcons at the NFC West champion Los Angeles Rams in the first NFL postseason game in the L.A. Coliseum since the 1993 L.A. Raiders. The Falcons squeezed into the playoffs Sunday by defeating the Carolina Panthers, but they are, after all, the defending NFC champions.

The Kansas City Chiefs, who overcame a puzzling midseason slump, recovered to easily capture AFC West title and the No. 4 seed in the AFC. The Chiefs will take on an unimpressive Tennessee Titans team that made it to the playoffs in a tiebreaker scenario involving the Bills, Los Angeles Chargers and Baltimore Ravens.

A capsule look at Saturday's games:

TV: ESPN, 4:35 p.m.
The line: Chiefs (-9)
The scoop on the Titans: Word was that coach Mike Mullarkey's job was on the line before Tennessee won a defensive struggle against division-rival Jacksonville last Sunday to make the postseason. ... Running back DeMarco Murray will miss the game with a knee injury, but the Titans still have former Heisman Trophy winner Derrick Henry to carry the ball. QB Marcus Mariota had an erratic season. His passer rating was only 79.3, lowest among the eight starting signal callers in this week's games. Favorite target is tight end Delanie Walker with 74 receptions. ... Aside from the Bills, Tennessee was the least impressive, statistically, of the 12 playoff teams. The Titans ranked 23rd in offense and 13th on defense. Only Tennessee and Buffalo did not rank in  the top 10 in offense or defense. ... S Kevin Byard tied for the NFL lead with eight interceptions. ... Grand Island native Brett Kern led NFL in gross (49.7) and net (44.3) punting averages, but did not eclipse Sammy Baugh's record 51.7 average.
The scoop on the Chiefs: Kansas City finished the season with four straight wins after a four-game midseason losing streak. The Chiefs began 5-0, including wins over No. 1 seeds New England and Philadelphia. The last three seasons, KC is 16-2 versus the AFC West. ... QB Alex Smith led the league with a 104.7 passer rating. He passed for 4,042 yards with 26 TD passes and only five INTs. Rookie RB Kareem Hunt led the league with 1,327 yards rushing. He averaged 4.9 yards per attempt and ran for eight touchdowns. Offense had season-low 236 total yards in home loss to Bills. ... Tight end Travis Kelce led the team with 83 receptions for a 12.5-yards average and eight touchdowns. The most explosive Chief is WR-return man Tyreek Hill, He had six receptions for 50 yards or more and was seventh in the league with 1,183 receiving yards. ... Helped by the crowd noise at Arrowhead, the Chiefs historically are famous for their pass rush. However, they had only 31 sacks while giving up 38.
Outlook: Defense is the Chiefs' questionable area, but Tennessee doesn't seem capable of taking advantage on the road. Kansas City 24-13, bringing coach Andy Reid's career record to 12-12 in postseason games.

TV: NBC, 8:15 p.m.
The line: Rams (-6).
The scoop on the Falcons: Despite making the playoffs, they were a disappointment this season following last year's NFC championship and infamous Super Bowl collapse. Atlanta was considered the best-balanced team in the league going into the season and did rank eighth on offense and improved to ninth on defense. ... Part of the disappointment was due to so-so season by QB Matt Ryan, who passed for 4,095 yards but had only a 20-12 TD-INT ratio. Also, injuries that cost some key players, including OLB Vic Beasley, playing time were factors. Beasley had 15.5 sacks in 2016, but didn't make the top 50 in the league this season. Despite that, Falcons had a 39-25 sack advantage, including 9.5 by DE Adrian Clayborn. ... Pro Bowl WR Julio Jones had 88 pass receptions but only three for TDs. RBs Devonta Freeman and Tevin Coleman provide depth and versatility at running back. 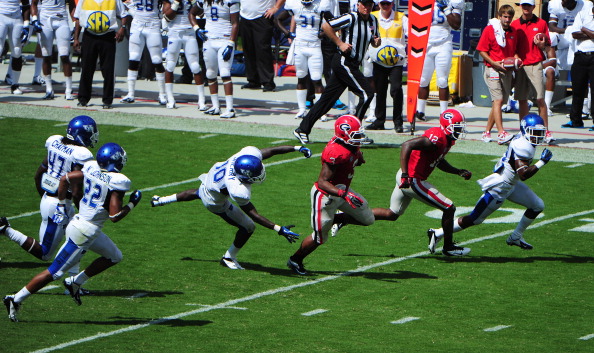 Todd Gurley made his college debut against UB on Sept. 1, 2012, and scored three touchdowns, including this 100-yard kickoff return. (Getty Images)

The scoop on the Rams: Los Angeles improved from 4-12 to 11-5, which is why rookie head man Sean McVay was named NFL Coach of the Year. Also the Rams were highest-scoring team in the league, getting a tremendous sophomore season out of former No. 1 draft pick Jared Goff (3,804 yards, 28 TDs, 100.5 rating). Improved receiver corps with the addition of former Bills Robert Woods and Sammy Watkins and productive rookie Cooper Kupp (62 receptions) helped. However, the offense revolves around RB Todd Gurley, who was second in the league in rushing yards (1,305) and first with 2,093 scrimmage yards. He had 13 rushing TDs among his league-leading 19 scores. ... L.A. has most dangerous return game in the league with Pharoh Cooper, who ranked second on punts and first (27.40) on kickoffs. Also, punter Johnny Hekker was second in the league in net average (44.3).
Outlook: After 7-2 start, Rams were 4-3 down the stretch but were impressive in polishing off Seahawks on the road to take charge of NFC West. Former Georgia Bulldog Gurley will need a good game against Atlanta defense that gave up only 104.1 per game on the ground. Rams, 30-21.