Kevin O'Brien started an unwelcome collection of cheater glasses in his 50s when he started to struggle to read, scan his emails and text messages, and handle some of the small instruments he uses at work.

He propped cheaters on his head, hung them in his shirt pockets, and set them on his desk, nightstand and dashboard of his Jeep.

"They were everywhere," said O'Brien, marketing director and certified ophthalmic surgical technician with Fichte, Endl & Elmer Eyecare. "I was very good at distance but when I was working in the operating room, sometimes I had to put on glasses to be able to see some of the surgical tools.

"You get to a point where you're afraid to go to a restaurant if you don't have them. When the phone rings, you're squinting to see it. You're just chained to them and that's no way to be."

O'Brien, 60, of Wheatfield, tossed all of his cheaters last summer after an inlay was placed into his non-dominant left eye to reshape the cornea and improve his near vision.

Dr. Michael Endl performed the 15-minute Raindrop Near Vision Inlay outpatient procedure, which involved using a laser to create a thin flap on the cornea, lifting the flap and inserting a clear, tiny hydrogel lens – similar to a mini-contact lens – over the center of the pupil. The flap was then closed without the need for even one stitch.

O'Brien was able to drive and work within a couple of days, though it took about a week for him to adapt to counting on one eye for distance vision and the Raindrop-assisted eye to more clearly see up close.

The procedure has been available in Western New York for a little more than a year. Endl and one of his partners, Dr. Thomas Elmer, became the first ophthalmologists in the Northeast to offer the Raindrop inlay, at the request of the manufacturer, ReVision Optics.

LASIK surgery, for roughly a generation, has helped millions of those mostly under 45 correct for distance vision challenges and shed glasses and contact lenses, Elmer said. Those over 60 have long been able to rid themselves of cataracts through laser surgery. 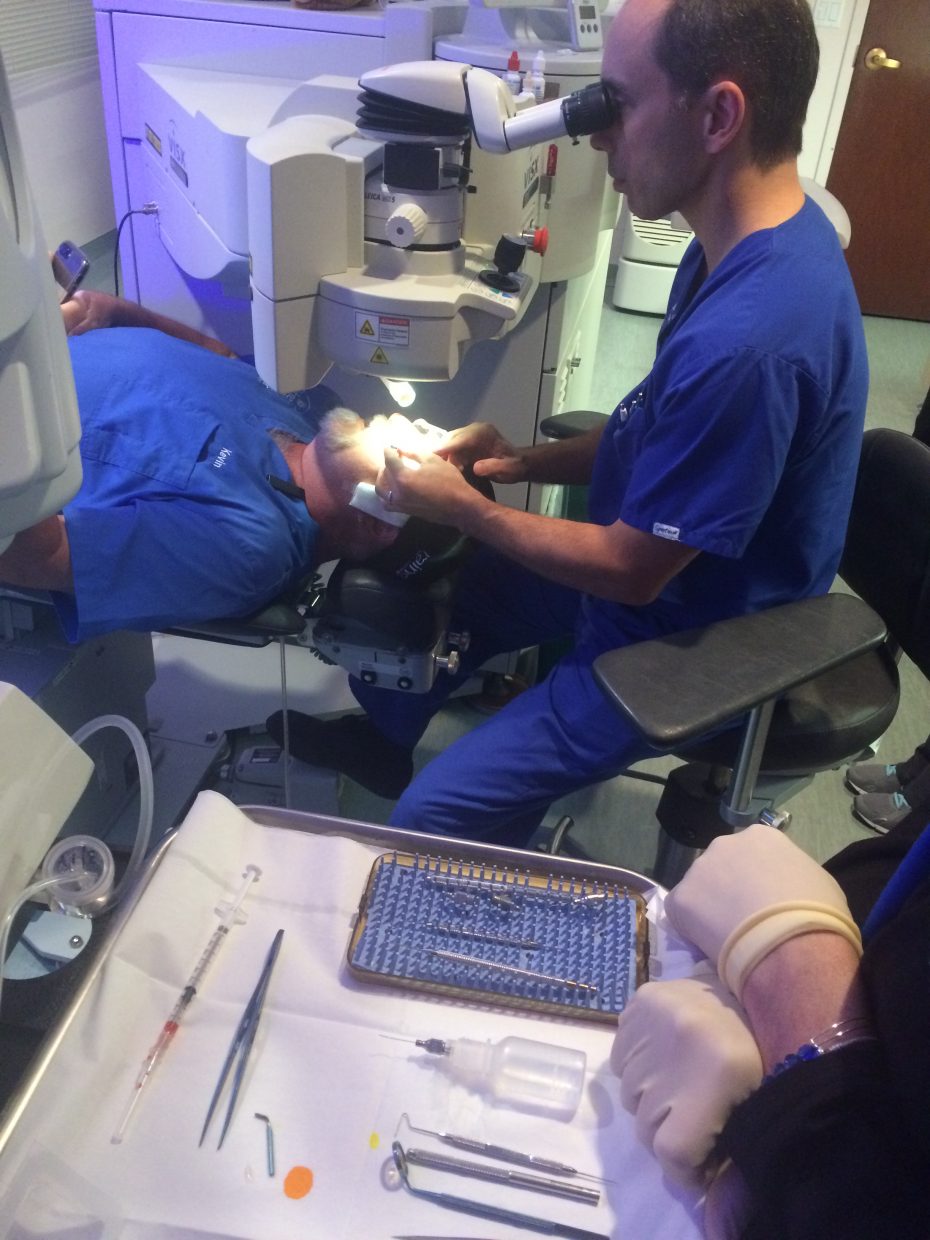 The new inlay is a great advancement for people between those two age groups who can see fine at a distance but deal with blurriness up close, the two doctors said. The procedure also is reversible, Elmer said.

“We can do this in the office, quickly and easily, and we didn’t have to learn a new procedure because it’s similar to LASIK,” he said. “Now, thankfully, we can also do LASIK combined with Raindrop and get you to the perfect distance but also add the near.”

The elective procedure costs $3,500 and is not covered by insurance. The practice, which has offices in Amherst and the Town of Niagara, is in the midst of a research study and until March 31 can provide a discount of up to $1,500 for participants who can benefit from the inlay. If LASIK also is needed, it can be done at no additional cost. Find out more by calling 564-2020 or visiting fichte.com.

Endl and Elmer are both Western New York natives in their late 40s. Endl lives in Getzville with his wife, Mara, an attorney, and their three daughters; Elmer on Grand Island with his wife, Kristina, a chiropractor, and their young son and daughter.

The two doctors attended medical school at the University at Buffalo and served as chief residents in the world-renown ophthalmology program at Louisiana State University in New Orleans before returning home nearly two decades ago. They have since performed thousands of laser eye surgeries. O'Brien has assisted on most of them.

Q. Aging isn't easy on the eyes. Can you talk about presbyopia? How common it?

Endl: Universal. You have two lenses on your eye: that clear lens on the front, called the cornea, that goes over the colored part of your eye. The natural lens sits right behind the color of your eye and is M&M candy in shape. When you're born, it's crystal clear and spongy. Right about the age of 43 to 45 – give or take a few years – it starts to lose its flexibility and people start to say, "My arm's not long enough (to read something I hold in front of me). Sometimes, I'll tell patients, "Your diagnosis is birthdays."

Elmer: We were first in the Northeast allowed to do the Raindrop in October 2016 but it was limited to those who had good distance vision but needed readers for near vision. Now, thankfully, we can do LASIK combined with Raindrop and get you to the perfect distance but also add the near.

Q. Are the lenses all the same or different?

Endl: They went through research to try to find the optimum size.

Elmer: The implant itself is the same, but we'll use our lasers to get people to where their distance is excellent. One of the things that's great to know is that the inlay will still work after cataract surgery and as you age.

Q. How do you make sure someone is a good candidate?

Endl: We do a test drive. We make sure your eye health – based on maps at the front of the eye, a dilated exam on the back of the eye – is fit for any elective surgery. Then we say, "Let's simulate a little bit what this will look like and see what you think." We can do that with a contact lens for an hour or for a couple of days. We want patients to feel comfortable. A lot of these folks have never put a contact in during their lives because they never needed any distance correction. We can put it in and take it out for you.

Elmer: We're not opposed to bifocal contacts. If you come and do this and say, "These contacts are really great, can I just buy some of them?," sure you can.

Endl: Usually, after a period of time, the contact isn't as good as the surgery.

You won't believe your eyes!!! 👀👀👀Kevin's going live during his very own Raindrop procedure!!! 😱😱Turn on your sound 📢📢

Q. Where will those who get the inlay see the greatest benefit?

Elmer: Being able to read without glasses.

Endl: They'll keep their depth perception and still be able to drive.

Q. You're a full-service ophthalmology office, including for pediatrics. Have either of you undergone any of the eye procedures you perform? If so, which, and who did the surgery?

Endl: I've operated on all my family members.

Elmer: And my mom.

Endl: Dr. Elmer and I are both slightly near-sighted and don't need readers but we're knocking on the door. Dr. (Claus) Fichte has had refractive surgery and has been delighted with it.

Q. How can people best protect and preserve their vision, regardless of their age?

Elmer: A lot of stuff is just age and you can't correct that, but a healthy lifestyle that is good for the body is good for the eye. Get a good eye exam and make sure your eyes are OK.

Endl: Every year if you have diabetes and every two years if you don't. Also, researchers think that exposure to UV light for many years might lead to earlier cataracts. Almost all, even inexpensive, sunglasses have at least some UV protection. There are studies that when you're older certain antioxidant vitamins can prevent aging to the back of the eye. If you have macular degeneration it keeps it from getting worse. What's the worst thing you can do for yourself? Smoking. Smoking is bad for everybody. Don't smoke, eat leafy vegetables and get eye exams.