The Buffalo Sabres' midterm analysis was the most fun I had writing a story last season. Based on the classic movie "Animal House," it was filled with awards, quotes and, according to the feedback, smiles and memories.

So let me apologize right away. This isn't like that.

This year's edition of the Sabres fails to inspire the same creativity.

Best friends and strangers routinely ask me about the team. Until the Sabres' recent 4-3-5 "surge," I had the same answer at the ready.

This was the worst team I'd ever covered.

That was saying a lot. There was fierce competition for the lowly title:

* I started in 2002-03 when the team was bankrupt and without an owner. Average attendance fell to 13,776. Players weren't getting paid. Relocation wasn't out of the question. The fire sale included fan favorite Rob Ray and captain Stu Barnes. The team finished 26th out of 30, winning 27 of 82 games.

* The 2013-14 club finished last overall with 21 wins. Ron Rolston was as lost in front of a microphone as he was on the bench. The Sabres said goodbye to Thomas Vanek and hello to Linus Omark. The unexpected return of Pat LaFontaine and Ted Nolan created excitement, though it was short-lived as LaFontaine was banished despite having his number in the rafters.

* The 2014-15 edition was simply horrible. The scoring differential was minus-113. The Sabres were outshot by 1,789 at even strength. They lost 14 straight games in regulation, failing to earn a single point in January. But at least that was the plan. It was intriguing to see if the Sabres could finish last, thereby guaranteeing Connor McDavid or Jack Eichel. They did, winning 23 of 82 games.

So for this team – a playoff hopeful – to be the worst ever was almost inconceivable. Yet in the opening half of the season, the Sabres went for it.

They won just six of the opening 27 games. They got shut out in three straight for the first time in history, highlighting the offensive ineptness that has seen them score two or fewer goals in 27 of their 41 games. The power play dropped from first to 30th. They're on pace for 20 wins with a 10-22-9 record.

Worst of all, few people seemed to care. Many players appeared to be going through the motions. The fans responded in kind. A sea of empty seats has accompanied the abundance of slow starts. 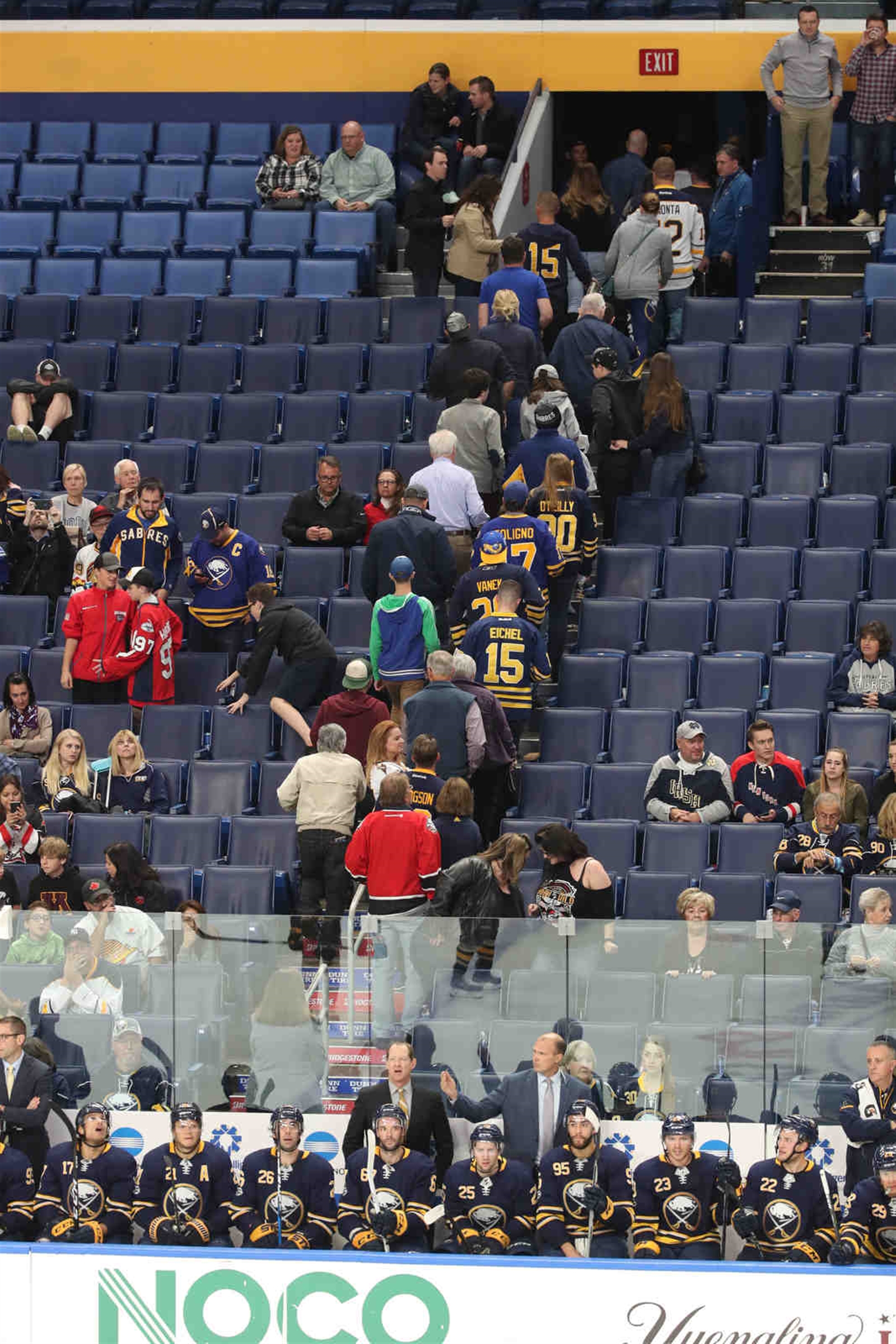 Fans have had little problem turning their backs on the Sabres. (James P. McCoy/News file photo)

If forced to reference pop culture for this year's midterm report, I'd recognize the return of "The X-Files." Two of the show's famous quotes would fit:

When the Sabres open their mouths, all many fans hear is, "Blah, blah blah, blah blah." The honeymoon was short for coach Phil Housley and General Manager Jason Botterill. There was no leash extended to the underachieving players. Faith has dwindled regarding longtime prospects.

Inside the Sabres: 'Next Chapter' is scary story

The Sabres are lucky that attendance is now done in tickets sold rather than actual fans. The real numbers might rival the pitiful showing for the bankrupt team. As it is, Buffalo is averaging 17,897 tickets sold for its 19,070-seat arena. That capacity of 93.8 percent ranks 23rd of the NHL's 31 teams.

Rightfully so, a large number of fans are in show-me mode.

Give credit to many season ticket-holders. Night after night, they show up. They head to the rink bubbling over Casey Mittelstadt and debating whether to trade Evander Kane. And they sit in the arena knowing full well that A) the team will probably lose, and B) the person sitting next to them either got his seats for free or paid as little as $6.

So, yeah, it's been a tough opening half for almost everyone. It could be argued it's been the worst ever.

Still, it took him a while to get going. The same fans who were ecstatic about his eight-year contract extension were questioning the $80 million commitment. He opened with eight goals in 32 games, putting him on pace for just 20, and he had lackadaisical moments. Eichel hasn't been a consistent game-changer, but he's Buffalo's No. 1 option.

* Evander Kane – The left winger's start was unreal. He scored 12 times in the opening 21 games, putting him on pace for 47 goals. A recent run of missed breakaways and two-on-ones showed it was unsustainable, but he's still on track for career highs in goals (32), assists (38) and points (70).

Kane will be one of the most intriguing players in the NHL during the second half as Buffalo fields trade offers for the pending unrestricted free agent.

* Phil Housley – The face he displays in public doesn't always sit well with beleaguered fans. The coach is rarely animated on the bench. His opts to focus on the positive during postgame news conferences, even after lopsided losses.

Practice days are different. There's fire, teaching and, if needed, profanity. He stops drills when the players mess up or lack interest. He rattles off advanced stats and trends. Housley knows what is going on. The players just don't take the instruction from the whiteboard to the white ice.

* Sam Reinhart – If he were a fourth-round pick, his on-pace stats of 14 goals, 12 assists and 26 points for the season might suffice. But he was a No. 2 overall pick who averaged an assist per game in juniors. His numbers don't work.

Six of his 13 points have come on the power play, meaning he generates little at five-on-five. He's traveled from the first line to the fourth, making few contributions along the way.

* Kyle Okposo – He'll be the first to say this has been a forgettable start to a season and a contract (second season of a seven-year deal). It took him 11 games to score, and he's on pace for 12 goals. If he maintains this rate, Okposo's 39-point output will be his worst full season since his rookie year of 2008-09.

Inside the Sabres: Moulson, Leino duke it out for title of worst contract

* Rasmus Ristolainen – The defenseman said the plummeting power play is his fault since he quarterbacks the unit. He led the Sabres with 25 power-play points last season. He has five this year.

After totaling 45 points last season, Ristolainen is on pace for 32.

* Chad Johnson – Neither he nor No. 1 goaltender Robin Lehner gets much help from the league's lowest-scoring team. But of the 56 goalies who've played at least 10 games, Johnson is 54th in save percentage (.883) and goals-against average (3.71). He has won one of his 11 decisions after going 22-16-4 in Buffalo two seasons ago.

* Johan Larsson – The forward has helped the penalty killers dominate at home, where they rank third in the NHL at 90.2 percent. But when he's on the ice at five-on-five, the Sabres have scored seven goals and allowed 21. That's a team-worst goal differential of minus-14.

They've still got the second half of the season. It will show who should be like Daniel Briere and Brian Campbell – pieces of that terrible 2002-03 team who eventually helped turn the organization around – and who will fade away like Milan Bartovic and Radoslav Hecl, footnotes of a team that couldn't win or capture people's imagination.