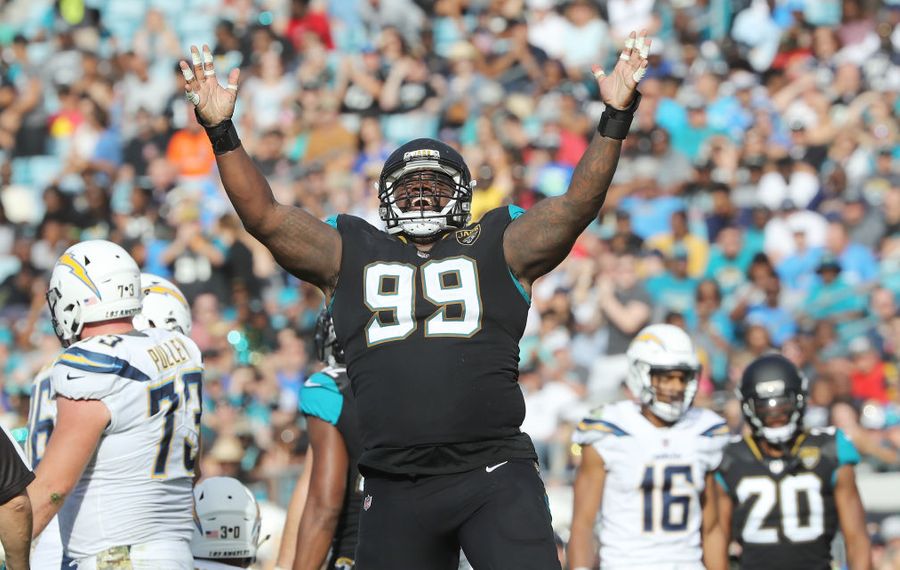 JACKSONVILLE, Fla. — Marcell Dareus smiled and knowingly nodded his head while he listened to the question.

Did part of him regret not being involved in what the Buffalo Bills experienced Sunday night?

His words, however, were dutiful.

Dareus replied the way you're supposed to when standing in front of a Jacksonville Jaguars locker stall at Everbank Field, where his current team will play his old team Sunday in the playoffs.

Buffalo on Oct. 28 traded Dareus and his gargantuan contract for a conditional sixth-round draft choice that became a fifth-round selection after the Jaguars made the playoffs and Dareus remained on the roster. The deal ended a controversial Bills career that included benchings, arrests and suspensions.

Bucky Gleason: Bills bracing for Dareus at his best

Dareus isn't a regular starter on Jacksonville's defensive line, but he has been an increasingly larger presence each week. His lone start and only sack came in the season finale against the Tennessee Titans.

He then stayed up all Sunday night and deep into the wee Monday hours to text his ex-teammates and watch the celebration videos. He stared wistfully at his phone and watched them rejoice while Cincinnati Bengals receiver Tyler Boyd — on a fourth-and-12 play in the final minute — scored a 49-yard touchdown to hand the Baltimore Ravens a defeat the Bills needed to end a 17-year playoff slump.

"I'm just happy they got over the hump," Dareus said. "I'm happy for the guys that have been there and fighting with me to get things going to where it is now and get the opportunity to get in the playoffs."

What blew his mind was learning Bills defensive tackle Kyle Williams, whom Dareus still calls his "work wife," scored on a 1-yard run that would turn out to be the winning touchdown.

"But we were having a great time, reminiscing and laughing about how fat he looks in his uniform."

Williams said he and Dareus have a "special relationship" and he's eager to see him Sunday. "I wish him enough luck to get second place on Sunday," he said laughing.

"I just think of all my teammates, I haven’t poured into anybody as much as I did him," William said. "Any time that you’re around this game long enough, you’re always going to have friends that move on, coaches that move on. It is what it is. Obviously, I’ll see him, it’ll be special to see him."

Pats on the back are over now that Dareus works with the enemy.

Asked about it, Dareus put his hands on his hips and feigned indignation.

"I'm not sharing anything," Dareus said. "What are you talking about, sir? Next question."

He reasoned he played only five games for new Bills coach Sean McDermott and defensive coordinator Leslie Frazier, and they've likely changed a considerable amount of their schemery anyway.

"We just won the division, No. 2 in sacks, have the best defense in the NFL," Dareus said, his sarcasm-soaked remarks drying into a deadpan. "I mean, I guess if you want to call that boring. Just typical being at the top of the league."

Dareus was an All-Pro in 2014 with Buffalo and went to a pair of Pro Bowls. In Jacksonville, he's a complementary player.

He recorded 21 tackles in his nine Jaguar games, playing 50.1 percent of their defensive plays. Of his 278 total snaps, he played slightly more than half against the run. Pro Football Focus charted him for two quarterback hits and four hurries.

Dareus had one total tackle over back-to-back games against the Cleveland Browns and Arizona Cardinals in Weeks 11 and 12, his third and fourth games with the Jaguars.

"Early on, he came in and was playing like they play it in Buffalo," Jacksonville defensive coordinator Todd Wash said. "Well, we play a little bit different. So it's taken him a little bit of time to understand what we want out of him."

Wash claimed character issues haven't been a concern. Jaguars coach Doug Marrone reiterated Thursday what he said when the trade went down, that Dareus never was a problem for him once inside One Bills Drive. Marrone benched Dareus for the first quarter of a game and the first half of another at the end of 2013.

"But since he's been here, he really comes in, he studies, he learns it, he's in individual meetings with the coaches to learn the techniques. He's become a student of the game.

"We're very impressed with what we're getting so far."

The feeling has been mutual.

Dareus has been kind when talking about his former team, but admitted the change of scenery has been good for him.

"From the time I got off the plane," Dareus said, "the sun hit me in the face, had the palm trees, had the sun. 'I think I'm gonna like this.' "

"It just gives you that vitamin D, and it's pretty sexy, man. It makes you feel good."