On the Buffalo Bills' flight home from Miami after securing their first playoff game in 18 years, John Murphy called over Bills lineman Kyle Williams to watch the video of the celebration after his 1-yard touchdown run in the Bills' 22-16 win over the Dolphins.

"I called him Fridge (after William "Refrigerator" Perry) and he didn't appreciate that," laughed Murphy.

Murphy liked the nickname I gave him Monday much better. I referred to the play-by-play voice of the Buffalo Bills, as "radio's Kyle Williams."

Murphy actually had suffered through the playoff drought even longer than Williams.

Voice of the Bills John Murphy relishes life after TV

After a decade in his second stint as the analyst alongside legendary play-by-play man Van Miller, Murphy replaced Miller on play-by-play in the 2004 season, two years before Williams was drafted in the fifth round by the Bills.

"I like that, that's a good comparison," Murphy said in an interview. "I love being compared to Kyle. I'm flattered. Kyle is the man."

Murphy celebrated the playoff berth with a peanut butter and jelly sandwich at home in 2 in the morning while his wife was sleeping.

"I went to bed and kind of laid there for a while," he said. "I was kind of rehashing the moments late in the game and after the game and the people I saw and talked to and hugged."

He worked eight playoff games as Miller's analyst over the years, including the last one in 2000 against Tennessee. But he missed all four Bills Super Bowls because he was working at WBEN and WKBW-TV (Channel 7) when WGR owned the rights those years and the stations had different owners.

Murphy, who has been either the analyst or the play-by-play announcer throughout the entire drought, said he has "had fun" and "hasn't been miserable" doing it.

"It was frustrating," added Murphy of being shut out as the play-by-play announcer alongside Mark Kelso. "I might be alone in this feeling. I never looked at the 17 season playoff drought as one block. It isn't really. It is extremely frustrating for fans. There were nine different coaches, a number of general managers and a couple of different owners. Different regimes.

"In some cases, I thought media around here began to celebrate: 'Who is your favorite player in the drought?' Who is the best quarterback in the drought?'  I was like, this is not one block of time ... I was frustrated but I never looked at it like this is never going to end. Because several times over the 17 seasons, I thought this could be headed in the right direction and it got close a couple of times."

He didn't even get to celebrate the Bills' making the playoffs on the air because Buffalo's 22-16 win over Miami Sunday ended before Cincinnati quarterback Andy Dalton threw the winning touchdown pass to receiver Tyler Boyd to defeat Baltimore and become a Buffalo hero.

"It was awkward," Murphy said of finishing the Bills game without knowing if the Bills made the postseason tournament. "I said to Kelso on the air, 'This is odd.' The Bills just won, did their part. But we don't know how this is going to end up.' "

"It was an odd position to be in. It did not look good at that point and I didn't know what to think."

Murphy stayed in the booth at Miami's Hard Rock Stadium, watching on the TV monitor without sound with Kelso, spotter Jeff Matthews and producer Greg Harvey.

When Dalton hit Boyd with the winning touchdown, the four people in the Buffalo booth reacted like many Bills fans in Western New York and across the nation.

"We erupted," said Murphy. "We were hugging and high-fiving and pounding on the walls."

People in adjacent booths heard them hooting and hollering and gave them a "thumbs up and pounded on the walls."

"It was nuts," said Murphy.

But they knew it wasn't over.

"We’re sort of battle-hardened after many years waiting for crazy things to happen," said Murphy. "Until (Cincinnati) got that fourth down stop is when we really let loose."

Murphy had many thoughts after being assured that he would call the Bills first playoff game in 18 years against Jacksonville. He was happy for the hard-working players, Coach Sean McDermott and his staff and the fans in Miami and at the game and who met the team at the airport at 1 in the morning on the flight back from Florida.

"I walked down from our booth to the locker room level and I had to pass through some of the concourse areas and the only people left in the stands were Bills fans," said Murphy.

"They were going crazy and people were crying and hugging me," said Murphy. "It was kind of crazy."

The scene at the Buffalo airport was just as crazy.

His wife didn't believe there were almost 1,000 Bills fans at the airport.

"This is self-serving, but I said to a couple of players and (Bills president) Russ Brandon, this is like what the Beatles must have felt like that when they landed in New York in 1964," said Murphy. "You are walking down the steps of the plane and people are just screaming. It was nuts." 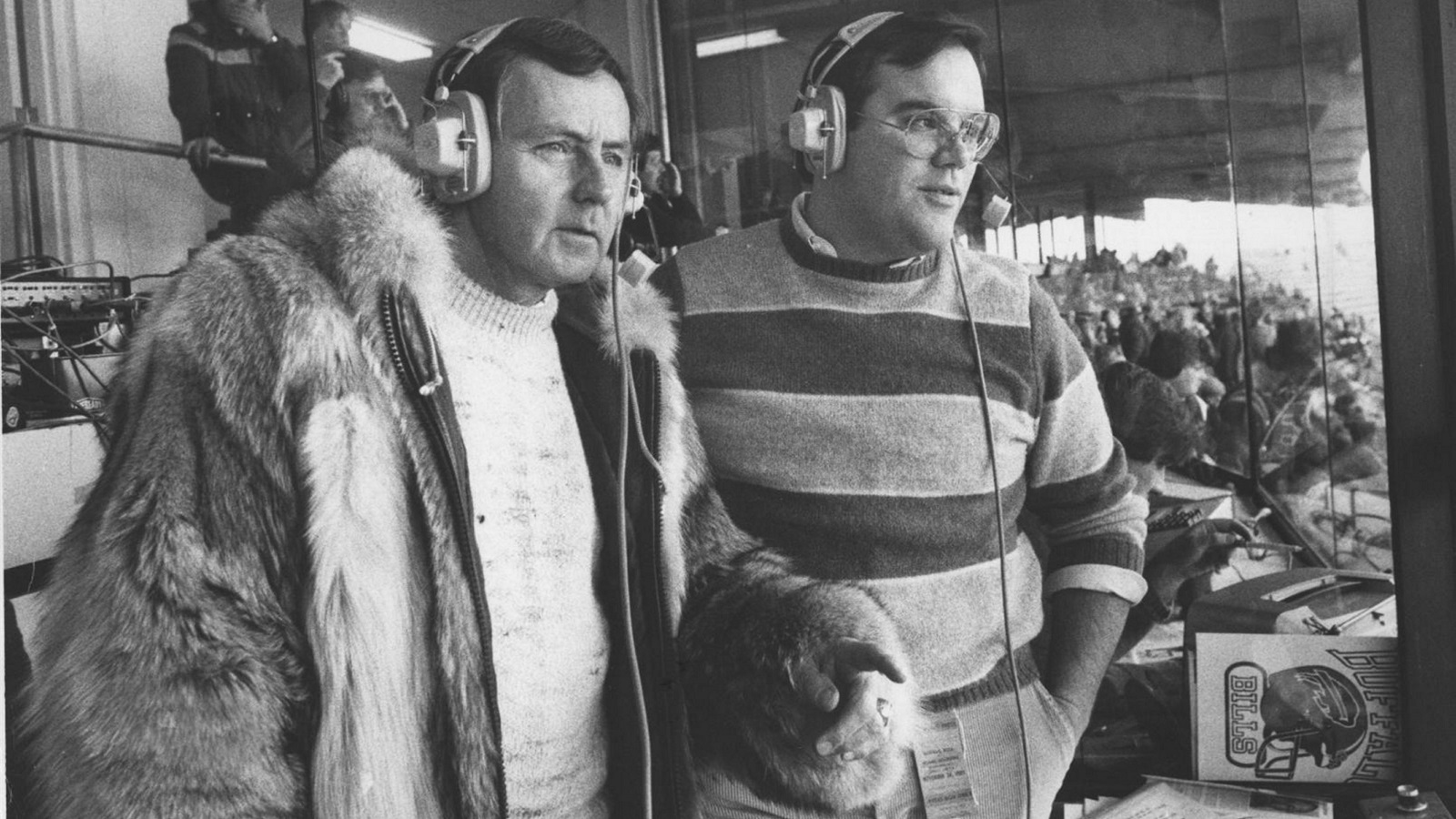 He also thought of Van Miller.

"I think about Van a lot," said Murphy. "His point was – and it bears repeating to me – is it is really about the players and the coaches. We're observers – we're not exactly impartial observers – but people follow these games to watch these players and see how these coaches handle these players. I kind of keep that in the front of my mind, not even in the back of the mind. As excited as I get and as good as I feel, it is really not about us."

Nonetheless, the league's play-by-play fraternity across the league congratulated Murphy. He texted Dan Hoard, a native of Jamestown who is the radio voice of the Bengals games, and asked "who do I talk to about Bengals season tickets?" Hoard texted back "plenty of good seats available."

Bob Socci, a native of Auburn, N.Y. who is the radio voice of the New England Patriots game, texted "congratulations. You guys earned it."

Murphy said he realizes that most Bills will be listening to CBS' Jim Nantz and Tony Romo calling Sunday's game on television. But that doesn't bother him.

"No, not at all," said Murphy. "Whoever is listening to our broadcast, I'm grateful for that and we're doing the game for them."

Kyle Williams couldn't have said it any better.