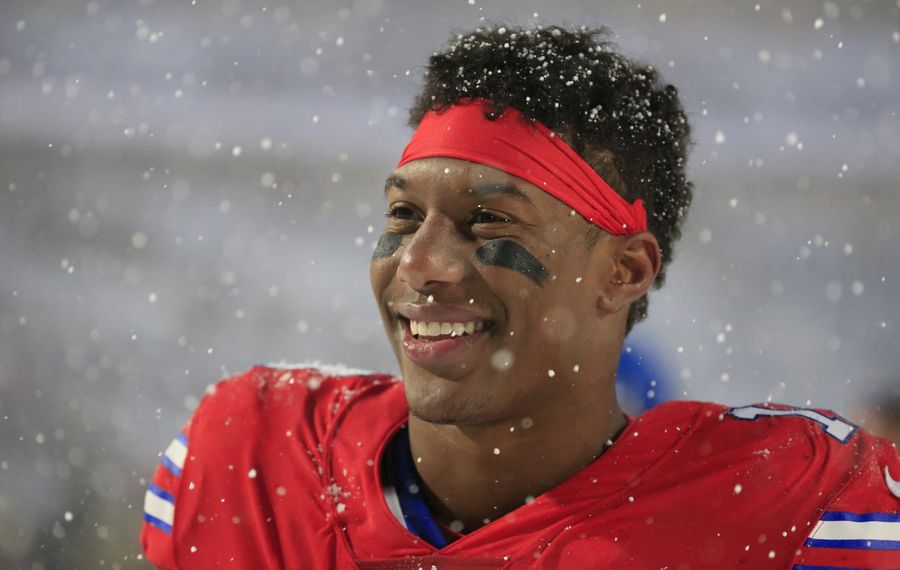 Members of the Jacksonville Jaguars’ secondary aren’t content simply beating opponents – they want them to hear about it, too.

The Jaguars have developed a reputation as some of the biggest trash talkers in the NFL, something the Buffalo Bills’ receivers have caught wind of this week.

“It’s a psychological advantage,” Jacksonville safety Tashaun Gipson told ESPN this week. “Teams come in expecting to be in a battle of word warfare compared to just thinking that it’s just about the game of football. Like, ‘Hey man, if this guy makes a play, I’m going to have to hear him all day.’ That right there should not be anybody’s concern, but yet it is because people deem that the Jacksonville Jaguars’ defense goes out there and talks a heap load of crap. At the end of the day, you’re winning the mind battle right there, and I think that it’s definitely beneficial.”

Thompson said the Bills are prepared for the war of words.

“We've had this conversation in our wide receiver room,” he said. “We're just coming to play. They can say what they gotta say, but man, we're just here to play football. The end of the day, we've got to look at the scoreboard. That'll tell the difference. That's our goal.”

Jaguars coach Doug Marrone said it’s a balancing act between letting his players be themselves and making sure they don’t cross a line.

“People are going to be individuals,” Marrone told ESPN. “You try to conform everyone to be one thing and you might not get the best out of somebody. So at the same point, though, I always tell them, as long as it doesn’t hurt the team — and that’s a pretty broad statement. It’s not just on the field. It’s also in the locker room and everywhere you go, so you’ve got to keep track of it and know where the lines are.”

The best example of Jacksonville’s psychological approach came in early November, when Bengals receiver A.J. Green reached his breaking point with cornerback Jalen Ramsey, throwing him to the ground and throwing punches, earning an ejection in the process.

“Y’all know how I play,” Ramsey told ESPN. “I lock receivers down physically, and then mentally I get into their mind, get under their skin. I talk my talk.”

Thompson said he’ll give it right back.

“It's part of the game,” he said. “Every week, there's some back and forth going on between DBs and wide receivers. We like it. We're going to bring it.”

Bills rookie Zay Jones said his team has to make sure they don’t give the officials any reason to throw a flag.

“I'm not going to try to do anything to entice anybody or influence anybody,” he said. “I'm just going to play the game within the whistle. If extra stuff happens, leave that up to the refs. I'm just going to go play ball. … I don't want to focus too much on that because I don't want it to take away from my game. I need to be locked into what I'm doing.”

The Bills’ safety was named the AFC Defensive Player of the Month for December, joining teammate Micah Hyde (October) in winning that award this season. The Bills became the first team in NFL history to have a safety tandem win the award in the same season.

“They're both very unselfish individuals in terms of their approach,” coach Sean McDermott said. “They've really embraced this opportunity and made the most of it, and I think they're only going to continue to get better. ... It's been fun to watch them really develop over the course of the season. The rapport they've built with one another has been fun to watch.

Poyer, who finished the season as the only player in the NFL with five interceptions and two sacks, was excited to find out from the media that he and Hyde were part of history.

“It’s pretty cool,” he said. “It says a lot about the guys on the defensive side of the ball – all 11 guys. … It’s a credit to this whole team. I’m just sometimes in the right place at the right time.”

Running back LeSean McCoy (ankle) and linebacker Matt Milano (hamstring) did not participate in practice Wednesday. Milano worked on the sideline with a trainer during the portion of practice open to the media.

“I wish he was able to get out there today,” McDermott said. “He wasn't able to do it, so we'll just have to see on that one.”

Bucky Gleason: Bills bracing for Dareus at his best